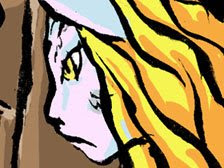 Small Lives is a June zuda comic done by Marco Palombelli. It got a favorite from me for interesting animals and intriguing screen layouts, but the humanoid character art didn't grab me. Here is the synopsis: Ibn is the most important crossroad land between commercial routes that connect west and east. It's a desert surrounded by green hills and tall mountains and it's inhabited by many different tribes. While those tribes don't claim any control over commercial trades in their lands, the biggest trading companies strive for such control and will overturn the tribal economies for it. In this theater of big players the lives of small people weave the course of the events, small lives like the ones of the members of the White Sail Company, a trading company of a distant land shaken by an endless war, which has a secret objective and a traitor among them, a traitor who will do anything in order to free the one whose death has become the seed for a terrible weapon. While the heads of the tribes plan for a meeting aiming to unveil the causes of the recent difficulties between their peoples, other small lives interweave: the life of a fox, whose memories hold proof of the big trading companies' machinations, gets tied to Threeleaves' -an earth jelly trainer- when the animal's memories awaken transforming the fox into an evil spirit. Everything gets into motion when Threeleaves, not knowing that his journey will be more than just ordinary work, will be employed by the White Sail Company in a journey across the desert...

The first thing that hits your reading this comic is the great screen composition on screen 1. It is like the desert is a character the way the narration rolls over the panels. You have a whole screen to use, so why not use the whole screen, Marco grasp's this concept. Text outside of the box -well written- I liked very much here. Seeing how well the animals were drawn, and how grabbing this opening screen is made me wish the whole focus of the comic would have been on these animal's lives no talking anamorphism needed. it would have been more daring, and more interesting than pirate traders and crow people. The were-fox going for revenge for the dead baby foxes (a particularly well done screen 6 and esp. panel 7) was a nice touch. The animals drawn in this style have an old school classic strip look to them. The people the creator drew looked like background characters from the Ed, Edd, and Eddy cartoon. The animals were the strong suit, the introduction of people a down turn. I liked the map style red letters letting you know what/where everything was on screen 2. The third eye was also a good touch on Threeleaves. The ant people were fine, but the character designs for the rest looked too much like a cartoon. The Captain had a red farfalle beard I just wanted to rip off his face Ivan The Terrible style. It's a serious story in these 8 screens (wanna' be pretender jelly trainer running off aside), and I like contrasts. Either go with a serious art style (like the foxes), or go exactly the opposite direction with a humorous art style (the people) -don't do both in the same comic even by accident. It's hard to read the letters in the small screen, but the dialogue does a fine job on introducing you to this world, and a fine job on the characterization of Threeleaves. I liked the thought balloon on screen 4. The dialogue was good for the Captain, all the rest of the characters just stood around, but they weren't the focus of the first 8. Given enough screens I'm sure Marco could get me to care if they live or die -which is the ultimate test of characterization. I just don't like the look of them. The profile view of a nose, a mouth, and a forehead Screen2/panel2 and screen 8/panel 2 in particular is something I wished the creator had stayed away from.

The Shepperd is supposed to be the hero, but I was rooting for the foxes

Which explains a damn nice bit of drama when their is a confrontation between these two forces. I don't want to spoil anything for anyone, but screen 5 is a well done action screen which would have been fantastic with more blood/gore to bring that serious point home. Which leads into the acid trip flashback kick ass transformation on screen 6. Marco's closes things out with a furry joke, and Mister Crow talking too much, but he hasn't talked yet in the comic comment. The transformed fox also shows up looking for revenge. The layout of screen 8 was too cartoony for me, and lacked any of the impressiveness of the first screen. A victim of a classic zuda pit fall it gets less impressive as the screens click by, not more impressive. The inbred spawn of Captain crunch and his merry red shirt crew [<- Star Trek reference], didn't help the story with me. it grabbed me good enough for a favorite, but not enough for a vote. The characters design just doesn't measure up to the foxes. I would like to see Marco try again at zuda (if he doesn't make the comeback), and no way in hell should this comic finish dead last in the rankings.
No. Way. In. Hell.
Posted by RKB at 4:59 PM