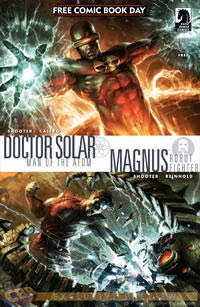 Jim Shooter is bringing them back, Gold Key lives! Doctor Solar, Man of the Atom, the new series from Dark Horse comics is in stores as you read this. Magnus, Robot Fighter, new series is scheduled to begin on August 4. Other Western/Gold Key characters also scheduled to get another run from Dark Horse are Turok, Son of Stone, and the least well known of the lot: Mighty Samson. For a preview before you buy of Doctor Solar go here. Doctor Solar is written by Shooter of course, and drawn by Dennis Calero. Magnus is -of course- written by Shooter and drawn by Bill Reinhold. The blurbs on the Dark Horse led me to believe Turok, Son of Stone will also be coming out this year. One of the coolest features, that pays a appropriate amount of respect to history, is the reprinting of the original first issues of the title in each of the latest series. If you haven't checked out any of the Dark Horse archive editions for these Gold Key/Western characters it's a nice preview of what you've been missing. 48 pages for the new Solar#1, 56 for Magnus, at $3.50 for each title. I went through a flood (really it was some 'Noah get the ark out one one more time' kind of mayhem) to get my free comic book day Doctor Solar/Magnus preview issue. Of course I enjoyed both of Shooter's stories, but the art for Doctor Solar from Dennis Calero was too generic super-hero-ie for me. Calero having X-Men: Noir on your resume isn't much of a credit with me. Calero's Solar has too much of what I would call the Jim Lee/David Finch style fluid super-hero art. Solar shouldn't like the type of hero who would get into a fist fight with the villain. The old Gold Key Solar and some of the Valiant run, had what I would call -stiff super-hero art- which is charming to me and suited the character. If Calero was more of a throwback to the original issues  in his style I would have enjoyed it more. I know taste in art is idiosyncratically subjective, but I appreciate frozen moments in time that don't show every character  to have the poise of a Kung-Fu master. That should be saved for the straight up ass kickers like Magnus. Context matters, Magnus needs to look like he could jump off the page and punch you, or use his martial arts to scrap rogue robots.  Russ Manning's excellent art work for Magnus was the most action filled/fluid super-hero Gold Key ever got, and Reinhold's rendering hearkens back to that perfectly. Shooter is a amazing writer, if it was up to me he would be running Marvel again, so you know I'm a fan happy to read his work again. Magnus was awesome on both fronts, and maybe Dennis Calero's style will grow on me... 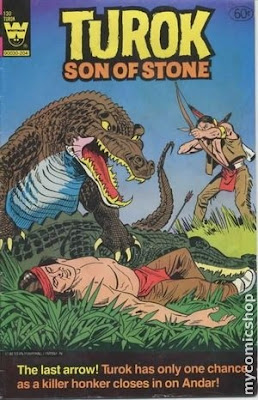 Turok, Son of Stone, the next book to be brought back by Dark Horse, is another character that was brought back before at Valiant comics. Turok's comic book run before the upcoming Dark Horse series was cut short (along with so many others) by the abyss of Acclaim's bankruptcy. Turok the video game franchise has continued on, and given him more mainstream exposure than any other Gold Key/Western hero. Jim Shooter's view of the new Dark Horse Turok series:
Turok, Son of Stone tells the story of two Pre-Columbian Native Americans swept away by a force beyond comprehension to a Timeless Land.

Turok is Algonquin, born in what is now Quebec.

In his time, no native of North or Central America has a metal weapon except him—a seax, or Viking long knife, made of Damascus steel, given to Turok by a Norse trader whom he befriended during his sojourn to Newfoundland, where Vikings came to trade and forage, and where Viking settlements once stood.  The seax is an heirloom, handed down through generations to the trader from an ancestor who, as a mercenary for the Byzantine Empire journeyed as far as Baghdad.  Another gift from the Norse: while in their company, Turok learned the art of making composite bows with bow staves reinforced with sinew and bone or horn that can propel an arrow nearly half a mile, like the legendary bows of the Turks.  At closer range, they have devastating power, unrivaled by any wooden stave bow.  There is not the like of Turok’s bow in the Americas.

He has traveled far.  Along his path, Turok learned much from the shamans he encountered: first, the secret language they share, but more importantly, that most of what they do is trickery and illusion—though some things he has seen he cannot fathom—and most importantly never to fear the unknown or unfamiliar.  To do so is to give power to the tricksters or more power to what is real but strange.

To banish fear is to be formidable, almost unconquerable.  Now, if he can just keep the young, headstrong Chiricahua Andar out of trouble….

Turok is strong, capable and skilled.  Just a man, but what a man.  Best of all, he’s smart.

There is a new force in the Timeless Land.  A fearless man who will find a way.

[From Jim Shooter interview on ifanboy] 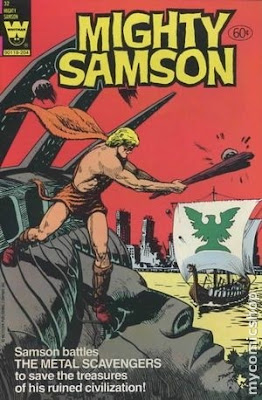 The least known of the new series is Mighty Samson. Mighty Samson had a original 32 issue run between 1964 and 1982, the Dark Horse series is the first time since that the character has been brought back. Mighty Samson Archives from Dark is set to be published October of this year.
Shooter's view of the new Mighty Samson series:
500 years after the end of the world….

Amid the ruins of a once-great city, scourged by mutated monsters, marauders and savage, sub-human predators, the primitive N’yark Tribe, ekes out a meager, fragile existence.  But from among them arises a champion, gifted with prodigious strength—a warrior who can strike dead the most fearsome beast and stand one alone against a thousand foes.  Named by the Speakers of Ancient Lore, he is called the Mighty Samson—the last great hope of human kind.

Thermonuclear destruction nearly ended life on Earth.  No one knows how or why it happened—the answers are lost in antiquity.

At first, the few survivors tried to preserve the shattered remnants of civilization, but soon the struggle to merely maintain existence exist overwhelmed loftier goals.  A new Dark Age descended upon the world.

Small bands of survivors gathered.  Some united into tribes.  One such tribe, called the N’yark, occupied the Island of Broken Towers.

The N’yark Tribe suffered hideously for many generations, preyed upon by monstrosities against which they had no defense, hunted by semi-human carnivores and forced to pay tribute to powerful, marauding tribes from the north and west.

As his mother wished, Samson becomes the champion and defender of his people.  He means to help them survive, thrive and lay the foundations of a New World, safe from the horrors of nature perverted, and the brutality of the wicked.

“Upon the Earth walks he who slays behemoths with his fist.  Stone and iron yield before the strength of his sinews.  A thousand warriors cannot stand against his strength.  It is given unto him to deliver his people from the beneath the yoke of their oppressors, and no force under Heaven can stay him from his destiny.  He is called the Mighty Samson.” – From the recitations of the Lore-Speakers in the first year of the Age to Come, at the dawn of the Fourth Millennium.

My first exposure to most of these Western/Gold Key heroes was the old Whitman comics 3-in-1 bag reprint editions of Turok, Solar, and Mighty Samson. I was lucky enough to come across a old Gold Key Magnus in a pawn shop having a 'going out of business sale' of all things. As long as Shooter was at Valiant it was a pleasure to read Magnus, Solar, and Turok's new adventures, but the quality suffered after his departure. Creators like: Otto Binder, Frank Throne, Jack Sparling, Russ Manning, Robert Shaefer, Eric Friewald, Paul S. Newman, Bob Fujitani, Matt Murphy, and Alberto Giolitti all set a high standard Jim Shooter has already proven he live's up to. If you want to talk about being 'in good hands' the Gold Key/Western characters are in good hands again. I look forward to reading these new titles, and hope plenty of other readers will as well.