Zuda Review The Adventures of Doc & Shok/ If the synopsis doesn't fit... 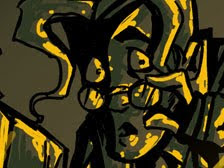 The Adventures of Doc & Shok is another March Zuda comic done by Dustin Evans. Here is the synopsis: Doc is an intelligent minded scientist on a quest. He seeks an answer to his family history that has led to his destiny as a paranormal creature of the night. He keeps his secret locked away and dares not to reveal it to a soul. Shok is a simple minded and lazy fellow, who just happened to answer a help wanted ad in the paper to help fund his addiction to quality ale and jump start his own brewery. Little did he know, he would find himself faced with a true Dr. Jekyll and Mr. Hyde for a boss. Shok's daytime job, working for Doc, eventually forges an unlikely friendship between the two. He is faced with quite a dilemma, once he realizes his friend and employer is a creature of the night. The two mismatched pair quest together to find an answer to Doc's dark history in a medieval world filled with modern technologies, danger and horror. Sharika, a haunting and alluring woman claiming to have psychic powers, appears in the village of Tarbon. Her brother was last seen in the village and has since gone missing. She is immediately branded an outcast and finds solace in the company of Doc & Shok. Doc feels drawn to Sharika, but Shok believes there is more to her beauty and charm than she claims. While Doc frantically searches for an answer and cure to his condition, the town's villagers grow increasingly more suspicious of him and his two companions.

I know it's easier to change the synopsis than the story. I also know most people could care less about the synopsis. I do care, so here we go:

There are a lot of directions you can go in with the synopsis, mostly back story, re-cap the events in the comic, mostly a preview of the future. The best which gives you a little back story, tells readers what's going on now, and gives a hint to the future of the story -which matches up well with the comic. In the 8 screens of the comic some of the most interesting parts of the synopsis (and story going forward), don't even make the slightest appearance. Doc, Shok, and the readers meet a monstrous, murderous family  that never gets a mention in the synopsis. It probably ties together with Shok finding out Doc is a Dr. Jekyll and Mr. Hyde type, and the start of his quest into his 'dark history'. The comic ends on a 'danger-hook'  with the characters and readers about to see more of momma monster than just a tentacle. I guess in the course of escaping/fighting the monster family the Doc would change and the rest of the story would take off following the synopsis lead.  Reading that synopsis readers are going to want to see the Jekyll and Hyde transformation, and it would have made for a more impressive ending than the 'danger-hook'. The Sharika character takes up a large portion of the synopsis (and it seems future story) it would have been great to have at least some cut scenes or a one panel cameo. It's only 8 screens a big part of the draw is going to be the Mr. Hyde transformation and seeing that aspect of the character, it would have been even better if it could have showed up without being spelled out so plain in the synopsis. I know creators in past have been able to edit out too many spoilers in the synopsis, I don't know if this is just at the editors invitation, or creators can put in a request. In any case that's too much type in the synopsis not to lead to premature dramatic ejaculation.With 8 screens and the possibility of no more than that if you don't win, end on the best possible dramatic hook with the Jekyll/Hyde transformation in progress. I know 'adventures' is in the title but it's too much Holmes and Dr. Watson-esque without that other good Victorian style twist. You have scary art, a bound to be impressive scene of the Doc's transformation, only 8 screens to grab readers, so why not use it?

What the secret tunnels exploration in the screens did do was allow for some nice dark and moody art, with great use of lighting in the colors. I enjoyed the various lighting effects even as I wondered when Sharika was going to show up. The monster daughter revel was well done, as was the 'there's something behind me isn't there' gag. I enjoyed the art, but it's the coloring done on the comic throughout that made it so impressive. There was some nicely written banter between the two principles, but a little too much of it without the beginning of a Hyde reveal. The letters were all completely readable.  Well lit, good dialogue, but it ended on a humor line instead of the start of the Hyde reveal. A victim of screen 9 syndrome, when the story looks to really pick up in the screen you don't see unless the comics wins, or continues on somewhere else.  If the interest in the comic does result in getting a first issue published it should do very well in another longer format. Had it been Doc & Shok the first 8 pages of a 22 page comic it would have been great story structure, but it's Zuda and some of the potentially best parts of the tale got left in the synopsis.
Posted by RKB at 3:44 AM 2 comments: