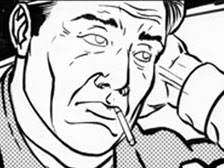 Sketch Me, Deadly is a June zuda comic done by newcomer David Gerard Miley. It got a favorite from me, and here is the synopsis: In the early 1950's, Ralph is a Private Eye, who was once a police sketch artist for the LA Police department. The Law has been trying to catch a Mob Boss in the act of criminal activity. The Crime Lord goes to Lacoste, France and so does the LAPD. Along in the villa of Lacoste, Ralph and the LAPD follow the Crime Lord. During his stay Ralph meets a beautiful woman named Bebette who owns a cafe in the villa. Ralph and Bebette have a wonderful relationship until he finds out Bebett is the daughter of the Crime Lord that they've been chasing. The LAPD rushes in immediately to take down Bebette and her father. The Father refuses to admit defeat and defies until a brutal end. Bebette gets shot during the gunfire of her father's gang and the force of the LAPD. Ralph returns to LA, and decides not to be in the LAPD anymore. Doesn't want to remember the past. He settled for something smaller and become a Private eye. Three years have passed and Ralph receives a mysterious letter. A description of a face someone asked him to draw. Later which brings him back to the drawing board to solve a dark mystery. The art reminds me of Charles Burns, so you can't go wrong with that. The inking style, the black and white all reminded me of Burns, I'd be interesting in knowing who David's influences are. The creator here makes use of a number of involving narrative techniques and screen compositions, that impressed the hell out of me and hopefully others. It also had two narrative gaping black holes that left the story not really qualifying for cliff hanger status.

Nice homage in the title, I figure some character is bound to say "kiss me" in this comic

The private eye former sketch artist part to this story was a nice twist that fits the comic medium well. We get a nice cinema style opening that leads into a close up on some shoes, which leads our startled lead Ralph into a flashback. I like the physical objects trigger memory sequence. One of the real shining moments was the Bebette 'interlude'. I figure this was the intent of the creator but on screen 3 panel 1 the town was done in a 'sketch artist' style different from the regular comic. Nice touch that fits the character. The real life questions crossing the demarcation line of his day dream, was good transition to the next screen. I hate text box thought balloons, but they are a noir feature, So keep them on point, and well written. Which is exactly what David did on screen 5. I loved the screen composition on screen 6. All of the panels helped to add to a great layout. The use of the woman's reflection, along with Ralph peaking through the window made for memorable imagery. The last panel was a particularly disturbing visual of Ralph. Panel 1 screen 8, why is Ralph always sprinting wherever he goes? The ending of a persons description brought the sketch artist point home again. That wasn't much of a ending though.

Where are better hints of the crime lord and Bebette's presumed fate? I love and always read the synopsis, but not everyone does. The consensus of opinion seems to be people don't want to have to read the synopsis to really get the story. To someone who doesn't read the synopsis the Bebette and her crime lord father angle is just completely lost. It's easy enough to gather things didn't end well for the happy couple from the flashback. A panel or two of more visual clues of how its end was related to Ralph's job wouldn't have been a bad idea, it would have been a smart one. Something in the comic showing the crime lord dead as a door nail could also be helpful, the description at the end of the comic sounds like it could be the crime lord, but that's just a guess on my part. You only have 8 screens if the shocker is crime lord and maybe his daughter could still be alive, we need to see that in the comic. 'Ralph starts to draw the sketch and is shocked to see it's the thought dead crime lord', that would be a mystery based cliff hanger. This is my second favorite comic this month, but leaving it in the synopsis failed to grab me enough to get my vote. Seeing Ralph's apartment (cool drawing board) just doesn't have that much of a impact even after reading the synopsis. I think the art/letters/wordage/ are all top notch which is why it's disappointing as hell it didn't fit the zuda format better. Just a panel with a hint of the fates of Bebette and the crime lord could have made a difference. Noir is all about the payoff (or the promise of it) which was a case here of getting to the end, and thinking you missed something important or the creator didn't put it in.
Posted by RKB at 10:07 AM