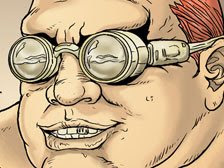 Fallen Hunter is another Zuda comic in the contest this month. Wai Kwong Chan is the creator, here is the synopsis: In the far 2020, life on earth is beyond current imagination: with destructive human activities, it falls into a piece of chaos due to wars and natural disasters. Not much species survive under the harsh environment, namely human beings, war-oriented genetically modified man, human-alike android, and super human (human being with evolution) etc. The only way for any of them to survive is to kill, to hunt and to take control - so as to eliminate others and squeeze their chances of living.

The art's not a problem, but it's not enough

Everyone has their favorite age of comics. For some it's the Silver age, or Bronze age -hell I'm sure somebody out there even loves the Dark age of comics. For myself I love the Golden age, but not so blindly I can't see one of it's most annoying faults. Instead of showing, or telling the reader something a creator decides to show and tell. Meaning you see a picture of an action, and dialogue or text describes just what you can see in the panel. It's redundant and the creator of Fallen Hunter does it twice: Screen1 in panel 4 the text repeats what we already knew thanks to the text in panel 1, Screen 7 panel 4 didn't need the wordage the readers saw what happened. Their were a few translation issues this comic had, but not that many. If Wai wanted he could just pass those slight errors off as the way people talk in his world, no harm no foul. Their is a thought balloon on screen 4, which I'm always glad to see considering the alternative. The rapidly changing word balloons squares, ovals, bursts, for the same characters made no sense. For yelling I can understand the bursts, but on the first screen regular conversational tone we go from a oval to a square. This aspect of the comic is important, and needs some style consistency. The story had a amazon equivalency show up at the end, but nothing catchy in this post apocalyptic tale to get my enduring interest. I don't expect any author to reinvent the wheel. A creator at least making a attempt to change the tires would be appreciated. Meaning don't just do the typical comic we've seen a thousand times before, try to put your own spin on it. I saw nothing in Fallen Hunter to set it apart from other wasteland/Road Warrior style stories. We didn't even get but one explosion in the 8 screens. Their was some humor with the dog, but putting a cherry on top of a cliche doesn't make it more interesting.

How 'bout those fight scenes?

The single lead facing a group of opponents has been done on Zuda before. It's a classic set-up to some action filled scenes which readers get with this comic. The designs on all the characters are fine which helps to make the fight scenes more interesting. A missile being fired up into the air by a dead opponent, and blowing up the leads transport as the fat bad guy falls dead was the highlight of this strip. Good sequential art unencumbered by dialogue for screens 5 and 6. Showing bullets (or darts) suspended mid-air makes for a lame looking panel 2 on screen 7. That visual trick doesn't look good when any artist does it in any comic on Zuda. Panel 3 screen 7 where the lead is feeling the effects of some drug is another example of good design. The comic ends with Scarlett making a guest appearance to help a outback babe carry off Rusty, our lead. Decent danger/mystery cliff hanger ending, but nothing special about it. The only way Wai had to avoid the big criticism of 'seen it before, nothing new here' was to do something to surprise Zuda readers. If Rusty had been killed instead of put to sleep by the bad ass babes that would have been a twist. If Rusty and Lazbomb the dog had fried up the fat man, and started eating him, that would have got my attention! Not just shocking acts for the sake of them, but doing something (anything) unexpected that would leave readers completely unsure of where the story is going -but wanting to find out. As it stands I doubt this comic can get out the votes because it seems too easy to guess where things are headed in screen 9.

[Rusty teams up with the girl's (and maybe their tribe/camp) in due course, to fight against whoever marked him as a wanted man, is what I'm figuring.]
Posted by RKB at 11:41 PM