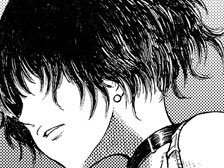 The Last Werewolf is a June Zuda comic by SEDNA-STUDIO a competitor from China. We have major translation issues in this, very impressive art, and a interesting enough story. it got a favorite from me, but I couldn't vote for it because of the language issues, and another comic I liked more. Here is the synopsis: The Last Werewolf tells an adventure story about a female Bounty Hunter Christina and one mysterious detective Brett. The two of them together will trace the dangerous underground organization called "G". Shortest synopsis in zuda history???

The creator is not a native English speaker, and it shows in the dialogue of this comic. The translation went off the rails in a major way somewhere. It also knocked this comic out of the running for my vote. This isn't a judgment on the quality of the words. I'm not saying the dialogue is too bland, or too heavy handed, too wooden or has too many adjectives having a orgy in a word balloon. It's a judgment on my ability to understand, and Sedna didn't pass the native speaker test on making the words sound 'right'. Sound right meaning someone could possibly say the lines in the script if the right opportunity presented itself in real life. Sedna would have been better off to do the comic in his native language and let other readers figure out what was happening from the context. That would actually have been less distracting to me than trying to figure out what Sedna was trying to say. The one place where a loose grasp on English could have been a great help in the style of the story was with the news robot. At first I thought the creator was going for the 'Yoda effect'. Yoda effect meaning you have a character with different physical aspects from humans speak in a unusual manner to further reinforce those differences and add to the characterization. Considering the current state of news papers in the United States I can only imagine most will be gone sometime in the near future. So using a outdated glitch ridden robot to be a paperboy would make sense. Then I read further down the panel and discovered all the characters speak this way. You need help with the translation just post a thread in the zuda message board and I'm sure any number of people would offer to help Sedna or any other creator. I needed help with a Spanish translation and Juan and Andres helped me. I'm sure Sedna would have had a number of options to chose in making his comic sound right. As it was I think I can figure out what Sedna meant to say, but it pulls me out of the world he created to have to re-translate things. You know how annoying commercials can be -well it's like that. If anyone needs help, or just isn't sure all you have to do is ask on the message boards.

Everything else is fantastic

I liked the 'Yoda' like robot, and the weird to my ears sound effects. 'Wong' for the dog barking and the 'Hoorraaayyy!!' for the confrontation. This along with the robot shows their can be some advantages to a few miss-translations. If only that issue was limited to sound effects and robot speech patterns. The story of a cop finds a monster, plus some weird Underworld style babe isn't shockingly new, but the art is amazing. The letters are easy to read, and the creator brought the action for the cliff hanger ending on screen 8. I loved the design of the villain, and the expressiveness of the faces of the characters. Sedna here makes the most out of the space he has in 8 screens, all of the panel composition helps to build towards the end. The art work done on the dismembered corpse was very effective, and throwing the body parts at Brett -nice touch.
The art is fantastic, and the story has promise to get even more interesting. The translation issues are the only thing holding it back, but their enough to cost Sedna a win. I hope the creator tries again (this time with translation help) if he doesn't win this month on zuda.
Posted by RKB at 8:46 PM