Beyond The Borderlands was a January Zuda contender finished last in a nine comic race. It was created by Brian McLachlan, here is the synopsis: In a low-fantasy world, heroes wander Beyond the Borderlands of the civilized kingdoms looking for adventure. Tree-man Norn and sword scholar Moriarty Muscletooth find an empty graveyard that leads them to an even creepier empty town. Jellyfish Cove has been cursed by the MerKing with eternal winter. While the town is mostly abandoned, there is one sorceress who has plans to fight back against the fish folk. Meanwhile the wandering heroes uncover threads of a deeper plot afoot.
This is a sword and sorcery story of intrigue and action. The setting is a pseudo-feudal world where people of various skin tones mingle. There is a sense of history with ancient legends, ruins and thriving cities. People commonly take up the wanderer's life when they don't want to be nailed down to their parent's profession. Think of adventurers like musicians in the real world. Some are wannabes, some are DIYs, some are rock stars and some are has beens. It's just the monsters that will kill you, not the heroin.
The Jellyfish Cove story arc follows a group that's beginning their first great tour. Spoiler alert - In the full-length story you will meet parasitic vampires, a werebadger and a beautiful young necromancer with a heart of gold.


BORDERING ON BOREDOM
The synopsis biggest hook was recasting fantasy adventurers as the musicians of our day, but this high (good) concept wasn't realized in the 8 screens. Too many screens were wasted on tip-toeing through the tulips -so to speak- to get to the mausoleum on screen 4. The two lead characters are  Norn some kind of fantasy  creature -could be a wood sprite- and some other unnamed wizard sort  spend the first half walking and engaging in some pointless dialogue. They spot a mausoleum and wander off -slowly- to check it out, arguing between themselves if they should give it a look. Some of the back story of the synopsis is revealed and you see some 'sword scholar' magic on display with the human looking of the two using his powers. None of that adds up to enough reason to spend half the comic on set-up, it's a fantasy comic the characters should have been walking through that door by screen 2. It's only 8 screens in a Zuda contest, you need to hit the ground running in the telling of the story if you want to win. The colors are okay, lettering is legible,  the art has moments of showing a Mike Allred influenced style that's not a problem to me. The pace does pick up during the exploring of the mausoleum, turns out a sarcophagus is empty and the cemetery hidden beneath has had all the bodies removed  by underground tunnels leading to the surface, which established a nice mystery. The pace immediately gets slowed down again by the comic ending on the adventures following tracks to the abandoned snow-pocalypse town of Jellyfish Cove. I understand the characters following the clues to solve the mystery, but the last screen was so devoid of good layouts/dramatic action it left me wondering why I should care what happens to this comics leads? If your going to end on a abandoned town  do something a little atypical in the layout from the rest of the comic to let readers see something screwy is going on.  Having 4 itty-bitty squares showing empty beds and abandoned food  is less than impressive, it's boring. Nothing about the last screens layout would ever reach out and grab readers, and you want to end on a high note. 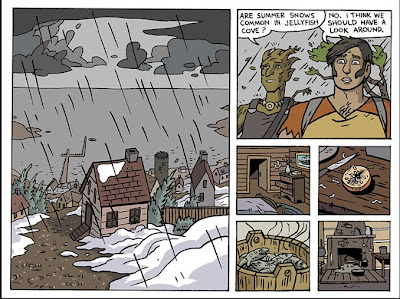 A full screen of a creepy looking snowed in town would have had more impact on readers instead of the 'one side of a small Rubik's Cube' style ending McLachlan went with.

IF THEY HAVE THEIR OWN FORM OF SPEAKING IT'LL MAKE MY FANTASY COMIC WORLD MORE REAL RIGHT?
Where things go wrong is Brian McLachlan trying to create his own slang to help add realism/ extra layers to his story - I guess... It's been done before and failed before on Zuda instead of striking a note of originality it just turns off readers who don't get what the characters are talking about. It also isn't needed in only 8 screens save the experimental dialogue for if you win, deliver as good as story as you can without a self imposed handicap of oddball fantasy speak. The classic example in this comic is the line "Help me a hand" which just sounds awful. I used to play D&D, I've read Lord of the Rings, I understand the feeling of wanting to immerse readers into your world by having unique dialogue, but you have to fight it. It just doesn't work on Zuda because of space limitations, it's not that big a draw in these types of stories anyway, and there are always a few who wonder if it was written so clunky in spite of a creators effort instead of on purpose. Having your own terminology for a comic on Zuda doesn't do anything but make it harder for you to win past contests have proved this. The best part of this comic was Norn in the tunnels. The coloring was well done, and his thought balloons made him sound like a regular person. The more fantastical elements included in a story the more 'real earth' your characters should sound as a counter balance. Norn's thoughts in the tunnels were perfect "Many men mine for gems and gold, but bodies...? What creeps within this crypt?" see those lines had the flavor of made-up medieval, but weren't twisted around so much as to make readers think the creator was trying too hard. If the 8 screens had shown more of what was in the synopsis in a dynamic way, less ostentatious dialogue,  the comic would have finished higher than it did.
Posted by RKB at 12:53 AM No comments: