Zuda review The Urban Adventures of Melvin Blank/ Never mind a witness, can we get a character count limit on comic titles at Zuda? 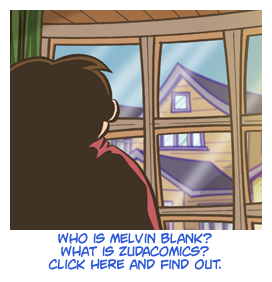 The Urban Adventures of Melvin Blank (thank you copy paste), is a comic by Bill Williams and Thom Zahler competing on zuda. Why in the word did the creators include the words 'the' and 'urban' at the beginning of the title? Here is the synopsis: Melvin Blank has the mind of a child and the strength of a brute. After the passing of his parents, he lives in his Mother’s house in the heart of a big decaying city. He works as a dishwasher at a nearby greasy spoon and he has his urban adventures as he travels to and from work. Melvin thinks its hilarious that the mass transit system he rides, the City Area Rapid Transit System, is called "the CART", but he doesn't understand why a nearby diner is called "Joe Mama's". In a world of grays, Melvin sees things in black and white. Good and bad. Day and night. Cereal and pizza. Melvin is pretty sure that the house down the street is haunted, but don't worry, he plans to do something about it. He is in love with a beautiful co-worker who has an abusive boyfriend, for now. He is selling items from his parent’s estate to pay for an elaborate headstone for the pair. At home, he has an angry cat named SOCKS and he never, ever misses SPACE PATROL RANGER. Melvin is absolutely sure that he is living the American Dream and he wants to share it with the rest of the people in his neighborhood whether they like it or not. The first story is a complete eight screen story. It has a beginning, middle, and an end. Melvin is like that, he likes things simple. Melvin Blank features a script by Bill Williams (SideChicks) and art & colors by Thom Zahler (Love & Capes). 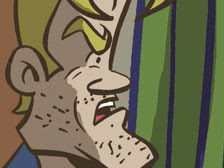 The most damning thing a person can say about a zuda comic, is the thumb nail does it justice

The best thing about this comic is the writing which could go in any direction. The color scheme killed my interest deader than hell. A problem for the writer and artist is they went for the later on 'big reveal' of Melvin. You want readers to connect with character, we have to see his face sooner than screen 7. How much we like/know Melvin will decide how much we like/ want to read this story, don't make it a mystery. The art didn't grab me, it seemed a typical example of what I would expect to see. The good part was Kasey's expressions was he seriously slightly remorseful, or just playing Melvin? I think his angry scowl in the last panel tells that story. I like strong contrasts in comics, or taking what you would expect to see to the next level. Which in a strip like this would mean going in one of two directions: photo realistic artwork, or what you would expect to find on a mom's fridge times 10. No photo realism -okay fine-, but the art work actually wasn't cartoony enough. If we're seeing this world through Melvin's eyes it would have been a fun trip if the art work played into that more. Perspective out of whack, every body's got a big head, super bright colors... Instead of surprising me and impressing me, the artist's style didn't push any envelopes, or take any risks. It's possible with more screens my view would change, but you only get the 8 to go by. For whatever reason Zhaler's other comic Love and Capes looks a lot better to me. Same guy, same style, so what's the difference? Pre-set expectations for the genre/theme/mood of Melvin's adventures being met but not surpassed. The story does have some layers to it -could go pretty deep-, but then there's the colors. The coloring job looks like it was done by Rose Art crayon's, which makes the colors look faded, muted, - even neutered. If an inanimate ethereal object like a color scheme could suffer that fate.

The script was more impressive than the art, how often does that happen on Zuda?

The text box thought balloons were limited in nature, and well written. I was wondering where Melvin's face was from the get go. The dialogue for Kasey was well written, and damn threatening in the context of the story. It's pretty obvious Kasey thought he was going to take advantage of him, and I was happy to see the tables turned. I also like how Melvin tricked Kasey into a situation to take him out. The text accompanying the full page shot on screen 7, was damn fine characterization. The "made me eat pizza", was a good line and a nice set-up to I'm a hero just like you. I would have liked to have seen more panels in the entry, but it was still a good script from Williams. Bryy was right, the more times you read it -the more you see in it. After a few reads this was another comic I couldn't get past the color job cutting into my enjoyment of the strip.
Posted by RKB at 4:41 PM