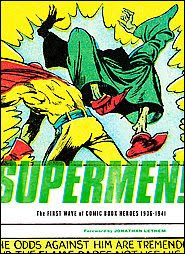 Supermen! the first wave of comic book heroes 1936-1941: Is a collection of comics edited by Greg Sadowski and published by Fantagraphics. It has the stereotypical and expected forward done by Jonathan Lethem. In various interviews Sadowski has said he doesn't care for the golden age heroes fighting the axis powers which explains the point where he ended this collection. It also explains his comments about maybe doing another volume from the pre WW II period of comics. A few comics got cut like the wonderman story, and the Comet's first appearance, from the preview he gave various reviewers. That Wonderman story could be making an appearance in a Esiner book Sadowski talked about doing. If you have a hankering for golden age downloads (I usually do) become a member at Golden age comics then head on over here. You can also catch some of the stories that didn't make the cut in the Supermen book, and read more of your favorite semi-forgotten characters. I do understand the limits of page counts in print. Supermen does have a wide ranging mix of character types, art and story styles, not to mention genres, it's not all the cape and cowl brigade. It addition to early superheroes, you have sci-fi, horror, and adventure elements.

The characters who I had known about before are: The Flame, Stardust, Comet, Fantomah, Skyman, Claw, Silverstreak, Daredevil [one of my favorite golden age heroes] Spacehawk, and Blue Bolt.

It was a thrill for me to be able to hold this book in my hands and read the stories that way instead of only off my computer screen. [micro-fiche makes me murderous] I was also surprised by my reaction to some of the stories. A character I had always wanted to read turned out to be a bit of a let down, in other cases I read impressive stories by creators I never would have known about if it wasn't for this book.

The Flame: from Wonderworld comics was a surprising letdown for me. I first saw the cover to Wonderworld comics #7 years ago in Overstreet and always wanted to read that story, until I read it. It's got a great plot with a zombie like (but not actual zombies) race discovered and put into bondage by our villain. It has a few really impressive panels Greg Land or any other artist couldn't go wrong doing a homage to. The story and art is by Esiner and Fine, but it doesn't get the job done grabbing me as a reader. I even like The Flame's gimmick -a flame gun. In the case of this story the collaboration of these two great talents just didn't add up to being a fantastic story. Yarko the Great by Esiner on the other hand was a damn impressive all the way around story in the Mandrake the magician school of characters. You get another magician story in this book Marvelo which has great art thanks to Guardineer, but the light on entertainment story by Fox proves again that 'names' don't always hit it out of the park.

The Face: & SkyMan: My favorite finds in this book were the artists Mart Bailey on The Face, and Ogden Whitney on Skyman. [A character I had heard about, but never had a chance to read] Gardner Fox turned in a good story for The Face, and Bailey's art is amazing. I agree whole heartedly with Sadowski that the art work of Bailey was key to The face's staying power. The Face is one of those characters that just needed a few more bell's and whistles in the gimmicks department to make it a impressive character. Whitney didn't thrill me with his plane drawing skills in Skyman, but I was impressed with his style in drawing the characters.

The Comet: Reading the Comet I see where Stan Lee got the idea for Cyclopes. His way of holding his visor to blast someone is just like Cyclopes did it in the early days of X-Men. The change from a blast that melts someones head to force beams sounds like a comics code adaptation. Comet's first appearance was pulled for his third appearance, known for the body count of those he killed here Comet kills two crooks, two cops, and blows up a cop car thanks to being brain washed. Comet does have a interesting history that Sadowski goes into in his notes, being the first superhero killed in the line of duty.

The Clock: was another surprise to me, an early vigilante that actually doesn't kill his opponents, or at least says he doesn't. You would have thought damn near every hero in the golden age was a serial killer, and you would be right. It's nice to know that back then creators were zigging while others were zagging.

Blue Bolt: by Simon and Kirby is in no way as entertaining to me as their run on Captain America Comics, but it's still a fine read. I happen to love the superheroes versus the Axis powers period in comics for a number of reasons. If your the type of fan that doesn't care for golden age heroes fighting the good fight, or love Sci-fi as a genre you will probably gravitate more towards Blue Bolt.

Silver Streak (the hero named after the comic which was named after a car) reads like -I shit you not- what if you crossed The Flash with MacGyver? It's another one of those stories that turned out to be a let down, but now I know.

What is good art in a comic book?

Here's a quote from a SciFipulse.Net interview: Sadowski: I guess the most revelatory thing was in seeing that the vast majority of what was printed in those days was garbage. There’s probably less than ten percent that’s worth revisiting. Some have written that I chose artists strictly for their name value, but the truth is that after you’ve gone through hundreds of golden age books, the same guys stop you time after time: Cole, Eisner, Everett, Fine, Hanks, Kirby, Wolverton, and every now and then a few others. That’s how they became “name” artists in the first place - because they were the best.

This same fine fellow (who as I understand it is doing a book on Centaur's publications heroes), says that the 'vast majority' of comics stories was garbage back in the day? Want to walk that bullshit statement back some Greg? If my spidey sense was cynical it would tell me if the sales are there Greg will find enough material to do a volume three. This was a needless insult to a lot of may they rest in peace creators in defense of a charge that not only is true, but Sadowski doesn't need to defend against. The truth is Greg spent more page space in the book for names instead of hunting for the next Fletcher Hanks (Fero the planet detective aside), because names do sell, their is a market for comic legends early hard to find work, and the book comes with a price tag because people need to get paid -otherwise no more books. Fletcher Hanks didn't become a name artist because he was one of the best. Hell until fairly recently Hanks wasn't even a 'name' at all. Sadowski missed his chance to find the next really unique, not technically proficient creator in early comics and make that person a star. If you slap the 'outsider artist' label on someone the art doesn't have to be good in the conventional sense, just a 'out there' rendering of a creators own vision. I should say I think Fletcher drew Stardust ten feet tall because he wanted him to be ten feet tall, not because his technical skills were so poor he didn't know better. If it's true Sadowski had trouble finding comics to include not because of their scarcity, but because of the quality of the work why not send up a help flare in internetland? Threads here, there, and everywhere asking for suggestions, maybe even get a number of pairs of eyes to read over the proposed content with him. Their could also have been some value in showing some of those 'horrible' stories of that era (wonderman), to knock off that halo of awesomeness that has developed around the comics of the golden age.

No I don't want my money back

The looking for names debate aside, it's a damn fine collection. I am a huge Daredevil fan so of course I loved that one of those early Silver Streak stories got included in this book. I found out about some really impressive artists I had never heard of before. My focus tends to be on the period of the golden age immediately following this one, so my curiosity to see what came before played a major part in my purchase. The end notes are very well done and insightful into the creators, especially the creators who used aliases. If you have a interest in the golden age of comics you should give this book a purchase, and Sadowski should stop giving interviews.
Posted by RKB at 12:25 AM