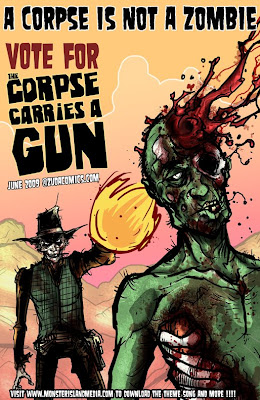 I love the weird west!
The Corpse Carries a gun is another zuda comic submission from veteran zuda creator Matthew Petz. It got a favorite from me, a vote, and here is the synopsis: Its name is spoken in hushed tones. Campfire tales tell of a spectral avenger cursed to walk the Earth and exact bloody revenge. "THE CORPSE IS UPON YOU!" a horse cry howls through lonely canyons and across parched salt flats. It has been walking for 60 years; saving the innocent and murdering the guilty. Pitiless retribution doled out by a six-shooter, eternally clutched in a rotted fist! Killin' and rightin' wrongs, It is hunted by some, and feared by all. The vampire bats, eerie winged devil things, help point The Corpse and its phantasmal six-shooter towards the retribution it MUST dole out. Aided by The Bear, a beast that commands respect, it alone would unnerve the prairies... but when The Corpse comes to town upon The Bear's back...there ain't no chance in this ninth circle of hell of an outcome other than bloody. The Corpse is the incarnation of all that is terrible. Haunted by Its task, It cannot waiver. It must continue to roam, no matter the cost. The same elemental force that drives It's hip cannon, gravitates It towards the weird and lulls the grotesque to it. Giant Crabs, Hoodoo Dinosaurs, Time Travel, Indians, Aliens, and beyond. All must reckon with THE CORPSE!

Yet another zombie comics rant of mine

The corpse carries a gun is not a zombie comic for a very simple reason. Zombie comics are not about the zombies, they're about the mortal human survivors struggle to keep on keeping on. This comic is about a animated corpse who is a vengeful wraith out to right wrongs, but the corpse is the obvious lead. Should a whole bunch of brain eating zombies show up and the narrative focus change to normal folk -then it would be a zombie comic. I love the way this comic ended: vote for me or you may never see these stories! Then we see our title character crossing paths with a T-Rex, Indian Princess, and The Corpse with a laser gun out in space! Talk about weird west pulp fiction this is it. I know Dan (Pathnine) talked about the same basic idea, and I welcome more creators to do things along these lines. The first seven screens are all about the character, and I loved the characterization. The letters are easy to read, and the colors are phenomenal! The art was impressive to me throughout the comic. Three panels really stood out at me: screen 2 panel 2 was stark as hell. Screen 6 panel 3 is a damn cute bear cub and I don't even like animals. That 'fella must have been a sick sick bastard to want to kill the poor little thing. The full page shot on screen 7 of the Corpse riding on the bear in a Long Ranger and Silver style poise -I only wish the creator would have zoomed in on them for more impact and shown a little less scenery. Riding a bear and being led by bats really adds some bells and whistles to the revenge from beyond the grave stereotype. I only wished when we saw that body hanging, The Corpse could have been rubbing at a Hang'em High style scar on his neck. With all the different elements here your invoking a bit of the feeling old Heap stories have for me. Considering the fact we have a undead avenger here, their is a appropriate amount of people getting their heads blown off.

No matter how cool a comic is (and this comic got my vote), doing the old third person text box narration is always going to be a more passive read. I understand sometimes the way stories are set-up that is the direction you have to go in, but it still takes longer to grab readers than stories that throw you right in the middle of a well written exchange between two characters. I guess the only other way you could have done it, would be some villain that knew The Corpse's history doing a voice over to go along with the visuals. If the Corpse isn't going to talk that much maybe leave off the narration after this and let readers draw their own conclusions to his motivations.
I've written before on the three types of story structure I see on Zuda. You have Cliff hanger ending stories, complete in 8 screen tales, and lastly you have the movie trailer overview, which is what you get here with Corpse. I happen to like the overview way of doing 8 screens, but judging by comments here and on past comics it's the least popular way to do things, if slightly more common that complete tales. The objective of the different story structures is of course the same -to get you to vote for the comic. The question whats the best way to go about doing that, which also fits their own personal style. I'm guessing from Petz's comments the history of the Corpse is involved, plus you don't want to give it all away. So we get a quick peak at his history, his ways of operating, and a nice touch preview of some of the Corpse's future adventures. It got my vote and you should give it a read.
Posted by RKB at 12:26 PM