Zuda review Mark Wolfchild/ Oh Joy! Those evil corporations are up to no good again... 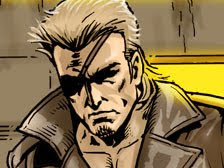 December Zuda review for Mark Wolfchild done by Li Shi Peng and Davidlevack. Here is the synopsis: Chicago in the future is just one city suffering from the woes of the world; Overpopulation, rising water levels, and food shortage. This demands a new breed of detective. Enter Mark Wolfchild, known as a Reconciler. Equipped with a high speed computer capable of analyzing forensic evidence at the scene of a crime and cross referencing data in the blink of an eye implanted into his brain, Wolfchild still has a long way to go before he’s the next Philip Marlowe or Sam Spade. Ever since the Vandenburgh case, he’s gotten by on laurels, good looks and charm. You see, even with all of the clues compiled and given to him on a silver platter, Wolfchild has an unfortunate penchant for putting two and two together and getting six. It's a numbers game before everyone discovers what Mark Wolfchild already knows; he’s made a career out of getting lucky. Chicago's finest are puzzled by a grisly and bizarre multiple homicide on a train which leaves the suspect dead and seems to come back to an average looking ash box. While investigating, the mystery deepens, as things turn horribly wrong for Wolfchild. He's swept up into a nightmare that leaves the police squad hunting him down and forcing him to lay low while looking for answers. He takes to the dark alleys and seedy underbelly of Chicago to avoid detection but his reputation precedes him with the criminal element. It's the toughest case of his life as he battles thugs, the police, debt collectors and inadequacy issues. Even if he manages to come out from under this case, it remains to be seen if he or his career will remain in tact.


The art's real pretty, but then you read the words 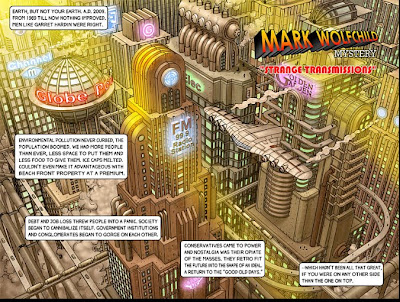 The above is the first panel, fantastic artwork accompanied by  lame as hell population control/global warming/evil corporations at it again, in a text box narration political screed/ Cyberpunk 2020 RPG adventure comic adaptation. The evil corporations of the future/ alternate time line thing is a common genre, creators want to pull any weight with that you would be better off setting it in the here and now 2009 we know to bring a element of realism. Considering how screwed up things are these days the creators could have wrote a post apocalyptic present almost. "Debt and job loss threw people into a panic, society begin to cannibalize itself, government institutions and conglomerates begin to gorge on each other". You could apply that text to any government today in the here and now instead of in Metropolis. In these times -at least for me- this kind of science fiction has no ability to grab me as a reader. The ice caps melting, population control elements, might make the rowdy boys in Copenhagen rabidly read on, but it repelled me. Lucky enough the comic did get better, the recovery wasn't sufficient to earn a favorite from me, but it ended with a nice Hitchcock suspense vibe. The letters are easy to read, and the colors fit the comic well. Screen 2 is a text box thought balloon intro to the main character Mark Wolfchild. It was a good enough way to introduce him, with a 'meet his girlfriend Madeleine' mini-cliffhanger to click to on the next screen.Screen 3 had some nice panel layouts to go along with the narration which was a checklist of his cybernetic enhanced abilities. The screen ends at the scene of the crime with a police detective bemoaning Wolfchild being called in. Screen 4 is Wolfchild's arrival -cloaked in mist or exhaust fumes- with a little light banter with the cop in charge. The screens with readers and Wolfchild just about to find out what the mystery is.

Panel 1 has some nice perspective of 5 dead victims splayed out on a train car, the garbage arranged on the ground leads viewers eyes to take in the whole scene. It is a well done gruesome scene with a nice amount of blood and evident violence which gets readers to wondering what happened? We see Missy the call girl who looks like she was choked to death, Angelo the pimp with one of Missy's high heels stuck in his eye. A couple with bullet wounds who died from aspiration. Lastly is Kevin Ranney, who looks like a mild mannered geek but mysteriously started all of this. Well done screen layout for depicting the carnage, Wolfchild's bionic eye analyzed there deaths but came up with a 'syntax error' on Kevin Ranney's C.O.D., hence the mystery. Screen 6, another great layout, you have a series of panels that show the 'security footage' of what really happened. Kevin opened a stage box, then choked Missy to death, and stabbed Angelo with her shoe. Angelo fired his gun the bullet hit and killed that couple, in through one and out the other. Wolfchild examines the box and finds a little Madeleine doll inside. The close up view of the doll was a nice touch, and the implied threat a good reason to click to the next screen. The doll says "what have you done loverboy" and Wolfchild runs out of the room, meanwhile in a panel with the cop we see the box is really empty, and the doll was just in Wolfchild's mind. Wolfchild is freaking out as he rushes to his car, finding Madeleine's body in the trunk in the same poise as the doll. A 'heart broken' bumper sticker on the car was a nice touch. If Madeleine had actually talked to Wolfchild in the 8 screens and we had seen a little of there relationship, the death would have had more meaning than just a plot point. It's a good plot point for a mystery, but why pass up a chance to get readers to identify at least a little with the character. Any future flashbacks to Madeleine with a pulse (I'm guessing at least a few are predestined), would have been better set up. The cops show up on screen 8 to arrest him, and Wolfchild gains and loses pupils over the course of three panels. In a surprising move, Wolfchild seems to have the ability to shoot one of his arms off to attack the police with. This leads to a misfired ricochet bullet that appears to hit a future S.W.A.T. cop right between the eyes. Nice set up to the Wolfchild on the run sequence should this comic win. Mark Wolfchild would have been better off without the horrible worded start. I also believe the story could have been redone for a better fit on Zuda within the 8 screen limit. Too much text box narration, and not enough focus on the suspenseful weirdness at the end. Screen 5-8 range from very good to great, but the drag from the start was far too much to overcome.