Zuda review Villain/ superheroes and villains on Zuda, -no really that's what it is

December Zuda comic Villain is done by Gregory Smallwood. This comic got a favorite from me, and my vote. Here is the synopsis: Terry Allen has the ability to manipulate energy. He can absorb it, channel it, or redirect it. It’s a powerful gift but, instead of using it for good, he uses it for profit and destruction. Under the guise of Shockwave, Allen commits high profile crimes and amasses a small fortune. But money and power are not enough to save him from earth’s premier superhero team, The Overmen. Caught during a diamond heist gone awry, Shockwave is given a life sentence on the prison planet, Atticus. Located in a parallel universe, Atticus houses some of the world’s most dangerous super-villains. With no guards and a super-powered prisoner population in the hundreds, it is a dangerous world where only the strongest and most ruthless survive. On Atticus, Shockwave is forced to confront his own nihilism and choose sides in a fight that determines the survival of earth.


I want to see Shockwave come back to earth only to lose again, otherwise it could just end up being a sanitized version of Wanted

In 8 screens this comic doesn't put a new spin on things, but it does make a very entertaining read. Considering some of the other comics this month, that counts for a hell of a lot. The story opens with the lead character fighting  this universe's super hero team. Screen 1 is a nice action scene, with text box thought balloons that get into Shockwave's villain logic. Screen 2 is a nice fight scene with this world's Superman stand in and some very well written 'it's all about me' text box though balloons. I also liked the flip put on the classic Spider-Man line in this comic, Shockwave's view: "With great power comes the opportunity to make your own rules". Less is more with the narration, cutting down on some of his 'deep thoughts' might have got the point across even better. The art is very well suited to this comic, and the colors make it even better. The script is a fun read, and the letters are all legible. Screen 3 reveals Shockwave was caught, and is being held at the 'Overmen' headquarters. Shockwave is defiant, but here you find out he is being shipped to the prison world Atticus. Screen 4 finds Shockwave has fallen silent, the 'Major' hero takes time to rub it in, but before he  leaves Shockwave vows to come back and beat him up. There are a number of ways this comic could go, should it come back for the win, none of which are really tipped off in the 8 screens. 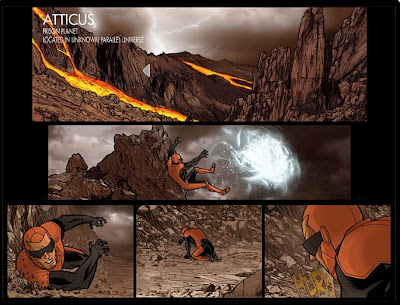 Which gets to the heart of the quandary in a story like this. There's only so many ways for the story to go at this point, course I give the creator credit who knows what twists he might have in mind. You could go the reformed villain route, or a less extreme version of Wanted where he comes back to win. For a surprise Shockwave could actually not get off the prison world. His opponents on this prison world are going to have be even sorrier than he is, to make me want to root for him to survive. There's no history, therefore no need for a villain popularity pissing contest to determine the 'winners' which is what DC's prison planet comic turned out to be. I enjoyed the artwork on screen 5, nice design work on Atticus. Screen 6 is Shockwave's first meeting with the natives, which featured some cool sound effects in panel 2. Shockwave avoids getting blasted by a guy with a cannon for an arm, and his scary looking partner.  On screen 7 you find out the guy with the gun is named Arsenal, and the other fellow is a speedster named Speedfreak. They say there the welcoming committe, and Shockwave prepares to fight. In some well done action scenes the speedster starts smacking him around. In screen 8 Shockwave gets some good one liners in, nice dialogue,  as the comic ends with him blowing up Arsenal's gun arm  accompanied by the screams of "NOOO!" This comic meets all the minimum genre expectations in this story. From the quality of the initial 8 screens I take it on  faith Villain will have a number of interesting twists by the time it gets to screen 60, should it win. Great potentil from a cool start, in a area of subject Zuda is short on, won my support. Best of luck Gregory!
Posted by RKB at 12:22 AM