Zuda review The House Always Wins/ I'm hoping the house actually does win, would be a nice change... 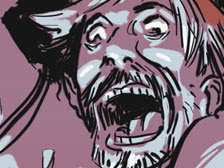 December Zuda comic The House Always Wins, is done by Josh Hechinger and John Bivens. It got a favorite from me, here is the synopsis: Season seven of the realty reality show “Fix or Nix” is off to a bad start. In seasons past, the decrepit houses the show takes on have been known to have rats, or roaches, or inexplicably huge piles of junk inside. Fair enough.

This time, the house-in-question appears to harbor a malevolent spectral presence that violently murders anyone who enters it.
To safely solve the mystery in time for sweeps week, the producers have hired “The Hermit Detective” Raleigh Porter, a crime-solving genius who never leaves his house. Assisting Raleigh (re: doing his legwork) are Charlie Albarn (rugby talent turned forensic scientist), Jeff Lovering (black market anatomist), and Jackie Laika (a psychic pretending to be merely uncannily observant).
They’re a team of genuinely gifted crime solvers. They have a track record you could build a house on (no pun intended).
They are hideously out of their depth, and horrible things are going to happen to them.

As the story starts off you're immediately hit with the fact the colors do an excellent job of setting the mood. Tying together a home improvement show with a haunted house is also a nifty idea. I really enjoyed the start with a plumber kicking back, and dropping plot points in a more natural way than you expect to find on most Zuda submissions. I have to give credit to some fine writing as the suspense played out across the screens. John Bivens is a Zuda vet who always delivers in the art, Marvel/DC/Dark Horse should get in touch with him already. I was also impressed at the characterization we had for the plumber, from the way it started (forgetting the movies Psycho and Scream) he could have been a main character. We get some humor, find out he's talking to his son he sees on the weekends, ends up with more of a tug at readers when he gets whacked by the end of the comic. Much better treatment than some of the Zuda contestants, where even main characters come across as red shirt card board cut outs, no one cares about. 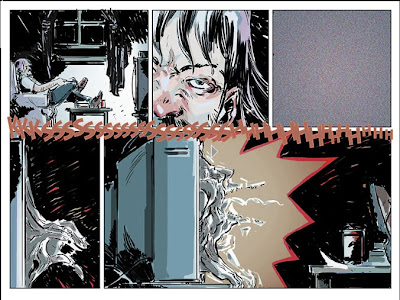 Readers are led into Screen 2 by a T.V. going on the fritz sound effect which runs the duration of the above screen 2. Great layout, no dialogue, no pointless as hell narration, if you have an artist this good let his work speak for itself. The strange entity coming out of his T.V. screen (I like the Ring riff) frightens him into action in screen 3, by smacking it over the head with a pipe wrench. Much like bringing a gun to a knife fight, you just know it's not going to end well. Screen 4 has a nice 6 panel action sequence of the plumber bashing the hell out of the T.V. I was really impressed with the way it was colored, and how well the artist and writer work together to make the story better. Once the T.V. is good and crunched the plumber lets his guard down, which we now from every horror movie is a sure sign the danger isn't over.

Is it wrong I want the house to kill them all, if for no other reason than a change of pace?

Screen 5 was some more amazing art, in such a well placed story. You just see a gnarled up hand placed on the plumber's shoulders from a bestial figure in shadows in panel 2. Panel 3 is a close up of the pipe wrench dropping out of his hands, it's not hard to figure this is it.Great silent screen, from the look in the plumber's eye you know he's scared shitless, no need for him to have a conversation with himself. Screen 6 features the 'hermit detective's' team (starting with tough guy turned forensics specialist Charlie Alban) going over the scene at the plumber's house. The plumber is sickly green, stiff as a board corpse by these point in screen 7, a fact the anatomist Jeff Lovering attests to. Porter also 'appears' here as a voice telling Lovering to stop shaking. Screen 8 we actually see Raleigh Porter watching three monitors asking the psychic Jackie Laika what she sees. The fact Jackie is: a psychic pretending to be merely uncannily observant, is a nice flip reworking of the Psych T.V. show  The comic ends on a appropriately scary moment with a demonic skull superimposed over one of Jackie's eyes as she has a vision. There was maybe one screen too many devoted to the team, but the writing/dialogue, and the art were fantastic. Given a win I doubt it gets, I would enjoy every screen as I followed this comic. Look forward to seeing the creators back in Zuda.
Posted by RKB at 5:56 AM