Zuda review SubSuelo/ Everything was going along okay, untill the Lazer Tag rejects showed up 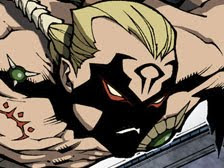 SubSuelo is another December Zuda comic done by Alfredo Rodríguez and Gabriel Rodríguez. Here is the synopsis: Román’s parents died when he was just a kid. He swore to himself, from that day, to protect Aura, his shy little sister. Today, as never before, his promise will be put on trial. Román stumbles into an adventure that will take him through parallel dimensions, fighting dangers never imagined before.


Haven't all the dangers of parallel dimensions been imagined before by now? 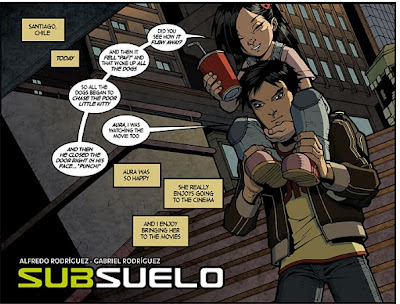 It begins awesome enough, with a nice screen of a little girl and her big brother. The conversation where a young girl repeats all her favorite parts of a movie she has just seen to her much older brother reminds me of some real life conversations with my little sister. Fantastic art and colors throughout this comic, easy to read lettering, and the dialogue was well done. You still need a good hook/reason to vote  to end on and grab readers which doesn't happen with this comic. There are definitive amounts of cuteness on this page, you do care what happens to Aura from screen 1, and you get some character development for Román as well. With such a happy start to a Zuda story your just waiting for bad things to happen. I wish that level of engaging suspense with this story could of held up for the entire submission. The suspense held through screen 2 with the text box thought balloons (which weren't over done thankfully) revealing how Román is Aura's guardian and protector. There is too much white all around the panels with the artist not taking full advantage of the layout possibilities, but the art inside the panel managed to convey a lot of emotion in the characters faces. In screens 3 and 4 Aura is worried and afraid talking about how someone is coming after her. The screen ends with Aura pointing at this new menace which is a excellent way to get to get folks to click to the next screen. On screen 3 we see the villain (at least I guess he's the villain) It's a good entrance coming out of the shadows to a extreme close-up with a nicely designed character. The problem of too much white space 'look at all that bare screen there' is again very evident on this page. Screen 4 gives a nice action shot of the villain in panel  3, and Aura wanting Román to get away in panel 1. The last panel for some reason shadows out Román face except for his clinched teeth and angry eyes. I guess it was supposed to show his anger, but instead took away a regular guy's real humanity -channeling Todd McFarlane is not the way to go here- which the comic established back on screen 1. It was a distraction that did the artists who draw emotional on  faces so well no favors.


If it would have been more like X-Files meets Without A Trace, and less The Golden Child sans humor with super villains -it would have got a favorite from me

Screen 5 is another screen with too much white space around the screen. The first again has the characters faces covered in shadow. The panel layout was actually good I liked the insert shot of Román face in reaction to the bad guys powers. In the first panel the bad guy creates a portal to get past  Román then, appears on the other side grabbing Aura. The bad guy in question looks like the Grifter with War Blade's claws so he's cool all around. He can also shoot force beams which he does at Román in screen 6. It's a good action scene that actually shows  Román's face and how worried he is for his sister. The various energy effects and someone bouncing ass over tea kettle were also well done. Screen 7 is where it all goes wrong for me. This story could have been a fairly serious, and kind of rare for Zuda, missing child tale with a regular guy going up against a super powered opposition. Instead in screen 7 we got some kind of spider creature and a babe who both look fresh out of the Lazer tag Academy porting in at the last second. I guess the purpose of screen 7 was to introduce a love interest for Román, and more explosive fight scenes. The potential for a unique story got tossed so the multi-dimensional police could show up. The draw of the art and story isn't big fight scenes with blasters going off in all directions isn't the big selling point in this story. A regular guy who doesn't get inducted into the cause and issued a blaster facing forces overpowering him could have been. There isn't any emotional hook when your working the parallel worlds angle, it becomes just another Sci-fi shoot'em up.It ends with Román hating his failure to protect his sister, and the Lazer Tag 'pardner's' vowing to chase the bad guy down. A smaller scope story focusing on  Román's attempts to track down his sister could have been a great thriller. The prospect of "an adventure that will take him through parallel dimensions", isn't something I want to follow along for. A bigger scale doesn't always make it better, and interesting heroes don't always have to save the world.
Posted by RKB at 7:18 PM