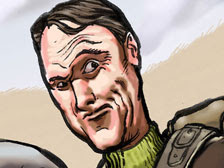 December Zuda review of Daemon's sphere done by Andrew Hartmann and coppervines. Here is the synopsis: Introducing Reginald Daemon: a specialist in tracking and acquiring artifacts of extra terrestrial origin. It is 1957, the height of the cold war, and Daemon’s superiors, in a top secret, unnamed organization within the American government, have given him the task of keeping these artifacts out of Soviet hands. With the help of his friend and partner Steve Ross, a veteran of the Pacific conflict during World War II, he travels the globe, one step ahead (and, in many cases, one step behind) those who would have the artifacts for themselves. This time though, the artifact he seeks is something far more powerful and far more dangerous than any he has sought before. If he fails, it could mean much more than the destruction of the United States...the fate of the entire world could be at stake.


Is everyone in this comic whispering, or are all see through word balloons the start of a bad new trend?

Seriously, I kind of like see through word balloons to stand in for the old style whisper balloon, but not for every single piece of dialogue in the comic. The art has a nice distinctive style, and liked the coloring done on this work. I also really appreciated a 'silent' first screen with no excessive text box narration gumming up the works for pointless prattling. There aren't any words needed for screen 1 because the panel layout does a fine job of letting the reader know what's going on. A group of three obvious adventures parachute in and pull out a map. In screen 2 this merry band climbs up a hill and down to find a abandoned destroyed church. I was impressed with the layout of this screen especially the art in panel 4. In panel 3 Steve Ross makes a Jack Benny reference and then in the last panel you see the story takes place in 1957 at Tunguska, Russia. In screen 3 A Aztec looking symbol is found hidden on a wall which opens up a underground passage way. In a nice little cliff hanger moment the third person in the party pulls a gun on a nervous Ross and Daemon. I enjoyed the fact the comic move things along at an initial good pace for Zuda. The only problem is most times Zuda contestants move things along too slow in there entry, this is one of the few times where by the end events are rolling out too fast. Screen 4 shows a nicely stylized action scene, with Daemon telling the Russian agent he hid his accent well, but forgot something, before knocking him out. Daemon then admits to Ross he actually didn't forget anything, that was just the first thing he could think off. I could have just as well done without the motion blurs for the fight scene, but good panel design -especially with the last panel. 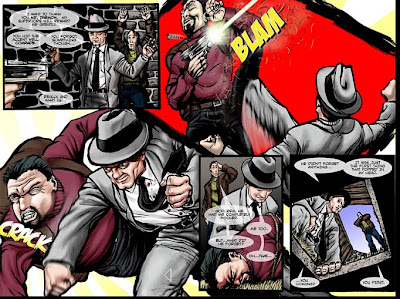 Indiana Jones did adventure stories with great effects in color, Laura Croft supplied the T & A quotient, what does this comic add to the genre to stand out -aliens?

Every story has to face the test of once you fulfill peoples genre expectations, what do you do differently to stand apart from all the others who have gone before you. In this case it seems intended to be a alien tie-in with the flying saucer scare 1950s' backdrop.  Screen 5 is another good action scene with Daemon narrowly avoiding falling to his death thanks to Ross. Some great angles and views where chosen for this screen's layout. Daemon figures out where the device, a glow-e-tablet thingy, was hidden and they go to make there escape only to be caught by the Soviet's. Some cool character drawing in the last panel as a annoyed Daemon looks at Ross as he asks the question: "have these guys forgotten anything". Didn't care for the word balloons, but I appreciated the good dialogue all throughout this comic. In screen 7 we cut to the Antarctic ocean and a man and woman on the deck of a ship. She's propositioning him, he's looking trapped, until she see's something shocking you have to click to the next screen to find out what it is. Screen 8's big reveal looks like a ancient ship trapped inside a glacier. This gets into my main problem with this comic moving too fast. I'm sure the Soviet's will take the tablet back, only to have Daemon steal it back from them, that's to be expected. With Daemon finding the tablet so quick, and the introduction of that ship, it seems to be piling on with bigger artifacts equal a broader, and better story. Or, it's going to be a scavenger hunt with one object leading to another, and then another, and another... I'm not attached enough to feel any sense of accomplishment on behalf of the characters for finding the tablet in only 8 screens. It would have been a better cliff hanger to me to end the comic with the heroes about to go into the tomb, or about to go in search of it. I don't know that if this comic won it would change moving on from one strange object to the next, without the page count necessary to really appreciate  Daemon's success or failure. I really didn't like the ship being brought in when things were just getting good with Daemon. The two screen closing vignette distracted from what should have been the whole focus with only 8 screens for the story, and led to speeding things up too fast to get to it.
Posted by RKB at 8:58 AM