Note: There will be plenty of links all over the place in this little missive, which gives greater details about the various people/entities involved. I'm trying to stick more to my views about the history, than a retelling of it. A wealth of information can be found on the Atlas archives site, most especially Jon B. Cooke's article, which was a great help to me in writing this. 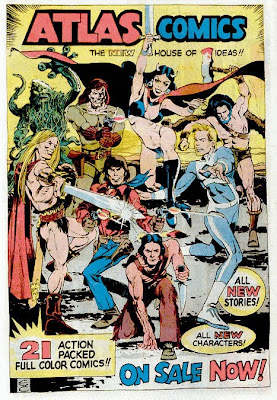 A LITTLE BIT OF THE HISTORY ANYWAY

Atlas/Seaboard was a plucky little comics company back in 1974 started by  Martin Goodman (founder of Marvel comics) to either make money, get revenge for his son Chip being fired from Marvel, or both -depending on who you believe. The story is before Martin sold out he made the new buyers (Cadence) promise to keep Chip Goodman on as editorial director of the comic books. Supposedly Stan Lee (Goodman's nephew by marriage) did some corporate maneuvering and got Chip kicked out. Having read about some of Stan Lee's golden age era antics as he climbed to the top, I have no trouble believing he could do a better than fair impression of a snake in the grass. Martin Goodman  wanted to go head to head against Marvel by offering better deals to the creators, and apparently copying the style at Marvel he helped develop. To assist him in the effort he hired writer/artist Larry Lieber away from Marvel, (allegedly Goodman had always wanted a chance to get him out from under the shadow of his brother Stan Lee) and writer/editor Jeff Rovin away from Warren Publishing. With deals that were supposed to include: higher page rates, return of art work, and shared character ownership Atlas went on a talent raid. Some of the names include: Mike Fleisher, Rich Buckler, Archie Goodwin, Steve Ditko, Wally Wood, Neal Adams, Pablo Marcos, Dick Giordano, Howard Chaykin, Ric Meyers, Ernie Colon, Larry Hama, Gerry Conway, John Albano, and Gary Friedrich. Reading the roll call it's obvious they had talent, but the company was gone from the scene by the middle of 1975. The comics line was losing Goodman money, so he pulled the plug. If you pick up an old Atlas comic today you can read about problems Atlas had with newsstand distribution in there own letter pages: "...But boy, are you guys bad distributors! How do you expect to sell comix, get popular, make money, and become numero uno, if we fans can't find your mags? I absolutely combed Chicago -it's a pretty big city you know- until I found most of your mags. If you don't do anything about this problem, I'll have to go back to the mediocrity of your competitors. Get on the ball!" [Morlock 2001 and the Midnight Men #3]  It has to be taken into consideration that comics were already on a down turn in sales in 1975, was culminated in 1995. Atlas/Seaboard also had an erratic publishing schedule that tended to leave fans giving up on there titles, a schedule Image comics would ape in every way when they started up in the 90s. Logistic problems is no small thing, but when the publisher and his editor have radically different intentions, you figure it's not going to end well -and it didn't.

BUGFUCK VS. THE SINCEREST FORM OF FLATTERY

You can separate Atlas/Seaboard into two distinct periods the time while Jeff Rovin was still at the company, and then afterward when all the reins were turned over to Larry Lieber under the even more watchful eye of Martin Goodman. This goes hand in hand with the switch from Michael Fleisher writing a host of titles: (Brute, Morlock 2001, Grim Ghost, Ironjaw, Weird Suspense) to his being replaced by Gary Friedrich. This resulted in Atlas/Seaboard losing what made it special -if not commercial- to becoming a imitation of Marvel without the fan base acquired from years of publishing. Friedrich also took over the writing job on: Phoenix, Wulf the Barbarian, and the Cougar. Gary Friedrich isn't a bad writer, but Atlas wasn't Marvel and Goodman's folly was to go once again for the swipe, instead of the original. A comment Jim Kelly made on one of my past Zuda reviews sums up the Atlas reading experience: "...those comics were always just a little too close to the edge to have mainstream appeal, with themes or stories that tended to be just a little too edgey for their own good." That wasn't an accidental occurrence, it was the intent of purpose of  Jeff Rovin, the man who made Atlas, Atlas. "My own ambition from the start was to do characters that were a bit outré and experimental... somewhat more hardbitten and schizophrenic than the average super-hero." -which led to- "...The Code and I fought over literally every magazine Atlas published, starting with the very first, Ironjaw #1... and I didn't win a single dispute with the Code." [Jeff Rovin, in Jon B. Cooke interview] The comics code was always there to handicap any new innovations in story telling. Despite the code battles, I think Rovin's ambition was realized during his time there, the titles were definitely out there. Poor little blind girls eaten, teenage boy killed, cannibalism from spider people, vigilante killings, raping and pillageing, gooning it up with shakedowns, and that's just what the Atlas herores did! Martin Goodman's reaction to all this:
"Martin became more and more disgruntled as he read more and more of my comics. And what he decided, without having received a single sales report, was that they didn't look and read enough like Marvel Comics.
"'That's right,' I remember telling him with a mixture of disbelief and disappointment. 'Why should they look like Marvels?'
"'Because Marvels sell.'
"'Sure,' I replied, 'but that's because the characters have had 10 years to establish themselves, not to mention the newsstand clout Marvel has developed-'
"'Look,' he snapped, 'I don't want to argue about this. Just do it.' To which Martin established a hefty warchest and told Larry and me to go out and hire away as many Marvel people as we could. Larry seemed disappointed, but I was frankly appalled...."    [Jeff Rovin, in Jon B. Cooke interview]
In Januray 1975 Jeff Rovin quit, and the great push to be more like Marvel was begun by Larry Lieber taking over as editor, and Friedrich taking over for Fleisher.
"Larry called me up and said, 'Help.' Well, I flew up to New York and Chip and Martin took me out and wined me and dined me and offered me a bunch of money to save the comics enterprise. I didn't succeed at it but I made a hell of a lot of money at it for a year or so. I just freelanced. I wrote all their titles. I just said, 'Larry, until you find some other writers, I'll write them all,' and I did. We weren't real rich in excellent artists, which probably caused the failure as much as anything, though we kind of got it turned around and put out a line of books that wasn't too bad." [Grary Friedrich, to Comic Book Artist]
Those last few lines sent my bull shit detector into radioactive. Atlas had plenty of excellent artists and writers they just weren't Marvel enough. What Friedrich didn't realize is there was nothing to turn around, unless you mean going from a unique comics line that didn't sell, transforming to a imitation of Marvel -that didn't sell. The abrupt about face in tone and direction at Atlas has came to be known as The Third Issue Switch. Lieber/Friedrich's changes weren't all horrible, in one or two cases it actually added a nice new direction for the title, but for most books it was a One Flew style creative lobotomy.

For more on the titles and personalities in Atlas and the mark they left on comics, be sure to check out the blog for part 2.
Posted by RKB at 5:17 AM