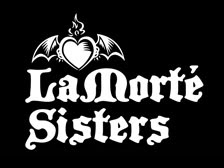 The Dead Sisters is a instant Zuda winner from Tony Trov, John Zito and Christine Larsen. It got a favorite from me, here is the synopsis:"While on a family trip, Maddie and her parents were savagely attacked by a crazed man. Though here [her] parents were not so lucky, Maddie survived due to the intervention of a silent savior who slew her assailant. Dazed and confused, Maddie finds herself on a bus to the LaMorte Home for Lost Girls is a special place that helps wayward young ladies deal with their peculiar condition. Under the watchful eye of these LaMorte Sisters, Maddie will discover the mysteries that lie beneath her imposed, new home."


Do the girls at vampire school have to wear those uniform skirts?

The is not a lot of dialogue, but the pacing over the 8 screens is very suspenseful. Having a school that trains young vampire waifs about their powers is an idea with a lot of possibility. The first thing that really impresses you is the art in this comic. Just the right mix of spooky and cartoony to tell the story well. Screen 1 is a full screen shot of Maddie holding her mothers hand, with some cool 'gasp' lettering effects. On the next screen we see a figure in the distance (her dad) being mauled by a vampire creature both framed by the moon. It's one panel cut into 2 to slow down a readers eye, and bring home the fact Maddie is holding her mothers hand watching her father die. In comics with little dialogue I'm always interested in the script, how much was in the writers descriptions, how much was the artist's initiative. Panel 3 shows the vampires in laMorte Sisters fall into the shark-mouth school of vampire characters. The panel ends with Mr. Scary headed towards defenseless Maddie and mama corpse. The layout of all these screens is extraordinary. Screen 3 shows you the dad face of Maddie's dad as the vampire creature gets closer to Maddie and her mother. It's a classic scene victim frozen in terror, big bad monster getting closer, and a reader's fear for its prey. For the most part this story is 'Zuda paced' just right to build suspense over the characters fate's. Screen 4 has a nice 1st panel with the vampires big red eyes framed by the girls gasping mouth. It wraps her up and starts drinking her blood, as her eyes roll back into her head. With art this good you don't need to cramp up the panels with unnecessary wordage, and to their credit the writers don't.

Screen 5 has a extreme close-up of of Maddie's eyes rolling back in her head. Then we see a Joe Kubert style insert panel of a flaming arrow, I didn't think accomplished much beside the homage. I was very impressed with the coloring for this sequence. The way the flaming arrows being stuck in the vampire cast their light on the various characters. Readers also see a nasty looking hole in Maddie's neck. The vampire drops Maddie to turn (flaming arrows still stuck inside him) and face his opponent, who we still can't see yet. In screen 6 the vampire attacks and the unknown figure throws little blades into its stomach. The action scene here looks more than a little off. The panel shapes, and depictions of the characters don't flow well from one panel to the next. Panel 4 was actually done very well, it didn't make the vampire look like a blood drenched, bowlegged scarecrow from The Wizard of Oz. In the foreground we see the unknown stranger start to draw their sword, with the vampire in the background looking ready to charge. Screen 7 we see the unknown stranger standing with it's sword out, and the vampire has burst into flames. The figure drops its sword to look at the bodies in the snow, vampire ashes trailing away, and (probably) her breath still visible. I wouldn't have minded seeing an actual sword swing, but this was still executed fairly well. Screen 8 is The figure checks the pulse on the girl Maddie, then carries her off on her back. Maddie asks if she's going to die and readers get the kicker dialogue the story ends on: "No child... ...you're already dead." It's snowing by now and the last panel is a silhouette of the two figures moving away from the reader, tracks plainly visible in the snow. The way this comic uses the weather to help set the mood of the story is admirable. It's not like a movie where it's a special effect, all it takes is artistic skills on par with what is displayed in this comic. I'm looking forward to new twists and turns from the writers, and hope they will be spared too many knee-jerk comparisons to either Buffy, or 30 Days of Night.
Posted by RKB at 3:51 PM