Zuda review ShockPopTerror!/ If you like Rob Zombie and Ron Embleton you'll love this! 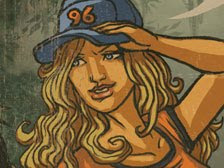 ShockPopTerror! is another October Zuda comic done by Jean-Michel Ringuet. Here is the synopsis: It’s 1974 and the Bane half-sisters have come to the swamps of Hooper County to find their loot stolen from them. Psycho-killers, monsters and mutants are waiting for them, and an upset gang of cannibal bikers is hot on their heels, but the victims are not the ones you think!

HorrorActionMystery!
The first thing I notice in reading this comic is how much the art reminded me of Ron Embleton. Ron isn't actually a influence on Jean-Michel Ringuet, but other artists of that time and style are. The next thing I noticed is the distressed effects added to the pages. It is a good framing device that's brings home the idea of everything is decaying, rotting to it's core. Screen 1 sets everything up with 1974, the Deep South as a caption, and a run down house in the middle of a swamp. We see some disturbing images to set the mood, then a evil looking character says to his evil looking mother he smells something, she says it's trouble. Readers then meet the Bane sisters Nemesis (blond) and Pandora ( brunette) on screen 2 who your lead to believe are going to do some shit kicking. Screen 3 has the sisters driving up to a confrontation with some local convicts at a gas station. What's more impressive than setting up a fight, is the backgrounds on display. You expect Swamp Thing could pop out any minute, and it just looks like the air could choke you to death from the humidity. Of course the gas station has the 'LIVE BAIT' sign up front and center. I happen to live a 5 minute drive from a similar gas station with a similar sign so it's true to life as far as that goes. Screen 4 had a really impressive panel layout a long shot, along with some close up panels. I enjoyed the dialogue, easy to read letters are always a plus too. I like the occasional Zuda story structure convention of halfway into the comic is set-up, and the rest is getting down to business. No modern day grindhouse/southern gothic/splat-punk story would be complete without a nod to the 'pretty mouth' line. Here it's "Well girl that's a naughty mouth on you and I love me a naughty mouth."Click to next screen for some ass kicking action scenes.

Everything goes better with chainsaws including a few thoughts on the grindhouse genre
Screen 5 delivers as that anticipated action scene with plenty of face bashing and ball busting. Screen 6 has the attack of a swamp mutant, including a caption tipping you off to what it is. Screen 7 has that swamp mutant (amazing monster design by the way) meeting his fate. In a well layered out panel Nemesis cuts his leg off with a chainsaw. Ringuet in the layout of scenes like this establishes a nice consistency of having a central image be the bridge between the build to action, and the explosion of that ultra-violent graphic violence I love so much. The panel only stood out to me because of how well done the rest of the comic is. What impresses me about this comic above all else are the fluid action scenes where art and dialogue work together to make scenes you remember. I've read online comics where all the figures looked stiff and the sequential art of 'ultimate showdowns' came across as paper dolls playing slap and tickle. It's nice to be able to enjoy a action filled comic that delivers on the thrills with room to grow should it win. This submission ends with blood and gasoline both guzzling up in a nice bit of symmetry as a result of the fight with the mutant. The two sisters find out the location of the man they were looking for, and speed off to find him after sparking a huge explosion. The only thing that was a miss for me with this comic is panel 3 on screen 8. It would have had more impact had the goon being questioned looked into the sisters eyes. I liked the "Say hi to Satan for us! Let's go to church, we got a date!" words the comic ended on, and the promise of "Next: quagmire maniacs!!!" Every story is a genre of some type story. You can break it down into sub-sub-genre's or paint with a broad brush and just say horror. No genre necessary has to limit where you can go in a story including grindhouse/exploitative type stories. Neil Gaiman once said comic books thought they were Rock and Roll, and they were really Jazz. Meaning to me: comic fans are already a sub-set of a general audience, not in the masses majority. Their is a difference between trying to sell a film across America, and giving Zuda a try where zombie stories (as a example) of all kinds do so well. I love genre stories that give me 'the same, but different'. Meaning their are enough familiar/expected elements in it the qualify for a genre tag, but it has that something extra hook to it that makes the story stand apart from the rest. With ShockPopTerror! it's having actions done so well (with smart dialogue) you want to pump your fist and cheer the Bane sisters on. The best genre stories pull one more trick and are impressive to readers/viewers who ordinary wouldn't give the story a try. For an example: I hate zombie stories as a general rule. Their are exceptions like Zombieland in film, and Gone Zombie as a example in online comics. Stories that got their base, then went out after the rest of the audience. ShockPopTerror! is my go-to genre so Ringuet has the base, now he just has to go out their and spread the word.
Posted by RKB at 11:26 AM