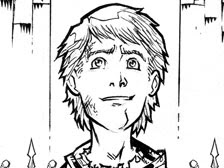 Pluck is another October Zuda comic done by Gabe White, Matt White, and John Amor. It got a favorite from me, here is the synopsis: Pluck is just a poor boy in a poor kingdom. Born low, sinking lower. Sure, he is always planning something big, but he is never quite able to rise above his station. Until now, that is. Seems he has stumbled across a magical amulet. Apparently, a very important amulet. Spoken of in one of those Ancient Prophecies. All he has to do is bring it back to the king and he'll officially become the Chosen One. Just like that. Savior of the Kingdom, adored by the royals, worshipped by the masses, all that good stuff he desires. Nothing left but a long easy life, getting filthy fat, writing bad poetry, and keeping the courtesans busy. Of course, there are those pesky rumors, whispers about some looming threat. Some primal evil poised to ravage the land, eat the children, skin the men raw and hang their twitching skins from the treetops. Standard stuff, really, nothing but talk. And, besides, Pluck's got more important things on his mind; Courtesans, poetry, waistline. In that order. After all, a boy's got to prioritize.

A black and white comic that actually pulls it off
The problem with most black and white comics on Zuda is they look unfinished. Not that the creators didn't want to have a go without colors, they just didn't bother to put them in. Pluck is the first Zuda entry in a while to avoid this, and the art/story is good too. Too thick a line, too much white, and not enough textural details are the culprits of the coloring book look. In Pluck you get some nice shading done on some dingy walls and dingy clothes right on screen 1 on. This reinforces the absence of color was a choice and not a circumstance. John Amor's art style/inks remind me of some old children's book artist who's name escapes me because back then I only looked at the pictures. Their could also be a bit of manga going on there in the art too. The story starts with Pluck and his female friend Dreda (as narrator) stealing some Gidding dung for the profit in it. She's also talking about taking a bath, and prettying herself up to seduce any Duke (with money, looks didn't matter) in sight. The comic opens with a establishing shot then we move in to see the characters, with well written dialogue/minimum text to accompany it. Screen 2 actually builds on the characterization in screen 1, and adds some more layers to the characters. 2 screens in and I already give a damn what happens to them, is a win. Dreda is telling readers Pluck always has a scheme to get ahead, that usually doesn't work out. The latest scheme is selling dung to rat people who make bricks out of it, then buy 2 chickens... She stops paying attention to him because she sees something shiny in the distance -a heroic knight in armor. The story has your expected fantasy start for two screens, then the whole idea of crusading knights gets turned on it's head. Dreda describes the knight as the 5th most beautiful she has ever seen, then readers see images of the previous 4 who had been ordered hanged by the king. The reason given: "as a rule the king don't care for handsome men" maybe he had a bad experience with a Lancelot type in the past, but it was a very interesting bit to be thrown in. The screen ends with the knight getting knocked off his horse by some troll looking creatures called jack-bats. This story also does a fine job of hitting it's stride for the Zuda pace of 8 screens to work with. The screens all end on a note that makes you want to click on to see what happens next. The various panel layouts are impressive using different views to keep up readers interest. Screen 4 starts and ends with a close-up panel of the Knight fighting the monsters. The second panel shows the knight in silhouette fighting them, pulling back to show Pluck and Dreda watching. The knight talks about previous battles won, and as a jack-bat claws his face claims to be the chosen one.

Hell's yes to more castles!
The good placement of word balloons with a easy to read font worked in it's favor. Knowing when to skip the text and let the pictures speak for themselves was just as important. Screen 5 has a 4 panel combat sequence that ends with the Knight on the ground in a pool of blood saying: "No... This is wrong...". Panel 3 has a nice close-up on spittle clinging to the Knight's teeth, every time I see something like that it reminds me of the old EC artists work. Pluck and Dreda finally go up to the knight who reveals a amulet and claims he is the hero of the prophecy... In 2 man on the ground P.O.V. shots first Pluck looks concerned, then after the knight dies, he smiles. This leads into Pluck's new personal advancement scheme to go to the kings court and claim he's the hero with the amulet for the rewards. Pluck and Dreda finally make it to a check point with a knight who tells them: "You stink like like my drawers, son. Best talk fast." At knife point, I'm thinking one of those likes was a typo. Pluck spins a yarn and the king's guard go to check it out with the King. Screen 8 ends with Dreda concerned about all the waiting they were doing, only to end with a panel of Pluck looking triumphant up at the king -who we actually don't see since it's a king's P.O.V. shot. It's a good ending to the story, almost a done-in-one with all the characterization done in only 8 screens. If this comic goes on to win, I will be following it. It made Black and white on Zuda work, even if it doesn't win that's a stunning accomplishment.
Posted by RKB at 11:54 PM