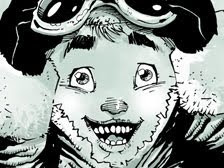 A Polar Nightmare is another October Zuda comic done by Zuda vet Amancay Nicolas Nahuelpan Bustamante. It got a favorite from me here is the synopsis: Once upon a time, there was a little boy named Willy, who, every year would write to Santa and ask him for that much-desired present he wanted for Christmas. But something went wrong last December 25th. He sent his letter as usual, but he didn't get his present. So in desperation, he decided to go and ask Santa in person why he didn't deliver his gift.
Jimmy and his best friend Willy, set out on a journey of their lives, venturing into the heart of the North Pole to visit Santa Claus! Things don’t go as planned, and after visiting Santa's house; they wished they never left their home. Now, surrounded by trouble, they will have to find out how to survive the Nightmares of the North Pole!


Santa's done horror before, but this time he has sex-pot elves for back up!

Amancy is drawing it, so of course it looks amazing. The letters are legible, and the colors add a very nice element to the story. It has a slower start than previous comics Amancy has done, but I really enjoyed the actually unexpected cliff hanger pay off at the end. If your going to draw a landscape, you need to be able to draw a landscape. Amancy does an excellent job of showing off the north pole, snow covered mountains, and tracking through a winter wasteland. The text boxes are well written, even though they rhyme. Screen 2 sees our introductions to Willy and Jimmy as the classic optimistic/pessimistic duo. The yellow text boxes rhyme the whole way through, and it does convoy the sick childrens book aspect of it. By screen 4 they're knocking on the front door, with some impressive art done on Santa's hideaway. The color scheme really brings across the desolation beyond Santa's shack, all you got is snow. I wouldn't have minded seeing more panels per screen, but I understand building up the anticipation.It could be a quick read if you don't take the time to appreciate the art. The dialogue for the two little kids is spot on. throughout the comic  the dialogue doesn't cramp the art, and does a good job of getting the story across.

Screen 5 we get elf babes that could be playmates who also speak in rhyme. This is the first real hint that things are not what they seem, or you would expect. It's also one of my favorite screens with a nice Elf P.O.V. looking down at Willy. His wide-eyed Santa hopes is proof he's too young to appreciate what he sees before him. Screen 6 is another one of my favorite screens where we get a full screen shot of a evil looking Santa. He is hooked into a number of machines, in some interesting places, and explains: "Welcome to my humble house you spoiled brats. Sorry for my appearance... but my kidneys are driving me nuts." It could be one, or both of the elf babes gave him something Ajax couldn't take off, and Penicillin can't cure. Bad Santa does give the standard Ho Ho Ho, but it has more of a Silent Night/Deadly Night feel considering the circumstances. Screen 7 is when things start getting even creepier, which is cool as hell.  The art is intense as the panels go from two scared kids to a close up of evil Santa with what looks like cockroaches coming out of his eyes. The lettering job was also very well done with a gray balloon signifying whispers. The lettering job on bad Santa's closing rhyme was also very good.  It ends with a black screen extreme close up on Bad Santa's eyes with the bugs coming out of it. He also delivers a threat in rhyme that's some scary shit for Santa to say. The ending makes you concerned for what's going to happen to those kids, and wondering what the hell went wrong at the North Pole. This comic is a original twist on turning Christmas into a nightmare.
Posted by RKB at 11:05 PM