Where Evil's Dare/ With all these monsters what's missing? 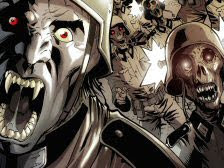 Where Evil's Dare is a October Zuda competitor done by Tony Lee and Stefano Martino. Here is the synopsis: The Dirty Dozen meets Hammer Horror as, during World War II a fearsome group of Allied soldiers fight Hitler’s most monstrous regiment – 666 Platoon – an army consisting of Radio-Controlled Zombies, Werewolves and a unit of Vampires led by Dracule himself! Hitler wants the Spear Of Ra, an occult item of great power and has sent 666 Platoon to retrieve it, but only the Special Occult Squadron, led by Richard Harker, the grandson of Jonathan and Mina Harker can stop them! But to do so they must race across the blood-splattered fields of Romania with only a bitter, injured resistance fighter to assist them while fighting a gauntlet of Frankenstein’s Monster Nazis, Hitler Youth Werewolf ‘dog squads’, Gestapo Vampires – and their own fallen dead! Will their 'sniffer', Renfield, the untrustworthy grandson of Dracule’s servant turn on them? Will Captain Harker finish the job his grandfather started? But more importantly - can they save the world one more time before dawn rises – or will Dracule and Hitler finally win?

The dangers of too many good throw away lines--
--are exposed right off in Dracule's opening monologue. At the start of this story Dracule is going on about Romanian blood being thin and weak, with Aryan blood being stronger and thicker. When the most interesting part of a comic (to me) happens in the first few panels that sets the bar pretty high for the screens to come. In Romania Dracule/Vlad Tepes to this day is seen as a national hero, he's even been honored with commemorative stamps. The interesting opening lines really had me wondering what's going on with Vlad? It can lead to all kinds of possibilities everything from: Dracule got disgusted with his own people's lack of power in the then modern world, Hitler's almost supernatural charm is supernatural and Dracule's under a spell, or the historic Vlad Tepes and the vampire Dracule aren't the same person at all! I would have liked to see Dracule's views explored more instead of so much time spent on Harker's progeny. In a genre story I'm looking for the same but different. A story that fulfills genre expectations, but has something extra to 'hook' readers. Dracule, Von Frankenstein, the 666 platoon filled with German zombies, werewolves, and vampires isn't what makes the story unique/stand out -I've read the 80's version Creature Commandos. Dracule's feelings towards his own people/embracing the Aryan idea is something different, his remarks to Von Frankenstein about "playing God" had what seemed like a contempt you could hear and this is a comic book! Does a little trace of that old 'defender of the faith' mentality still linger? This being further explored could make for a unique story. Screen 2 is a full screen shot of Von Frankenstein commanding his hordes to attack a town containing the Book of Antrioch which is what they're fighting over. The radio controlled zombies with the energy waves coming off of Von Frankenstein along with werewolves and vampires did make for a impressive full screen shot. Screen 3 we see the heroic/doomed forces being besieged by the various monsters. We also got a introduction to a fighter/future love interest Helena who dispatches a werewolf with a silver bullet. Screen 4 we get a run down on the results of the monster raid (3 survivors), and we met the special forces of good lead by Captain Harker, the grandson of Jonathan Harker. It was the expected roll call team shot, but it did a good job of introducing the characters.

Could Dracule wear a Iron Cross?
The staff of the sun god Ra is another one of those interesting plot points that could really go somewhere, and props for not invoking the Spear of Destiny. The Book of Antrioch is what the bad guys and good guys need to activate the Ra staff, the staff just happens to be hanging in Dracule's old castle. That is a good set-up worthy of the war film homage in the title of this comic. As described the Ra staff can blast a hole in a building with it's power, which isn't that impressive considering a tank shell can do the same thing. However, it's a good point to remember just because the characters think thats what it does, doesn't mean it couldn't have more 'power' befitting its supernatural nature. It's a good mystery to look forward to, but it seemed like a lot of dialogue to get the point across. I don't mind wordiness, but the comic would have seemed much more cramped from the balloons if it wasn't for the generally fine placement of them. Screen 6 readers find out Renfield has a grandson too, who Harker thinks is just as balmy, but Renfield is ordered along for the trip anyway. In the dialogue it is explained Renfield is a 'sniffer' who like the rest of his family can sense Dracule's presence. Turns out Renfield the III's origin is a nod to Freddy Kruger. His grandfather forced himself on a woman in a madhouse and this adds to his tortured legacy. Readers also find out Lord Godalming is the one who put this "Special occult squadron" together as he compliments Harker for being like his father and grandfather before him. This brings up one of the most interesting aspects about this comic not to have much light shined on -the lost generation. We know what the grandfathers did, we're reading about the grandson's exploits, but what did the parents of these characters get up to? I hope should the comics win we get flashbacks to Renfield the II's activities, and Quincy Harker. In screen 7 we see the squad preparing to parachute into combat, and a well written panel of Harker reminding them his grandfather slit Dracule's throat with the blade he holds in his hand, and that still didn't finish him. Renfield the III also defends himself saying he's not proud of his family history. The letter balloons went a little overboard in the first panel of this screen, reminding me of the infamous panel from X-Men #1 where you can't even see Magneto's face for the verbiage. The color choice on the other hand was excellent, I loved the red cast on characters being a portend to all the bloody violence to come. Harker says he wants to save the world and then come home for "tea and medals" which is a nice funny line. The comic ends in a full screen shot with Harker speaking some faux-Victorian vowing to kill Dracule. Their are a lot of interesting bits, and possible directions this comic could go. Instead most of the focus was on Harker, who was a undistinguished less interesting 'classic hero' type.Their wasn't enough panel time giving to the really different/unexpected elements in the 8 screens to get a favorite from me.
Posted by RKB at 10:11 PM