Zuda review Antique Books/ The title should have been in French, 'Livres anciens' 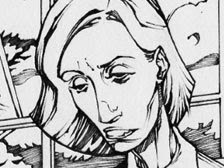 Antique Books is another August Zuda comic, the creator is Scott Boyce. Here is the synopsis: Nola's Antique Books was located at the dark end of Old Vic Avenue, where the trees were twisted and blocked out most of the sun, and warded off most of the foot traffic. It was the kind of shop you had to wonder about. How did it stay open? What kind of books could keep it open? And what strange people lived upstairs? Mirabel knew the answers to all those questions. She had worked her way through college there. She spent years behind that old oak counter and the place could still make the hair on the back of her neck stand up. But lately, the strange owners upstairs had gotten stranger. The old withering mother, seemingly older than anyone should ever grow to be, seemed to be slipping away. In her half-French, half-English ranting, she seemed to want to say something - a warning that never made sense. Mirabel just pushed her uneasiness down. She was at her own wit's end trying to figure out the answer to her own question: what now? College was finished, but no career yet to speak of. What now? Could the same life, job, partner be the right thing? She let all these thoughts overwhelm in her head, when the old lady finally lets go and brings her warning to life. A long buried, ravenous, vicious force was released into the world in the bedroom above Mirabels' head. Things only get worse when the security doors meant to protect the books seal her in.

It's not a foreign language comic, but I liked that element of it
If this comic would have been in color (even expressionist color), it would have got a fav from me. It doesn't look like a black and white comic. It looks like it's waiting on a colorist to step in, and make everything come together. I got a 'white out' effect from all the blank space. Interesting screen layouts still ended up having art that didn't stand out from the oppressive white background. Having a story that started and stopped didn't help this competitor either. Just when you start wondering what's going to happen next, you find out the next screen is a boring new tangent. Antique Books starts off well enough with a introduction to the lead character -Mirabel. Then on screen 3 something really interesting does happen, a well done introduction to a crazy old woman with a Cassandra complex. I liked the ranting in French and English it had that appeal of a foreign language comic. Wanting to find out what was really said pulled me into the story, and finding out later on in the screens was a good reveal. On screen 2 I enjoyed the repeated sound of "La Luna" in the panel. Two screens in and you definitely have that something creepy is going on vibe established. I don't know what the hell happened with screen 3? For some reason Boyce chose the least appealing layout possible, maybe his favorite color is white? Getting teeny, tiny, P.O.V. shots isn't the way to draw readers into the story. Stuffed Owls are a let down in creepiness compared to a French/English 'it's coming' style rant. The story stopped here for a ascetically unpleasing main character interlude. It reestablished the point that had already been made on screen 2, only doing a poorer job of it. Unless Hedwig is in hiding amongst them, Boyce needs to forget about those damn owls. After the owl reference, screen 4 again picks up the story. It actually does reveal more of Mirabel's character with a few good text box thought balloons. It goes over her typical day, and ends with a nice panel of her looking completely dejected. With Screen 5 I really enjoyed the half translation, half stream of consciousness thoughts of Mirabel. Readers also see some pretty effective facial expressions to help convey her feelings.

The art has a European flavour to it
Scott Boyce's art work reminds me of Benoit Springer and Enki Bilal. It's really hampered by the lack of color and poor layouts. Sometimes all those little panels work, sometimes they don't, -screen 6 they don't. It sets up Mirabel's problematic love life with too much white backgrounds everywhere. Either cut down on the dialogue, or cut the number of panels to make it work for readers. Too much negative space killed the effect, but seeing Mirabel reading the tea leaves was a nice nod to the other-worldly. Everything good in this comic is muted without color. The tea looks the same as all that blank space to the left of it. A slow start that seems dragged out over 8 screens will also lose reader interest. We see a monster at the end of this comic, and no it's not the reader. The creature is coming down the stairs, and Mirabel never bothers to turn around, thinking it's the old woman. Due to the lack of color it's hard to tell where the stairs stop, and the monsters body begins. It has a lot of teeth, and what looks like a elongated bicycle seat on its head. For some reason the creator chose this as the last scene cliffhanger. Why not go for more dramatic punch by having Mirabel attacked, or seeing the monster? It could have been a great chance to stop building up to something, and finally get on with the story. No color. Antique Books didn't take advantage of it's good points, and didn't make good use of the 8 screens allowed. I hope to see Scott Boyce back in Zuda, with a entry that's a better fit.
Posted by RKB at 1:15 AM