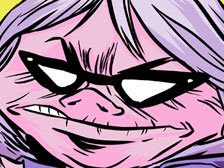 Octane Jungle is another August Zuda competitor, done by Morgan Luthi & Mike L. Kinshella. Here is the synopsis: In an all-too-plausible dystopian future, the all-seeing, all-knowing, all-killing corporate monolith - The Motherbrain - has virtually dismantled the free market with it's monopolistic vice grip on all viable goods and services. The incorrigible crew of Doc's Pie Hole put their necks on the line night after night in the pursuit of preserving legitimate, free enterprise. A surly band of outlaws, miscreants and reprobates they may be, but Doc's crew gets the job done every time. They take pride in keeping the contraband economy rolling and remain unflappable in the face of gang warfare, police brutality and the countless other imperilments lurking in the city's seedy underbelly. Mind-blowing danger, reckless speed and seemingly insurmountable jeopardy are all in a days work for these, our tenacious protagonists. But the sudden emergence of an enigmatic villain is about to propel the denizens of the Pie Hole into a maelstrom of violence and duplicity, which even they might not be able to shoot their way out of. Blood will be shed! Cars will be crashed! Sh*t will get blown up! Limbs will be liberated from bodies! Secrets will be revealed! It's all part for the course in the Octane Jungle!

Too much drive-by weirdness that never takes its foot off the gas
Their was too much of everything in this comic for me to really enjoy it. From panel to panel the creators didn't stop throwing things out to readers, let along screen to screen. Even the quieter moments (two guys talking about a pizza), weren't that quiet. It was really to fill in the blanks about the dystopian nanny state Octane Jungle is set in. I don't care for 'decompressed' story telling where nothing really happens. I don't care for 'hyper-speed' story telling that tries to give me information overload either. It seemed just as I got interested in a character/situation Octane Jungle would make a hard left and be off in another direction, and location. Imagine the creators as oblivious tour guides cracking the whip to move the group along. I know some readers are going to enjoy the thrill-ride pace, but it wasn't for me. The day-glow colors were at first impressive, but they weren't conductive to savoring the story. The expressionist coloring eventually turned the screens into a vaguely undefined multi-multi-paneled blob. It looks like a rainbow threw-up on the finished art! I can only take some much of that. Considering the pace of the story and the actions/words, understated colors would have been a nice counter point balance. With the lettering some of Jackson's -the lead- thought balloons, are hard to distinguish from speech balloons. One thing I really enjoyed about this comic was Baron (Jackson's driver) who is very reminiscent of a gremlin. Another thing is the sound effects. They do fit the story, and they come early and often. It seems some creators just want to skip over 'sfx:', and not use a cool tool comics have. That doesn't happen here, and the lettering on them is great. The art is fine, but too cramped by all the bite-size panels. The story started out very interesting, but then went down hill because of the pace.

Considering they're all pizza delivery guys, will their be a classic porn homage in the future?
This comic ended up being more like Wacky Races meets Death Race 2000, than the gritter story I thought it was going to be. The reveal of the 'pizza guy' twist on screen 4, led to my declining enjoyment of the comic. The story goes back to the characters home base for a Taxi tribute sequence. We see a foul mouth character named Granny who looks like a pig in a domino mask. Numerous parts of her dialogue are redacted thanks to Zuda standards and practices. It's a good gag, but done a little too much to be that funny. You do something once not funny. You do something twice, mild chuckle. Three times you get hysterical laughter. You do something 8,9,10 times your crossing into 'why did the chicken cross the road' country. It ended up being more of a sit-com comic than the genre tags the creators hit it with. Not my go-to genre, but in a technical sense very professionally done. The problem for me was 8 screens over stuffed with too many panels and balloons. The art and dialogue were both cramped by the page layouts after the initial car chase. Then you factor in the expressionist 'mood changing by the panel' coloring on every page... Insane story, plus insane colors, is just too crazy for me.
Posted by RKB at 7:25 PM