Zuda review If you see the hills/ Anyone else disapointed they didn't jump? 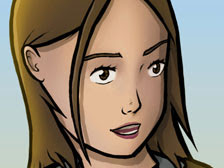 If you see the hills is another Zuda contestant, its writer/artist is Sal Field. Two angsty kids hang out on a roof, but not the ending I had hoped for. Here is the synopsis: The sound of the city is a distant noise high up on the roofs, where sixteen-year-old Katja spends her afternoons in this coming-of-age teen drama. Sure, "these are the times that you will miss," but being a teenager can be a struggle as you deal with growing up and all the changes that come with it. It certainly is for Katja, who like most teenagers, hates going to school. And why wouldn't she? Most of her teachers are drunk deadbeats, and once she graduates, the chances of finding a job look slim in her hometown (or anywhere else, for that matter). Spending her spare time at home, usually fighting with her unemployed mother, just isn't very tempting. So with no other place to go, Katja and her friends Sasha, Natalya and Luka hang out on the roofs of the city; the only place where there aren't any adults around, and they’re allowed to find out who they are and what they want to be when they grow up. With only the blue sky above them, and the depressing gray city below them, Katja and her friends feel free and forget their dreary lives for a while. Here in the sun they spend almost all their free time, watching cloud shapes, pondering about life, falling in love and daydreaming about changing the world...
If you can't draw nice roofs, don't set your story on top of a building
I stopped being interesting in 'coming of age' stories, when I came of age. If a creators entire 8 screen submission is going to be on a roof top, you need to kick ass 'Gerhard styl'e when it comes to backgrounds. The city below them doesn't look depressingly gray, it actually has no personality at all. In this comic the detail was nil, their should be no excuses for having bland architecture in this story. If the city is so run down, why are all the shingles in such good repair? The lead characters are just as bland as the scenery around them. Character expressions aren't understated so much as non-existent. It's 8 screens of minimalist conversation culminating in a 'on the fritz' cell phone joke. Katja mentions someone crazy who tried to kill her, but all the two characters do is talk about it. A flashback to this might have made me interested. Then their is some Dawson's Creek style dialogue about copying math homework. Besides buildings with no character you also see character's faces with no personality. The friends both have 'cow's eyes' with no apparent awareness of anything including the dialogue their speaking. When editing out the non-existential parts of this story Sal Field cut too close to the bone. I didn't even see the clouds it talked about in the synopsis. Katja talks about her 'messed up family, how much school sucks, all their teachers being stupid jerks' -why couldn't we see any of that in this story? The main characters keeps referring to how bad the town is, but it doesn't look that bad to me as a viewer. It's a comic, the creator doesn't need to: tell, tell, tell, events can be shown, shown, shown -in the art. I'm not just going to take Katja's word for it the town is as bad as she says, it needs to be shown in the art. Maybe the creator is being ironic and the town isn't as bad as the teens think... In either case 8 screens on the roof is not selling me on this title.

No, it's not that funny
For the most part this month in Zuda you either have too much of everything, or not enough of something. Going through the 8 screens you keep expecting 'something' to happen, and it never really does. If you see the hills can't really be labeled 'decompression' because the story never seems to really begin. Katja and Sasha must have got stoned off-panel to explain the lack of emoting they display. The last panel on screen 8 switches to a long shot so readers don't even see them laughing, just a unimpressive HAHA sound effect. This comic is not my go-to genre at all, it doesn't do anything well enough to make me care about these characters. If more of what viewers read about in the synopsis was in the comic, it would have been a better read. If either character would have jumped off the roof, I would have cheered! The only thing that happened in this comic was a insipid conversation. Their should have at least been more angst in the friends interaction and less boring to read apathy. Why couldn't Sasha have at least made a pass at Katja? Sometimes you just don't get the appeal, that's what happened to me with If you see the hills.
Posted by RKB at 3:18 AM