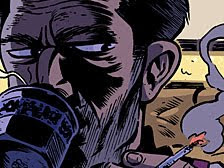 Bow & Arrow Detective Agency is another Zuda contestant done by George Gousis & Antonis Vavagiannis. It's art that didn't match up well with a series of horrible jokes. Here is the synopsis: MURDER! EXCITEMENT! SUSPENCE! THIS IS THE STORY OF BOW & ARROW! The story follows two detectives in a murder investigation, which leads to a huge web of international conspiracy to cover up one of religion's societies and 90's pop music secret. The noir setting mixed with surreal humor makes this a very unique tale that examines all the clichés of crime fiction. It all begins on a rainy night. Right above a 50s themed strip club, a Jackie-O look alike discovers her roommate is dead. Being turned down by the police, she decides to call the local detective agency. There she meets with Philippe Arrow, the weathered old private eye forgotten by time. And Maximilian Bow, his loyal but eccentric sidekick. The two detectives, intrigued by the heinousness crime and the police's reluctance to deal with it, begin the investigation. It will lead them deeper and deeper in a world of conspiracies, murder and utter idiocy! Do you dare to follow them?

Why couldn't she have been a Marilyn Monroe look-a-like?
Doing a comic book that's invoking Woody Allen's style across mediums isn't going to win my support. This comic is unreadable in small screen, and the font doesn't look particularly nice in full view. Aside from Jackie-Oh not looking much like a stripper, it's a well done opening to a murder mystery. The genre expectations of Noir detective stories were met in the initial pages. The screen layouts were well done, with good work from the artist in making each panel increase readers interest the story for a nice cumulative effect. Case #108 would have been fine if it wasn't for the two detectives readers met on screen 3. Bow is instantly annoying in looks and dialogue which made the poor font even more horrid to look at. Arrow dressing like he's in a time warp ,with the phone to prove it, made me wonder just what era this story is set in anyway? The character designs make the unfunny jokes their spewing even worse. You can have detailed art in a comedy, but the jokes have to be funny. Humor is subjective, like everything else, but every joke/gag in this comic missed me. It is joke, after joke, after joke, in this comic -it doesn't stop. Another big problem is you have a story starring a comedy duo, but no straight man to play off of. Arrow is too weird of a anachronism, and he has a touch of the Bugs Bunny about him. Bow's character design makes him stand out like a sore thumb in this comic, and I couldn't stand his various 'comic relief' lines. The coloring is very realistically proficient, but that's a problem with a comedy. The coloring (and screen layout) on screen 6 was very well done, the dead girl looked positively gruesome. It looked too much like a Noir true to its genre to be part of a comedy hybrid played for laughs with the 'death of 1o,000 paper cuts'. The duo's outfits and figures of speech really left me wondering just where in the hell where we? Everything but the two main characters says after the '60s. Arrow looks like a reporter stereotype from the '30s, and Bow makes Jesus Christ Superstar references. The reveal of the clues were handled well on screen 7, but then that gets wrecked by a sight gag on screen 8. The comic ends with Macarena lyrics being a key clue. I guess were somewhere in at least the '90s... It doesn't add up to being Absurdest humor, it's creator induced confusion. It's hard to laugh when you don't know what in the hell your reading.

Waiting for the big reveal that might not ever come
if it's same to assume readers might have a few big questions about your comic, it behooves you to if not answer them, then address them. The creators have mentioned how Arrow got together with Bow will be revealed in the future. It could be their is some big story arc/flashback that's going to lead into the reveal of that mystery. Problem is Jackie-Oh never thought to question why Arrow is with the comic side kick Bow. The reasons didn't have to be spelled out in the 8 screen admission, just a acknowledgment by the creators readers would have these questions about the story. Just going with the flow isn't too grabbing to readers, the origin of their partnership could have bridges the gaps between art and dialogue. Bow and Arrow also tried too hard to be funny, instead of dialogue that aided the story readers got the set-up to the next joke. Even the classic 'who's on first' routine gets old after a while, and their are some really old saw slapstick in this comic. Once you reach a certain level of realism in art madcap zaniness isn't possible. In a comic the art and story have to blend together for a great read, and that didn't happen here. Based on its current rank people do seem to enjoy the type of humor here, but I never could connect enough to care what happens next.
Posted by RKB at 6:36 PM