Danish Muhammad cartoons banned in the U.S.A. again!/ Spreading the light and speaking the truth about Yale University Press 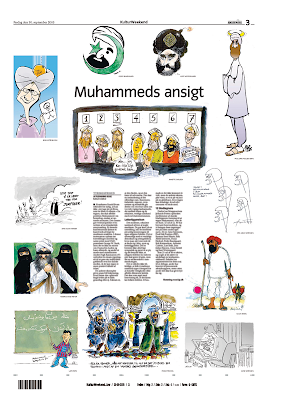 Yale University Press has published a new book about the Danish Muhammad cartoons, but banned its author Jytte Klausen from including the actual cartoons themselves. Writing a book about the Danish Muhammad cartoons without showing them, is like writing a persons autobiography without mentioning their name. Everything would be in the book except what the book is actually about. When published in Danish newspapers various self proclaimed Muslims took to the streets rioting and in the end at least 200 people were killed. According to John Donatich, Yale university Press director, 2 dozen experts who refuse to be identified were consulted. Their recommendation was to remove the Danish cartoons, and all images of Muhammad from the book. That's why Klausen's book: "The cartoons that shook the world" doesn't actually have any cartoons in it. Klausen: reluctantly accepted Yale University Press’s decision not to publish the cartoons. But she was disturbed by the withdrawal of the other representations of Muhammad. All of those images are widely available, Ms. Klausen said by telephone, adding that “Muslim friends, leaders and activists thought that the incident was misunderstood, so the cartoons needed to be reprinted so we could have a discussion about it.”
I understand the actions of a few doesn't represent the entirety of the Muslim word. If anyone makes excuses for the murders and riots, that would be something I wouldn't understand. No amount of explaining would enlighten me on that subject. It's not about the images being available it's about having the courage to stand in solidarity for freedom of speech, or not. Klausen went on that: the cartoon protests were not spontaneous but rather orchestrated demonstrations by extremists in Denmark and Egypt who were trying to influence elections there and by others hoping to destabilize governments in Pakistan, Lebanon, Libya and Nigeria. The cartoons, she maintained, were a pretext, a way to mobilize dissent in the Muslim world. 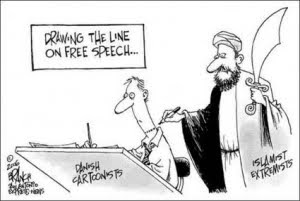 Mr. Donatich said that the images were still provoking unrest as recently as last year when the Danish police arrested three men suspected of trying to kill the artist who drew the cartoon depicting Muhammad’s turban as a bomb. He quoted one of the experts consulted by Yale — Ibrahim Gambari, special adviser to the secretary general of the United Nations and the former foreign minister of Nigeria — as concluding: “You can count on violence if any illustration of the prophet is published. It will cause riots, I predict, from Indonesia to Nigeria.”
If your tired of people mocking Christianity just cut someones head off, and less people will be saying bad things about Jesus. The same principle applies whatever your religion, or sect affiliation may be. Saying a cartoon published is inciting mayhem and murder, is the same as saying a woman wearing a short skirt is inviting rape. It's the 'you asked for it' defense blaming the victims of violence, instead off actually blaming the miserable Godforsaken sons of bitches responsible. That is as evil as any wrong thing in this world. 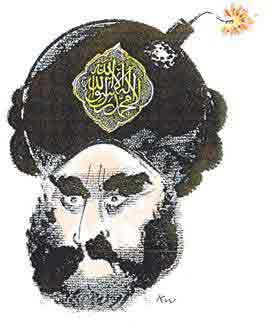 The condescending paternalism of Yale University Press and those who share it's beliefs seems to be murders can't help their actions from inflamed passions. Bullshit. As if without those cartoons being published their would be peace in all the current hell-holes of the world. Reza Aslan a scholar and author who wrote a book about the future of Islam removed his blurb from the back cover. These are his comments: “The controversy has died out now, anyone who wants to see them can see them,” he said of the cartoons, noting that he has written and lectured extensively about the incident and shown the cartoons without any negative reaction. He added that none of the violence occurred in the United States: “There were people who were annoyed, and what kind of publishing house doesn’t publish something that annoys some people?” “This is an academic book for an academic audience by an academic press,” he continued. “There is no chance of this book having a global audience, let alone causing a global outcry.” He added, “It’s not just academic cowardice, it is just silly and unnecessary.” 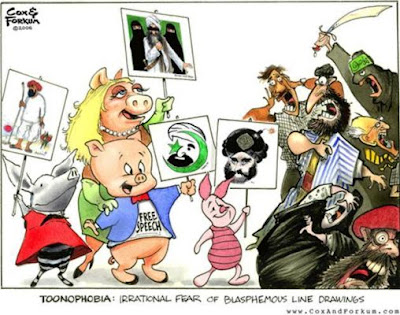 The reasoning of the censors reminds me of Frederick Wertham and his arguments in Seduction of the Innocent: If it wasn't for comics encouraging juvenile delinquency all American children would be little angels. Long before comics came on the scene you had 'kids' who would grow up to be the future convicts of America. Long before the Danish cartoons you had bloodshed in the streets with religion as an excuse. Voltaire didn't say it Beatrice Hill did, but the sentiment is: "I disapprove of what you say, but I will defend to the death your right to say it". Plenty of high minded progressive thinkers paid lip service to those ideas, until angry apostate mobs [These murders can't truly believe in their religion, and practice such a perversion of peace] started taking it literal. For myself I've never pretended to be that far up on the morality scale, I'm more of a enlightened self-interest kind of fellow. I can't support muzzling someone I disagree with, cause I know the same thing could happen to me. You. Anyone else. I'd rather tolerate those I didn't like than have myself, or others I agree with silenced. The slippery slope isn't a straw man fantastical creature, it's real. First the cartoons gone, then the columnists muted, and finally book burning is back in the U.S.A.

The cartoons are freely available on the Internet and can be accurately described in words, Mr. Donatich said, so reprinting them could be interpreted easily as gratuitous.He noted that he had been involved in publishing other controversial books — like “The King Never Smiles” by Paul M. Handley, a recent unauthorized biography of Thailand’s current monarch — and “I’ve never blinked.” But, he said, “when it came between that and blood on my hands, there was no question.” So once upon a time Donatich had some testicular fortitude, and after this book is published he plans on growing another pair again. I don't believe in blood libels. Unless your killing people yourself, gave the orders for it to be done, or cheer it on in your heart, their is no blood on your hands.
Yale University Press is worried publishing the pictures in a book would 'incite' even more mob violence, the defense for exclusion is their readily available on the Internet. If they're so available already, why not publish the pictures in the book written about them? Out of Internet postings, Danish newspapers, and a book published by Yale for academia -I think the book is the least likely to be read. If the publishers think their book would be the last straw to start another wave of violence -that is the definition of hubris. The reach of Yale University Press is only strong enough and long enough to censure their authors freedom of speech. I worry about the people this censorship might give ideas to -and I don't mean murdering mobs half a world away.
Posted by RKB at 1:01 AM