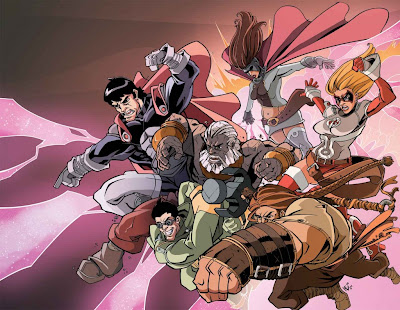 Fallen Justice is a comic from Red Handed Studios available in print for $3.50 U.S. and as iPhone downloads. It's creators are: Cary Kelly and Steven Forbes (writers), Harold Edge (art), Ross Hughes (colors), Kelly again (lettering), and Ken Janssens (editor). The story is about: Fallen Justice tells the story of what happens when the most powerful hero in the world finds out he’s dying and has 3 months to live. The series begins shortly before he hears the news and then deals with the repercussions of what he decides to do, and the lengths he goes to trying to accomplish his goals of changing the world for the better and leaving things safe for average everyday people. Think about it. If you had enough power to do anything you wanted, and they told you that you have 3 months to live, what would you do with that power? Would you be evil? Would you remain good? Would you do evil for a greater good? Fallen Justice is about the decisions a man makes when backed into the ultimate corner.
'The worst day of my life' is one of the best places to start a story
Justice Theta is a Superman type character who goes from the traditional 'shall not kill' view of heroes to knowing he's dying wanting to remove what evil he can from the world -by killing the high powered villains. Fallen Justice fulfills all reader expectations for a superhero story with the hook of a countdown to a world losing its greatest hero. Justice Theta finding out that he is dying comes to embrace the idea of killing the most powerful villains to protect humanity. In these kinds of stories most heroes either embrace the ’do not kill’ ethic, or they run around killing every ‘villain’ in sight. Justice Theta taking off the kid gloves, and also taking time to mark up a hit list, is a nice change. The letters are easy to read, and the sound effects fun to read. Colors suit each event in the story well, aiding the artwork in it's memorable impact on readers. I wouldn't have minded if they were more flashy/bright, but they more than get the job done. From the accidental killing of the costumed villain Tragedy that gave him the idea, to Justice Theta's slaughter of Mob's various identical twins (his power: create copies of himself) their are a number of violent deaths in the comic. I might have wanted the gore of a slaughter to look more realistic, but it is a superhero comic -not splatter punk. The art and dialogue do an excellent job of characterization, you will care about what happens to these characters. I also enjoyed the 'roll call' page which sums up past events and identifies the players. Guardians is the name of the resident superhero team, and it's other members are: Dyna-girl (Justice Theta's girlfriend), Ms. Anarchy and Shockwave (married pair of heroes) Prometheus (he's a mythological Titian, and Justice Theta's biggest critic) Dervish (Justice Theta is his best friend). A early villain faced by Justice Theta is Iron Will a cold blooded super powered killer. Justice Theta spars his life early on with the expected hero higher morality speech. His world view changing on how to handle the villains from that point is depicted in a very memorable fashion by the creators. It's not all about the heroes and villains you met characters like Emily Werner a doctor/ex-lover who gives Justice Theta the bad news. One of the most entertaining aspects of the story is supporting character TV personality/reporter Londonne Nichols. She’s everything everyone has ever hated about the press, and the ‘it bleeds, it leads’ news crowd. Self involved, hypocritical, with her only concern being what will help her ratings. I also enjoy the pace of the issues, not hyper-speed but no marvel/DC crossover, summer-epic, tie-in style, drag assing around. Fallen Justice gets to the point, and makes it thanks to its creators.

Is Paste Pot Pete really a better codename than The Trapster?
One of the biggest problems superhero stories have, apart from the big 2, is no decades long history of stories to draw on. Thanks to the creators talent Fallen Justice doesn’t have that problem. One of the best things about this comic is the way it handles its large cast of characters. It’s easy to believe these heroes and villains have been fighting it out for a while now. The choice of code names for the various heroes and villains involved is also very important. The names can’t sound too silly, or gritty. They also can’t be too much of a fan-boy tribute to the characters of Marvel, and DC comics universe's. A good codename just sounds right, there is no porn star style naming convention, you just know it when you read it. This comic does a very good job in small scenes, and short dialogue lines, leading readers to speculate about what has happened in the past of this world.
Comedy and Tragedy (a pair of sibling villains) come off like the Joker had bastard sons out there somewhere in another comic universe. Over and over again in this comic Comedy just doesn’t ‘get’ why Justice Theta changed the rules by trying to kill him, and accidentally killing his brother. The comics code approved old style heroes are yet another antagonist for Justice Theta. This group of heroes make for a damning stand-in for the United Nations. They would rather talk about revoking Justice Theta’s membership as a more important issue, than trying to save him from a group of super villains actively trying to kill the hero. Darfur?…Darfur?...anyone?...anyone? Another impressive character insight interlude is Prometheus's thoughts before going into battle with Justice Theta: Finally the battle I was meant to fight. A worthy opponent for the last Titian. Father Chronos I will not fail you. In Fallen Justice #5 you see a sequence of panels which are open to some interpretation by the readers. Justice Theta goes under the sea to his secret location hide out. His friend Timothy watches over the place and gives Theta what he wants: files on the most powerful heroes and villains. The Justice Theta after some odd small talk asks Timothy when he hit the alarms. Timothy says from the minute Theta went through the air-lock. Next thing we see Justice Theta flying directly up bursting a hole through his base. Then a image of a surprised Timothy, the base flooded with water, drowned just as dead as can be. Why would Justice Theta do something like that? Cold blooded murder, or so out of it he didn't think about his friends life? Justice Theta got his powers from aliens, and they seem to be watching this all as a test -what's that about? Just how is it all going to end anyway?
You know you have a successful story when readers want an answer to the question: “What happens next?” It’s not like the pacing torment of waiting for a check in the mail, which may never come. You know further installments of Fallen Justice will arrive, just have the patience to wait for a amazing story to continue. You should check out this title and the other works from Red Handed Studios, it's worth it.
Posted by RKB at 6:48 PM