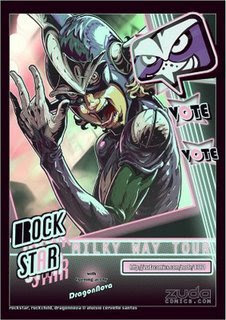 RockStar is a Zuda contestant this month done by Aluísio Cervelle Santos. Basically a group of galactic heroes has a cult mentality and is out to recruit this story's lead hero Rockstar, and won't take no for an answer. That's a great hook which gets wrecked by a confusing fight scene that goes on for too many pages. Here is the synopsis: A boy, who has a hand with six fingers, receives an extraordinaire power from the skies. It set in motion an intergalactic conflict, putting his whole world in danger. Should the boy continue to pursue his musical career? Or should he fend for the safety of Earth? Grab a ticket for this galactic stage, because the show is about to go on!

In medias res isn't always the right option
I liked the sound effects/letters easy and fun to read. 'Arpeggios from hell' was a stand out. I will say the art is damn good, but I also have to say what the hell was going on? The fight scene that ate whatever story this comic had, invoked all the worst qualities of a Dragon Ball Z stand off. The pacing and not exploiting superhero dramatic elements to their fullest is what killed it for me. It starts off well enough with a good first screen that grabs a readers interest. Then readers get a second screen (best screen of the comic) that shows RockStar has arrived to save the day. The fact that this is also the last 'quiet' screen before the denouement ain't a coincidence. Screen 3 is where things start to go off the rails. You wouldn't think a creator could make 5 panel layouts (or less) feel too cramped and crowded, but you'd be wrong. The longer the comic went on the more overloaded and overworked the panels look. The new wore off the 'BIG ROBOT RAMPAGE!' 'BIG ROBOT RAMPAGE!' pretty quick for me. It has too much details in the panels, with no room to breath for the reader. Extremes in storytelling can either work out really well, or go wrong in a major way. I don't know what the polar opposite of decompression would be called -hyper speed- but that the affection this story has. More characterization and explanation of the world the story takes place in, were seen in your average Golden Age 8 pager, where that was far from a priority.

Throwing away great storytelling opportunities is like pissing in the wind
It's a classic superhero conundrum: How do you protect your family once your arch-nemesis discovers your secret identity? The set-up for this was there in RockStar until you click past screen 3. After that it's not brought up again until the screen 8 denouncement which wasn't really about the dangers RockStar's parents faced because of him, it was just the 6 finger reveal. The fight scene failed for me as a reader because of the way it was executed. From RockStar's dialogue it was apparent battles like his showdown with Voltron Wolf Guy had happened before, and RockStar won with no real challenge. RockStar came off like he was facing this 'threat' (no real danger) for the umpteenth time, and was as bored with it as I was by the end. It read as more arrogance on RockStar's part than protectiveness, but he won so he didn't even get called on that. Maybe these other Galactic heroes are just testing him, or letting him win -but that wasn't well shown in the story. It could be RockStar is far and away above any of his opponents power level, in which case you run into the Superman problem. You'll need a kryptonite stand-in, or focus more on RockStar's personal morals/ethics to make things interesting. It could have been saved by using suspense to cut to and back from RockStar's parents -normal humans in real danger-, and have Voltron Wolf Guy try to attack/kidnap them. When RockStar saved mom and dad on screen 2, I thought this would be more of the direction the fight went in. Beyond a 'I'll be back' moment the parents were quickly forgotten till the last screen. Being a complete done in one story actually hurt this entry more than making it stand out. If Santos had done a cliff hanger where it looked like RockStar might lose the battle it would have been more grabbing to me as a reader. The suspense level could have been ratcheted way up to have me, or any other reader sitting on the edge of their seat, but that didn't happen. The panels could have been less busy (tone down the backgrounds) to allow the artwork to have more impact. Instead this comic was a case study of the diminishing returns of explosions and energy blasts in comics. The big dramatic hook that could have maybe gotten my vote (what's going to happen to the parents) and grabbed me as a reader wasn't even really explored.
Posted by RKB at 9:31 PM