Review Captain Moosestash and the Incredible Flying Machine/ In search of adventure in a adventure comic... 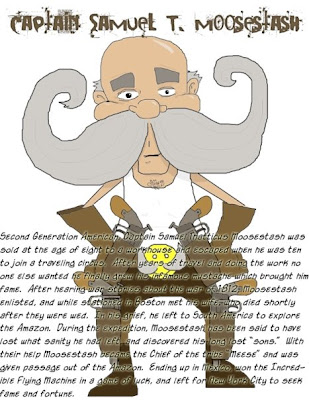 This random azz review is about: Captain Moosestash and the Incredible Flying Machine a web comic/ merchandise line done by Sean Friend. Semi regular update schedule , with a fun airship helm site design. It's cartoon style art work on a (I think) action/adventure comedy that isn't funny -but the adventure part is almost kind of there. The various shirts, caps, and stickers are a cheaper price than S.H.E. merchandise, and is actually based on a web comic. The various chapters are set up in a unlock/key format. One thing to come away from with this comic is the site design is more impressive than the character art work/ story.

It needs more adventure, more adventure I say!!!
The letters are easy enough to read, but too much white is showing, those balloons need to be trimmed and centered. The art is cartoony, but actually fits the subject matter, and all ages approach fairly well. The story starts will Professor Airborne about to unveil his latest invention to 1861 New York. He has a Steam Generator to usher in a new era to the city, which ends with a explosion superimposed by Friend over what looks to be a wood cut. Their was some nice screen layout's when Airborne woke up and met Captain Moosestash, then picked his way out of his cuffs. These two former jail birds then go on the run in the Captain's flying ship. Turns out Moosestash is a bounty hunter who teams up with Airborne instead of cashing him in, to go after bigger game with better paying rewards. There are hints in a panel here, and a panel there that this comic could do a decent bit of traffic on the web. Before that happens a better handle on pace would be needed. Two, or three panels to a screen makes for eating a snail's dust pace. Just because Sean has a infinite canvass doesn't mean his story warrants it. Don't even get me started on the whole 'decompression' deal, the more big panels shots you see in a comic, the less impact it has. Plus repeated similar page layouts can lull a reader to sleep, cutting down on a story's impact. It's as bad as road daze from starring at the same scenery over, and over again. Insomniac web comic readers looking for relief is probably too much of a niche audience for Sean Friend to have real success. Probably.

Where's the sight gags at, oh it's just the same one, over and over again...
One of the fun repeated moments of the comic is Moosestash has the same kind of control over his mustache as Medusa from Marvel comics had over her hair. Moosestash steers at the helm with it, and picks up small objects. It's a good gag, but has a limited shelf life. At the end of the first chapter things start to move (slowly) and you see the future direction of the story. A new villain is introduced and the Professor is pressed into helping Moosestash. Their is also some exploration of Moosestash's dodgy character, as a bounty hunter along with his 'boys'. I don't think I'm the market for this comic, and I'm not entirely sure who is. It's still early yet in the updates, but the title doesn't have much of a identity besides the real star of this work, a prehensile handle bar mustache. The artwork could be better instead of just good enough, but the action has got to start picking up with a pace that grabs a reader, and doesn't let go. I think the art and storytelling will improve as the story goes along, so my advice would be to just read the last chapter and enjoy, no need to spoil the work by seeing how the sausage was made. In web comics land though, who knows if that last chapter will ever be made???
Posted by RKB at 5:00 PM