Zuda review 9th Year/ Mutated, albino, naked Stretch Armstrong -not as scary as you might think 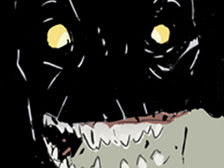 9th Year is another Zuda comic in contention done by Alberto Lanzillotti & Manuel Bracchi. The story is typical, the art is fine, but the weak monster designs kill the thrill level of this comic. Here is the synopsis: In the near future, at the end of a bloody war between humanity and demons, the world is governed by a military dictatorship, whose leaders belong to a secret sect. Taking advantage of an unstable political situation, the army has taken control of the few inhabited centers that are left. Unhappy with the situation, a small group of people formed a resistance, in order to take back the power and to form a new democracy. The main character of “9th year” is Laura, a sixteen-year-old, who sees her best friend brutally killed by one of the demonic creatures. When Laura’s father and the other men prepare to attack the monsters responsible for the savage murder, she decides to go with them and get her revenge. During their travel, Laura discover the real reason her father’s plan. In the meantime, a group of rebels are trying to free a small boy that has been imprisoned by the army. According to a prophecy, this boy is the Elected, the one who might be the real messiah. The only one capable of saving the world.

Was a good friend of mine...
The characterization of the humans in this story wasn't that thrilling to me, that's why I felt let down by pedestrian monsters. It starts off well enough with some establishing shots of a urban castle type setting. You see some cool artwork done on a sort of survivors council it's exposition handled well, but a few more panels per page would have moved things along better. The discussion they have is a monster movie classic: to keep hiding, or go on the attack. Anna was the girl who was 'savagely' murdered, more conversation about this (if not a mental flashback) could have added more drama to the narrative. Laura setting along holding herself was a good start to the creators making the human characters human, but not much follow up. More panels to show off more art, or more grabbing dialogue would have helped. Stories like this typically have a prophecy of a upcoming savior, unless this kid isn't really the Elected, (for a nice twist) I've already read better versions. This army group being corrupted by it's power is another one of those typical and tired elements of these kind of stories. If this plot point is just as describe in the synopsis, again I've already read it -no interest in reading again. Their is too much originality, and realism this month in Zuda for a strip that seems predictable to not suffer in comparison. It could be this strip isn't going to play out as expected -I don't know? I do know the peak into the past/future provided by the synopsis ended up detracting from this comic for me as a reader. With the typical dialogue, and generalized genre survival story, 9th Year needed some awesome monsters to stand out, but that didn't happen.

The demons are like fast zombies
The last few screens deal with the savior kid, and his protectors. Screen 6 does have an awesome layout if only the monsters were more scary. Aside from running out of bullets screen 7's layout didn't bring the action, suspense, roller coaster thrills. The demon in panel 3 looked like he was having a hard time marking his territory -or laying an egg. Readers finally see a demon out of the shadows on screen 8, and you led my description of it in the title of this blog post. Long hair with a machete gets saved by someone off panel, and it ends with longhair being surprised by looking at this person. A cliff hanger/mystery ending that left me wondering why I should care who this new mysterious character is. A full screen shot of a cool looking monster attacking that guy would have been a more impressive spot to end on -for me. The artwork was great on everything but the monsters, which doesn't work at all in a story like this. The story could go in a lot of directions, but a standard write up on the synopsis doesn't make it seem like anything really interesting is going to happen soon. A truly fantastic demon design could have lifted everything thing else up instead of helping tear it down to mediocre hell.
Posted by RKB at 3:20 PM