Zuda review Metropolitan Siege/ How do you say "Burn baby, Burn!" in demon? 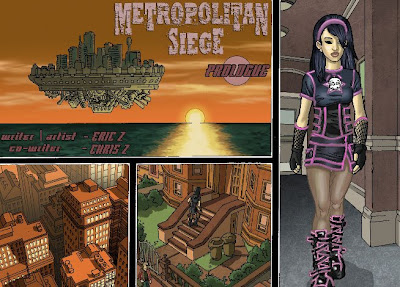 Metropolitan Siege is a Zuda hopeful done by Eric & Chris Zawadzki. The art had a certain crudeness I enjoyed, but their are too many other top notch contenders this month. Here is the synopsis: After being placed on leave and put under investigation for the unintentional death of a civilian, Officer Nikki Cross is entrusted with saving her city, the floating city of New Avion, from a force of nature that has infiltrated the police and exists only to feed off chaos and watch cities burn. On top of dealing with protesters and the media complaining about the increasing reports of police brutality, Nikki must also fix her fractured relationships with her friends and family in order to effectively combat these forces who's ability to stoke a fire only make them stronger with each rising flame.
What do you want to bet New Avion ends up crashing into the water for the big finale?
The story starts off where it should, a establishing shot of the floating city location of this story. Why is the city floating? My guess of course to build drama and sink/crash down into the waves as we get closer to the ending. It would also be a good way to contain that 'force of nature' talked about in the synopsis. [please read the synopsis...pretty please] One panel in and it already has the promise of a fantastic suspense countdown ending. Read the story, then read it again and soak up the potential, don't let that awful thumbnail pic drive you away. After a quiet 'sun sinking down' open we get the conflict started on page two with a funny little (censored) break up fight scene. Only problem with screen 2 is what looks like some gratuitous filter use in panel 2. Just because you can do something doesn't mean you should, and it was more distracting than making the broken bottle look cool. The lead character of Nikki doesn't look like the pin-up queen one usually finds in these stories which I thought was a nice touch. It adds a certain realness to a story with monsters in disguise, invading a city floating over a ocean. We get the first part of the synopsis in the well written exposition conversation on screen 3. Then we move on to the action in screen 4 with the alien body snatcher sub-genre stock character 'someone who knows the truth' but never lives to tell it -A.K.A. the prophet of doom . You get the rest of the synopsis by screen 6 when the bad guys have shown up, and a dead line of two days to start saving the city is given. I really like the doomsday clock effect for adding so much suspense to stories it was great in The Crooked Man, and it's great here. There is a nice cut away to Nikki's friend curled up in terror on screen 5. Those funny moments were the sweet spot in this story, unexpected but welcomed. I want to see Cloud City 2 crash so bad..
BOOM! goes the human Kabuki doll...
Screen 7 we see a very whacked out Nikki's face before she explodes, the explosion was very well done, with a white fire out line of her. I was a little surprised their weren't any ka-blewie style sound effects, but it worked for this story. If it was a movie you would either hear nothing as the explosion went off -total silence-, or some poser hipster life anthem song. Not going crazy on the sound effects was a good call, but the comic would have been even better without the motion blur effects. The Z brothers should know bottles breaking, and doors being kicked in look fine just drawn. The last screen was one of the best screens. That blur effect fuzziness should have been saved for this screen when Nikki opens her eyes. The creators also let you see the monsters as they are which was a neat touch, and good 'evil creature' design. I do wonder if Ayumi is extra tasty crispy fried after that explosion? Being inspired by the L.A. riots to use sci-fi to deal with the degeneration of a city is inspired in and of it's self. The story ends with a nice image of Nikki in terror. It's actually gone up in my estimation the more times I've read it, but this month has even more grabbing reads. It was bad luck to get into a month of such fierce competition for the creators, but I hope they continue their efforts. Their is always the possibility first place at Zuda this month will be like a door knob -everyone gets a turn.
Posted by RKB at 5:48 PM