Their are three main types of story structure for Zuda entrant's, all are featured in this months contest.
Cliff Hanger: You have the most common form with this one. Some dramatic (hopefully) event happens which leaves readers wanting to know how things turn out, and the fate of the characters involved.
This months examples:
Fallen Hunter
Sketch me, Deadly
kogoshii
Small Lives
Quick
The last Werewolf
Sidewise The previous best example of which is to go back and re-read the first 8 screens of Dual. Then read the whole comic if you haven't already -it's fantastic.

Done in one: Has a beginning, a middle, and a end. If this comic never lives on you have a complete short story in the Zuda dead comic graveyard.
This month's examples:
The Urban Adventures of Melvin Blank
Scareshow Spookshow 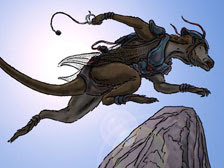 The previous best example of which is to go back and read Terrestrial.

Movie trailer overview: Is one of my favorites, but it's not often done. Basically it's a overview of various characters/events in the storyline, or it does some time jumps to show future/past events.
This month's examples:
The Corpse Carries a Gun The previous best example of which is to go back and re-read Lifespan.

Web comics are serials of course, so cliff hanger is the default story structure. It can work well, want to know what happens next??? vote for me!!! If a creator wants a Zuda comic to pass the 8 screen test, your probably better off going with a done-in-one. If your trying to tell a story that can stand alone, a creator would hopefully be less apt to leave useful details in the synopsis. I love the movie trailer overview, because that shows me the promise of a strip. What kind of world the characters are living in, and possible directions the story could be going in. I also love the synopsis, so that should be a hint I -in no way- represent the masses.
Posted by RKB at 7:10 AM