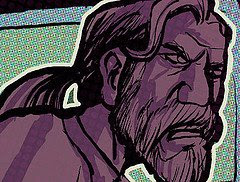 Another Zuda contestant this month is Assignment done by Zuda vet's Anthony Peruzzo & Justin Jordan. Which has a nice opening, and good art, but doesn't focus on the best things in this story, and gives away a lot of the drama in the synopsis here: Twenty years ago a group of scientists found something extraordinary beneath the Antarctic ice. Something unimaginable. All but one, were slaughtered by a teammate who took a long walk across the ice to presumed death. Unfortunately, presumed death isn’t the same thing as actual death, which is why Hatch has to put a bullet through Simon Campbell’s head twenty years later. Hatch, a professional assassin and extremely amateur musician, has never botched a job, so he’s understandably surprised when the man whose brain he splattered all over the apartment turns up alive and well. It isn’t everyday that you have to kill a person twice. With the help of guns, hatchets, chainsaws, and other assorted lawn equipment, Hatch manages to kill Campbell. Then his problems just get started. Hatch unwittingly inherits the power to destroy or, if he's really lucky, save the world. This, of course, means that that everyone wants a piece of him. Dead or alive.

Jump around... Jump around...
One of the things that stands out about this comic is the way in jumps from location/scene to location/scene. This doesn't bother me the way it might some readers, what I didn't care for was giving the lion's share of the screens to the least interesting elements of the story. You have all these different locations, so take advantage of them to the fullest. Screen 1 starts of with a cool artic John Carpenter's Thing homage (with awesome bloody hand prints and everything), but after that first screen is the end of invoking The Thing. It went from being mysterious and intriguing to an annoying tease. I have to say I love the colors of this comic, it made Assignment much scarier than it would have been otherwise. Letters are also fairly easy to read. As much as Jordan came up with a great opening Peruzzo impressed me with his art on screen 2. I loved the warped buildings establishing shot, and the way the colors aided the art throughout. Justin Jordan can damn sure write quiet panels with little to no dialogue, I'd love to see the script for screen 4. The breaking down of the screen to lead to the bullet in the head (rendered with a electric glide energy sparkle silhouette) was great. Whatever the panel descriptions were Jordan and Peruzzo got on the same wave length with this screen. The fact that Simon was checking out musical notes on his computer (along with Hatch's shtick), makes me think the story could have a 'greatest song in the world' sub plot. Music in Zuda comics is a recurring theme/new trend people seem to like exploring. A few panels after screen 4 is where the story starts to go off the rails.

Is it wrong my favorite character here is the mountain man immortal critter?
Explosions sell but Hatch's agency giving him a spanking with a exploding guitar case was the least interesting part of this story. To put it another way: the more I read the story the more the explosion 'boom' fucked up the creepy vibe of this comic. It ended nice and creepy with a electric shock induced scream session of Simon's kidnapping victims. I also noticed those giant bad ass speakers in the back ground. Awesome panel layout for the last screen which just made me sad the lead (Simon) was for the better part of the story buried for the musician hit man. The synopsis which tips off the next big story beat's outcome also detracts from that spine tingling feeling from reading which could bring in the voters. It could be Hatch is super cool, aside from killing the old man and a sniper's bullet plot point, he didn't do anything that interesting. Knocking off the old guy also knee-capped Hatch's rootability as a hero. You can't be a good guy, and be killing Grandpa, anti-heroes can't even pull that shit off. If it's Hatch's road to redemption, why should I care if he gets redeemed? If it's greater evil vs. lesser evil -Simon is just plan cooler. It ended up being a 3 screens forward 5 screens back kind of deal. I am damn happy this comic wasn't burdened with the word 'the' in front of the title. The story had all the possibilities of being great, Anthony Peruzzo & Justin Jordan just didn't work it enough to really fit Zuda well.
Posted by RKB at 4:01 PM