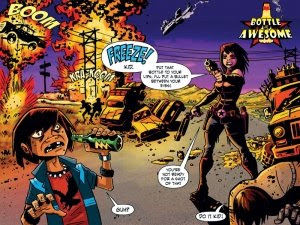 Bottle of Awesome is a Zuda instant win comic done by Andy Belanger. It got a favorite from me, the expected 'high school torment' section goes on too long, but screen one is a flash forward which shows the comic is headed in a very enjoyable direction. Here is the synopsis: This is a story about a boy named Billy Butterman, a loser, a putz - what have you, just trying to get through grade nine. High school is a total nightmare. All the cool guys at pick on him, chicks don't dig him and everyone at the school calls him "Butterpants," because he had bladder control problems till he was twelve. That is, till the day he finds a hobo in an alley. Billy notices the bum has a full bottle that he’s not drinking from and the bum tells him it is because the bottle is full of awesome and that a a sip will make him awesome as well. He warns the boy that a person can get too awesome, but will Billy heed his words?

It's like Spider-Man only with energy drinks instead of a radioactive arachnid
Screen 1 does what a first screen should do and grabs the readers. You see explosions, planes crashing, wrecked cars, and a secret agent babe threatening to shoot a little boy between the eyes. The kid is being encouraged to take a drink of Awesome, by a fallen formally Awesome guy. Really a grabbing opening screen and the good read continues when we see the secret agent girl before she went bad ass. Her name is Morgan and she had a 'nerd crush' on Billy, who we see is the number one target for bullies at his school. The strong point in the writing is Morgan's take on events, and her thoughts on Billy -as I live and breath well written text boxes!!! The text boxes do a good job of explaining the situation Billy finds himself in at school, and a reason for his later actions. The art is cartoony, but it fits the story well. After a while your eyes adjust to the green,yellow, orange color scheme, and you just become numb to it. The layout gives you a number of panels per screen, but it needs to be read full screen to avoid that 'cramped' feeling. The bullies torment section felt really cluttered, with more then the needed panels showing Billy's treatment at the hands of Donnie Douche and friends. Another reason to go full screen is legibility of the letters is poor in the smaller view. The best written part of dialogue for Billy is his self comparison to Charlie Brown, you get he's on the end of his rope. Being the outsider nerd does invoke memories of early Spider-Man, it's a nice arch type legacy for this comic to tap into. The bum handing over the bottle scene on screen 5 invokes Captain Marvel meeting Shazam, and The Monkey's Paw. Screen 6 when Billy first takes a drink of Awesome was a day glow assault on the eyes, but Billy looks high as a kite so a pretty funny 'I got my powers' screen. Which all sets up a good 8th screen cliff-hanger with a bus being stuck halfway in the school. Morgan figuring out Billy did it some how, some way, also made sense for the character.

Chug-a-lug Chug-a-lug
It wouldn't be a superhero comic without the villains, beyond the bullies you also have their ring leaders father and high school teacher -Dick Douche. Who is portrayed as a whacked out Principle Vernon meets Elmer Fudd type with a hard-on for authoritarianism. it's easy to see where his son gets it from. Their are also some funny scenes with Billy and his friend/confidant Fat Rick. I got to re-live all those fond crazy memories of the Freedom fry debate from a few years ago. The Front de Liberation Qubec gets dragged into the story along with the Irish Republican Army to help show Fat Rick's character. We also see a new character in the figure of Big Dan who tells Donnie and company to go somewhere else, then punches Donnie in the face. At 11 screens in so far we have the heroes, villains, side-kicks, and a portent of doom from screen 1. It's a involving action/adventure super-hero story with any number of directions it can go in. It's a fun action hero comic, that delivers on being entertaining without trying to be too different -yet. The writing of Morgan's character and a excellently paced story will keep you coming back as a reader.
Posted by RKB at 3:32 AM