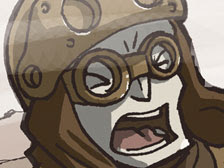 Sidewise is a June Zuda comic done by Dwight L. MacPherson and Igor Noronha. Another comic that is technically proficient, but failed to grab me as a reader. Here is the synopsis: Teen genius Adam Graham borrows his parents' time device to visit 1902 London, only to find himself in an alternate dystopian past. As a member of Nikola Tesla's band of young freedom fighters known as SteampunX, Adam must wage a war against a myriad of deadly steam-powered robots, mad scientists and a nefarious state police controlled by Queen Victoria's preserved brain to free the oppressed nation, crown a new monarch and return to his world in time for a final exam.

I like Poo (the comic) better than this
What negative criticism can you have when the art/dialogue/colors/letters/ are professional, and even the cliff hanger pace fits zuda? I can say it's soulless, it doesn't seem any of the characters have much heart. Readers need to care if their fictional friends live, or die to have a reason to read further installments. I can say it didn't grab me as a reader because it was a proficiently done, but seemingly typical story. Their have been a lot of alternate world stories, just being decently written and decently drawn isn't enough to stand out. It's possible with more screens something could increase my interest, but you only get these 8 to judge. In a repeat of last month this is another case where one of the creators previous/other web comic grabbed me as a reader, when their Zuda entry didn't. It starts off with text which puts me on my guard, but it is needed the way the story is set up. I don't mind the info dump that much, but the creators didn't give me a reason to care. A alternate time line gone haywire could be a interesting set-up, but it reads like most other stories in the genre. Even Queen Victoria's brain as a baddie just seems like a nod to the Doom Patrol. If you want to grab me as a reader a zuda hopeful needs to have at least one shinning moment in their submission. It goes without saying (but i will anyway) the more cool as hell moments you have, the better a chance of getting my vote. The best thing about this comic was the way the varied panel layouts aided in the telling of the story. The events within the panels came off as standard steam punk without a narrative punch.

being proficient isn't being spectacular
I know some people got a kick out of the Tesla inclusion, but it didn't do anything for me. Talking about a character we never see (Fawkes), was a nice little mini-mystery. Having the kid reminisce about how: it was like watching a steampunk magazine come to life was hitting the readers over the head with the 'too damn obvious' sledge. It ends with a fantastic little cliff hanger blub: If I had known then what I know now, I may have chosen a quick death. The problem is we see no hint of this upcoming bad turn in the 8 screens. A cut away panel showing a portent of that bad future would have increased my enjoyment of this comic. We could have seen a jump ahead in time in the last panel showing Adam beaten and bloody about to be killed. A panel just as ominous to match the ending voice over. The creators could have showed Adam in a tech suit, Adam as a floating head kept alive by SCIENCE, hell Adam with a eye patch would have worked. A really good 8th screen can bring a comic slightly back from the brink of average fare. I also wonder about the story structure should this comic win. Time travel would seem a tailored made concept for playing around with the temporal order of events. It seems this story is going to be told fairly straight forwardly, with a few journal entries for foreshadowing/exposition background purposes. I would like to read a time travel story with a fairly original hook for example: nothing a character does in the past can really change the future. You go back to kill Hitler and do, but some other person steps into that role. Alternatively characters could find out their history books were wrong about any number of things, that has been done before, but not lately. Ending up in a 'days of future past/present tense' world does offer possibilities to be exploited. The problem is so many other people have already been there, you have to show me what makes your dystopian past any 'worse' than the rest.
Posted by RKB at 1:45 PM