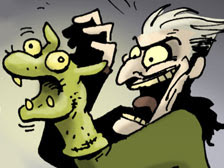 Scarecrow Spookshow is another June Zuda comic done by Aidan Casserly. It got a favorite from me for the subject matter, and being pretty funny. Here is the synopsis: Barron DeMonte is a strange old man and former host of Screech-O-Rama Creature Feature, a low-budget horror movie show. After twenty-seven years of ghosts and monsters and shouting, "Boogah boogah!", Barron is finally forced to retire and leave the spook show behind. However, adjusting to life on the outside world isn't easy for someone whose mind is back in Transylvania.
Living with Barron in his lonely old home is Jiselle, a Goth girl with no passion for horror and zero tolerance for being embarrassed by her crazy old grandpa. Jiselle thinks Barron may just be certifiably insane, until strange events begin to occur. Is Barron really crazy? Are all those old monsters and late, late show demons for real? Is the old house haunted? Will everyone end up completely nuts?
Going mad may just be the best spook show of all!

The lead reminded me of Sivad


Video 1 is the original opening. Video 2 is the original opening plus some corny jokes. Video 3 is even more corny jokes as well as a overview of the 1964 TV line up on WHBQ-Memphis. Sivad was the first thing I thought of when I saw the retired 'vampire host' character. Imagine a man dressed up like Bela Lugosi, dressed up like Dracula, with a completely obvious mid-south accent. At the time people like Sivad inspired terror in kids across the country, in retrospect it's more humorous than anything else -corny jokes with bad punch lines and all. My parents got their chills and scares from watching Fantastic Features way back when. That show beget my fathers interest in horror films, which beget my interest in horror films. Horror being my number one go-to genre of choice. Sivad (Watson Davis) did special appearances at drive-in's across the mid-south. My folks even have a autographed picture of him. So of course I latched on to this story immediately. The strip Scarecrow Spookshow has more connection to real reality then one might think at first. Local TV 'stars' who got sacked by the passage of time, and changing public moods.

I wouldn't mind if this comic got hit by the Cerebus Syndrome
Letters are easy to read, the colors on this comic are very impressive. The scripted jokes are very well complimented by sight gags carried off by the art. I liked the yell on the last panel of screen 1. The excellent color job on this comic takes it beyond your expected gag-a-day strip. Everything in a comic matters because it all adds or subtracts from the read. The switch out to gray tones in panel 3 on screen 2, really stood out to me, and helped reinforce our leads mood. It also showed this could go beyond just a gag strip. Then the closing hand puppet gag, and Jiselle's expression -great work. There is more going on here than the 'wacky old man' doing 'zany' things. You get this character doing humor, but you also see real sadness in the character over his life's work being thrown away. You see this in particular on screen 3. Which is especially hurtful considering the Nelsons are run by a bunch of corrupt, inept, lying bastards in real life, and the comic version of them is probably worse. Barron DeMonte's rant on screen 4 is particular well done dialogue. Corny jokes/screen 5 true to life and a great fit. Screen 6 shows Adian's skills at art and screen composition. I loved the faded out pterodactyl in panel 2. A new character named Krog in introduced on screen 7. It could be a real monster, but that looks like a zipper on it's belly in panel 2. If it's a real monster, or a guy who just thinks he's a monster it has amazing potential for equal parts comedy and tragedy. Screen 8 is even more nice character interaction, with more corn ball humor. Jokes so bad their funny best sums it up. This comic has a lot of promise, a number of directions it could go in, plus a very professional look. I don't know that Zuda would ever be the best home for it, but I'm glad I got the chance to read it in the contest.
Posted by RKB at 4:08 PM