Zuda review Quick/ So who killed Satan in your last comic?

Quick is a June Zuda comic done by Zuda vet Thane. It was a very fun read, had all the right beats of a story, and got a favorite from me as well. here is the synopsis: Following the successful test-run, Quick and the Clock Smith begin their journey down the King’s Road to Castle Bramwell. Many travelers, most bearing some invention or another, fill the roadway. The following day all across the country the entire kingdom will celebrate the King’s birthday. But the biggest festival will be at Castle Bramwell. There, skilled craftsmen from all corners of the country will have the opportunity to present the fruit of their labors before King Philip himself. Along the way, Quick and the Clock Smith are ambushed by bandits and taken captive. The bandits, a motley crew of savage thugs known as the Black Forest Bandits, are uncharacteristically well organized and efficient. This appears to be the direct result of new leadership. The bandits have been taken over by Firius, a disfigured half-man, half-dragon monstrosity who claims to be the first-born, bastard son of the old king and the rightful heir to the throne. Firius intends to violently usurp the throne and claim his inheritance, even if it means slaughtering every man, woman, and child in the kingdom. And he wants to use Quick to do it.

"The throat must be mine," said the count. "I claim it as my privilege." "It should be mine," muttered August. "I am the eldest and it is long since I fed. Yet I am content to have the breast." "The legs are mine," croaked the third monster. "Legs are always full of rich red blood."

-Frederick Cowles, "The Vampire of Kaldenstein"

The story opens with some nice Vampire of Kaldenstein style tribute dialogue, and just gets better from there. I loved the opening, and the well written monster dialogue really entertained me as a reader. We got monsters, a fair maiden, and a clockwork knight! I enjoyed Thane's last comic, and I enjoy this second outing. Thane has an enjoyable art style, which makes good use of screen layouts which aid the narrative. After reading the first screen I said to myself "self: unless this story somehow ends up completely in the shiter it's getting a favorite from me" -well it got a favorite, and is in my top three. The sequential panels using Quick's P.O.V. draw the readers in, monster designs are appropriately horrific. The letters are fantastic, and I love the way they're used for the different characters. I also liked how the lead monsters word balloon placement was used to guide readers eyes along the panels on screen 2. The black borders gives the comic a ' Quick seeing through his visor' effect which made for nice panel framing in all of the P.O.V. shots. Screen 3 was a nice full screen shot that didn't skimp on the blood spray. Someone gets a body part cut off, I expect to see the gore flying to a minimum degree -Thane doesn't disappoint. If you read comics in the early 90's the monster's will remind you of the Violator. The visor effect makes for some deep blacks which make this brightly colored world stand out. The colors are excellent. With the early action and dialogue a reader easily grasps what kind of fictional universe these characters are operating in. As much as I love it, the synopsis wasn't needed in this case.
[I can't believe I just typed that ;)]

Bring the chain back and add to the coolness 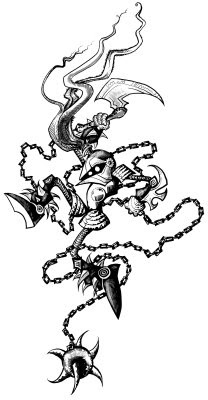 Except for the blood spray screen 5 was a let down. Sequential action sure, but not enough was going on. Screen 6 is back to being excellent in the layout, A nice big pool of gore, and some funny 'just how fair a maiden is she' style dialogue between her and Quick. The reveal of Quick's face is a great screen and the real ending of this comic before the denouncement on screen 8. The art is so impressive, and (considering the circumstances) surprisingly expressive. The comic closes with The Clock Smith and William the Investor discussing Quick, and giving insight into his origins. The comic even ends with a pull out establishing shot. The pace is a perfect fit for Zuda with plenty of action and dialogue. Thane did a great job on everything with this comic, and it deserves to be in the top three.
Posted by RKB at 9:39 PM