Zuda Review War Of The Woods/ The winner and latest champion 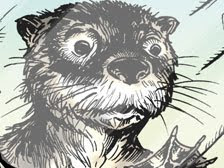 War Of The Woods by Matthew Petz is the winner of Zuda January 2010. It got a favorite from me and my vote, here is the synopsis:  War Of The Woods is a classic alien invasion story told from an entirely unique point of view, that of the animals of the New Jersey Pine Barrens. Father and son otters Nathaniel and Phinneas Waterbrooks will embark on an adventure with close friend, turtle Issac Brownshell. They, along with the rest of the animal kingdom, will not only survive but fight back against the greatest threat the planet has ever known.
Phin is a young Otter who loves reading the forgotten comic books of hikers and campers. Nathaniel, his father, is a fisherman descended from a long line of fisherman. He has cared for Phin alone since the death of his wife. Issac is his good friend and a grandfatherly figure to Phin. Through the eyes of these three we begin to witness the invasion. When UFOs begin descending upon the Earth the lives of all animals will never be the same. War Of The Woods is sprawling saga that will introduce us to the animals and their societies during this crisis. Phin will find himself at the center of a great war, a war that will take our characters all over the world, and a war for the future of the planet.
War of the Woods is an epic adventure along the lines of The Road, Lord of The Rings, and Aliens. It follows the quiet moments of survival and the explosive moments of a planet on the brink. At its core it is about a father and son and the bonds we all share during extraordinary times.


COME DESTROY OUR WILD AMERICA
The synopsis is a bit on the long side, but it does a good job of setting things up, and previewing future events. The lettering is completely readable, and I'm glad the comic is in color, black and white wouldn't have been as impressive to me for this story. The art and story was a perfect fit and this really impressed me. You had big moments in the art like the screen 6 full screen shot of Phin, Nathaniel, and Issac, riding off on Darby the deer, and smaller touches like the spaceship reflections in panel 2, screen 2. With the dialogue you had Phin shouting WhooHoooo! as he rode off using Issac as a helmet, and Phin and Nathaniel worried this would be just like the alien invasion they read about in issue twenty of Super Adventures. All of this adds up to great characterization, and the more readers care about your characters, the more inclined they are to vote for it. That elusively defined 'story-book' feel is what makes it, or breaks it for a story like this, and it looks easier to pull off than it is. Heroic good-guy characters not hit with not too many gray strokes coming together in a fantastical story to face some sort of danger. The use of animals as main characters doesn't just provide a different take on the classic alien invasion story (just what are animals up to with humans are fighting an invasion), but they can also engender a great deal of sympathy, and a quicker connection to readers than human characters. Reading this comic is almost enough to make you want a pet otter, similar to the 'naked mole rat' effect of the Kim Possible cartoon. As the story goes on you're introduced to more denizens of the forest as the animals go from listing to the radio to watching TV. The cliffhanger last screen was well done revealing the alien menace, and showing the animals surprise -which matched my surprise. Those are some scary looking aliens to be going up against!

I WANT TO SEE AN OTTER DRIVING A TANK, MAKE IT HAPPEN MATTHEW
To use technology, or not to use technology? Or, just how human-like to make these animals anyway? I actually enjoyed the idea that most of these animals know how to operate a TV, a radio, and -evidently- read discarded human magazines. I understand it was a question to Matthew about how tech-savvy to make the characters, but I think making them just a little more human in that regard opens up story-telling possibilities. The big hook of this story is seeing what the animals are doing, while the humans fight off the alien invasion. You can guess that the animals will confront the aliens sooner, or later -but how that goes I couldn't guess. The future direction of this strip and possible twists and turns was a big draw in it winning the contest. You just don't really know what's going to happen next? The reason I think it won (besides a get out the vote effort) is how well it managed to make you care about the characters with great characterization in only 8 screens. Just because that doesn't happen often in any given  contest doesn't mean it can't be done.
Posted by RKB at 8:14 PM