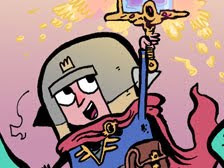 Phantom Sword was a January Zuda competitor done by Nick Edwards which finished in the third spot. This is the synopsis: Henry, a young, adventurous boy and his guardian Gumb take on a quest that could be their greatest yet. They once again run into the notorious demon wizard, Shanks, as he corrupts the forest and turns the once good creatures against them. Through use of Gumb’s book of monsters and the power of Henry’s Phantom Sword they must slay and capture the beasts of the forests. Yet not all the creatures can be defeated so easily. Therefore the duo must take on multiple quests in order to obtain the necessary trinkets, armor and weapons needed to slay or free the beasts. As these events unfold and our heroes get closer to Shanks’ lair we start to discover more about our intrepid adventurers, the mysteries behind the Phantom Sword, the secrets of Henry’s father, Gumb’s origins and Henry’s forced premature jump into adulthood. Phantom Sword mixes epic fantasy, a buddy movie and the smaller more significant accounts of a young boy becoming aware of the world around him.


THIS COULD HAVE BEEN A SID AND MARTY KROFFT TV SHOW
Gumb is a egg shaped fuzzy, wuzzy, with magical powers, Henry is the young errant knight on a  acid trip crusade. The thing that stands out most about this comic is the coloring work. The star characters stand out like a neon sign in a already colorful back drop. They're looking for a forest god named Gregory and they find him on screen 3. The character design on Gregory is as tripy as the other characters, it serves to draw you into the story. Turns out Gregory has a translator -who's an owl- who offers our heroes a quest. Henry accepts the quest with a flourish as he pulls  the Phantom Sword out of it's scabbard and readers find out some evil forest flower is tainting everything causing the woods and woodland creatures to rot and die. The comic has a good pace that moves right along through the story without wasting screens. Shanks is a demon believed to be responsible for the evil plot and the art works well with the character narration to tell the story. The reward for this quest added some humor to the comic. With a bag of gold, and a bag with badges on it offered, while Gumb wished they had heard what the mission was about before accepting it. The lettering was done in a fun style that stood out on the page. It ends with Henry coming face to face with a huge -fairly scary- monster summoned by Shanks, and Gumb being knocked out cold by a lighting bolt.


WHAT CAN WHIMSICAL FANTASY DO FOR YOU?
The most impressive quality this comic has is how well Nick makes use of the 8 screens you have in a Zuda contest. You have a good bit of story with no drag assing around till you get to the payoff confrontation at the end. It's not my go-to genre, but I do appreciate the effort that went into this comic. It is more of a all ages/younger readers tale in style, and it didn't have enough elements for adult readers to grab me. No lines or jokes that worked on two levels and would be a wink and a nod to grown-up readers. For younger readers I don't think it would be challenging enough. Scary monsters and a powerful sword are nice, but a more complex/convoluted plot line would have helped not hindered this comic. Everything was well put together but more background on the two lead's, lines aimed at older readers, or more expository dialogue would have made me feel there was something here for everyone instead of just younger readers. As it was, this comic either missed my age group -or I'm too old and grumpy to embrace the whimsy.
Posted by RKB at 3:43 PM