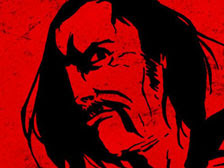 Road Monster is another Zuda competitor this month done by Nicolás Raúl Sánchez Brondo and Diego Cortés. Here is the synopsis: Road Monster is a quest, an attempt by father and son to free from a curse. They must travel across a country that is packed with monsters, demons and horrors. They will face terror the best way they can. They will try to help the innocent and pure, seeking to stop the evil they see around them. They follow a legend of an exorcist, who lives on the road and fights the forces of darkness. They will not stop until they find him. Will they survive the madness and horror? Will they escape the curse?


A LITTLE LESS ATMOSPHERE, AND A LOT MORE CONVERSATION?

From screen 1 on  that Grindhouse film feel transposed over to the comics medium is alive and kicking. It starts out with two men pulling up to some out of the way hell-hole house in a appropriately dissolute landscape. They look like a pair of bad asses and you just know some violence is going to be going down by screen 8. On screen 3 they pass by a young child begging for help on their way into the house, which was a nice dramatic moment. It was very effective way of revealing character without having to resort to a lot of dialogue. I figured it for a artistic decision, the trouble is that kept things too quiet between the characters, when more of a conversation on later screens would have given this comic more of a chance to standout. Minimalistic dialogue is all well and good, but the more you can establish about what the hell is going on in your story the better you avoid being a generic entry. How dare I call their work generic!!! Two guys ride around in a kick-ass car fighting demons, what does that sound like to you? No the answer isn't the Supernatural T.V. show. If 'two guys ride around in a car fighting demons' was all  Eric Kripke had when he made his pitch Supernatural never would have ended up as a show even on the WB network. Originally they were two tabloid reporters, but that got changed to two brothers. Here in Road Monster the two men are father and son, lots of drama can be found there. The problem is if you only read the comic (a lot of Zuda readers don't go near the synopsis) you don't even know they're father and son. If you only read the comic you don't even know they're father and son. Just how hard would it have been to have the younger man say "okay dad" just one time. I automatically care more about a father and son, instead of just two guys, in a story because of all the possibilities that opens up. If something goes wrong will the father be forced to sacrifice himself for his son? Will the son sacrifice himself for the father?   How does a family end up in this kind of situation? How does the dad feel about the son tagging along risking his life? These are all questions readers would wonder about, and pay more attention to this comic to see what happens next, if the readers knew they were father and son. Give  readers a reason to give a damn about the characters.The coloring of this comic moves from nice and edgy to something more along the lines of Grendel: Black, White, and Red. The transition to so much red and black was jarring, but jarring worked to make the art more impressive. The comic ends with a cool looking demon exploding out of a out-house while taking a shit at the same time.


REINVENTING THE WHEEL, UNDER THE SUN

I've only ever seen one episode of Supernatural (don't like the show), but come on, this comic lends itself to an obvious comparison to that show. The creators probably are going in a different direction from that show, but it doesn't matter. Two brothers riding around fighting demons, a father and son riding around fighting demons. The comparison is going to happen. It happened with past Zuda winner Celadore done by Caanan Grall . It has a young woman who fights vampires, Buffy the Vampire Slayer has a young woman who fights vampires -comparisons were made. The two stories are actually nothing alike (I think Caanan even said he never watched the show), but the comparisons were still made. It happened with the original Captain Marvel and Superman, even though besides good guys in capes with vast super-powers in common, the characters are very different. Comparisons are going to happen, it's up to the creators to take things in a different direction than what readers might be expecting. You can't show all that in 8 screens, but a little more conversation could have given a little more insight into the characters.
Posted by RKB at 1:32 PM