Zuda Review Iron Sam/ Wonder what the Yojimbo program does? 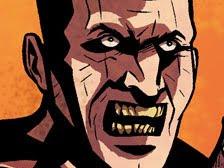 Iron Sam is another Zuda competitor this month done by David Dumeer. Here is the synopsis: Iron Sam, a pipe wielding robot-samurai, is found kicking ass in what appears to be a dystopian future, or more specifically, a scrap heap in some sort of dystopian desert future. What Iron Sam has to do with a gang of bikers, a little girl he saved, and a local bordering town has yet to be uncovered. What we do know about Iron Sam is that he doesn't "play nice" when threatened and usually literally carries out whatever taunt is hurled at him. What we'll learn is where he comes from, why he follows his directives so violently, and what the deal is with the local town, in the future adventures of Iron Sam.


NOW THAT'S HOW YOU WRITE A SYNOPSIS!

I'll get to the comic in a minute, but right now I'm just slightly in awe of how well that synopsis is done. It names the major players in the comic, talks about the set-up/world of the story, and previews future events and conflicts. It also doesn't go on forever, but just covers what it needs to cover. Dumeer could run a clinic for synopsis writing, and the way things are looking, he needs to. Most people seem to care less about the synopsis, but I'm one of the people who do care.

You had a very well designed first screen that mixed Iron Sam's Robocop style directive screen, with the dark interiors a little girl is hiding in. The art and story mix well with Iron Sam getting some nice action hero style bad-ass lines. It always helps when you have some dialogue to go along with the action scenes. The fight scenes were pretty graphic for a Zuda comic: arms chopped off, people cut in half, those previously mentioned guts hanging out all over the place. Whenever there was some serious blood-letting going on the panels were tinted red, which made for a nice effect. The colors were very well done, and all the lettering was readable. I liked the style of the art in individual panels, but the actions scenes were more gory, than kinetic. So what the hell do I mean by kinetic? Great action scenes in comics do a better job of representing movement, the transition between one fight to the next flows better, and looks smother. Iron Sam here was a little stiff  -swing your weapon, strike a poise, kill a bad guy, strike a poise. The other half of the bikers body still standing, then a last spurt before it tips over on screen 5 didn't really work well either. It's fully possible David didn't want to show Iron Sam having any moves besides hack, and then slash as a way of representing he's a tough character against some weak opposition. I think it would have been a more interesting 8 screens if Iron Sam would have had more of a opponent to overcome. Quality not quantity of villains and bloody severe 'kills'. Heroes and villains only look as good as their opposition, it's only a 60 screen contract, no need to beat around the bush too much with nameless henchmen, show us the really impressive things Iron Sam can do.

A samurai character with a young kid in tow is a nice nod of the head to Lone Wolf and Cub. Flip things around so you have a dystopian, apocalyptic, and mutant filled wasteland with a robot samurai, and you have a whole bunch of action filled genres coming together at one time. One of the really impressive scenes in the comic is when Iron Sam discovers the young girl and pronounces her threat level... minimal. Iron Sam 'rescues' her then rides off into the sunset (literally) with the remnants of the dead bikers in a cart on the back of his bike. The last screen is three panels of the girl being impressed with in the final one some kind of Spider mutant's face coming into view. I was a little surprised Iron Sam would just ride off and leave her, but it must have something to do with his Directive 2. It ends with a danger hook cliffhanger and also a nice bit of mystery. Aside from the stiff fight scenes, it is a fun read with plenty of talent on display from the creator. I'm not that sure this title would be able to grab my interest (not just be action filled fun, but find some way to stand apart from what's gone before) enough to be a must read for a remainder of 52 screens. Iron Sam has everything and the kitchen sink, but you should have left the kitchen sink out of it. Meaning: robots, wastelands, sword fighting, kids in peril, mutants, this comic in 8 screens has everything you could imagine, but doesn't really hint at anything action fans wouldn't expect to see in a amalgamation. Still Iron Sam had some neat moments in dialogue and design, and I hope to see David Dumeer back in Zuda with a even more ambitious entry.
Posted by RKB at 1:31 PM