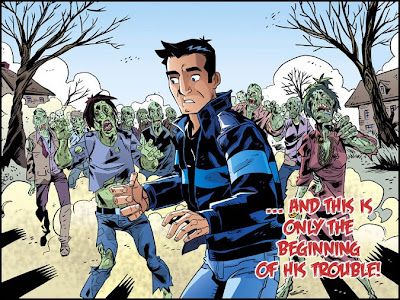 7. Did you do any research to prepare for writing this story?

“Any similarity to persons living or dead is purely coincidental.”

All kidding aside, the societal elements addressed in Gone Zombie have long been a part of our collective consciousness. No research necessary.

8. In these first screens you’ve given readers a great deal of characterization for Kurt, and shown a real dark corner in a dark world. Another dark corner is the religious cult the ‘End-timers’ that Kurt’s sister Nancy and her son Billy joined. Did you base part of this storyline on the tragedies of real life suicide cults? How do you plan on making these cultists sympathetic, or do you even want to?

Did I base it on “real life” suicide cults? No. But on the ideas such groups propagate? Yes. And sympathetic? No, absolutely not.

9. To reveal, or not reveal the cause of a zombie outbreak: what’s your stance on this, with Gone Zombie?

I had one planned and removed it. It doesn’t matter for the scope of this story. These characters have to deal with the fallout of this unnatural catastrophe, not its cause. If the story was about a bunch of scientists trying to prevent such an unholy plague, then the reason behind it would become much more important. There’s also a more practical reason: I don’t have that many pages to work with here and would rather use what I have to follow these characters.

10. What’s your take on zombie fatigue? Did you anticipate running into that feeling with this Zuda submission?

The whole “zombie fatigue” thing did take me by surprise a little. More than one commenter said the equivalent of, “Oh, zombies. Forget it,” probably without giving the story a chance. Had the story debuted a few years ago, as intended, maybe we could have avoided that. Be that as it may, I think the folks that gave it a shot came away happy enough with what they saw.

11. What themes do you want to explore with Gone Zombie? What are some of your inspirations to tell this story?

Themes? Power, fear, anarchy, family, love and hope. That sounds like a lot, but I really do believe they flow naturally from the tale: I’m doing my best not to force a fit where there isn’t one.

Inspiration? Let’s come back to this one if we’re fortunate enough to wrap up the story.

12. What can old and new readers expect to see in the upcoming updates?

I’m torn. I want to answer this in a mannered and intellectual manner, such as:

“Human drama, with hair-raising adventure and even a touch of humor, as our protagonists make their way through the merciless landmines of an insane world.”

But I also want to say:

[A big thank you to Stephen Thor for taking the time to do the interview, and now you should give Gone Zombie a read]
Posted by RKB at 9:30 PM