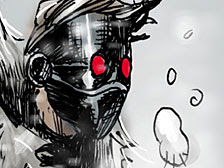 Arctic is a August Zuda competitor done by Ghost. Here is the synopsis: You know your day is going to suck when you wake up with a pounding headache and no memory of who you are. The cold chills your bones, and it might have already claimed a few fingers and toes while you were knocked out. Oh yeah, and the reason you were knocked out was because you’re a survivor of a spaceship crash. So you survived...That’s great, isn’t it? Even with no memory, all you have to do is sit back and wait for rescue. Except this is one of those really BAD days, and you’re not the only survivor. In most cases, that would be good news, except everyone else seems to be madmen, monsters and murders. BTW, some freak in a mask and a sniper rifle really wants to put one between your eyes. Join the man with no memory as his day goes from bad to worse and then some. Will he survive the frozen wastelands? Will he survive the killers and monsters? Will he survive?

The art and colors are fantastic, the snow looks like snow, and drawing sequential action wasn't a problem for the creator at all. The speech balloons throughout the comic are done in square boxes. At first I thought this was a neat depiction of a voice-distortion caused by the mask the lead character was wearing. Then I realized it's just the way Ghost decide to letter the comic. The letters are completely legible, and that's a good thing. The art is the strong suit here, and it would have been a better read had the creator let that be more of the focus. With Ghost's artistic talent he/she could have just used facial expressions, without the average quality wordage detracting from a screen. Ghost has a nice Vincent Locke quality going, but didn't make his words mesh with his art. Others have said that already, but I repeated it cause it's true. One time the dialogue does work well, is when the main character is talking to himself. On screen four you see him think of a text box thought balloon question, then another box word balloon to answer it. It turns out his name (maybe) is John Davis, Space Marshall. He falls down in the snow, and then stumbles across an alien 'Hagen' -who promptly gets shot in the head. Screen 7 is positively beautiful, and a factor in that is: no dialogue/captions, just sound effects. The way the snow blows down from the figure on the crest leads viewers to look at John Davis. Not to mention the pool of alien Hagen blood developing. The figure who fired that first shot, loads another round -with a nice sound effect. It ends with a title screen that has John Davis saying "oh God" one more time, with a pink laser-sight dot on his forehead. The lead character having amnesia didn't bother me that much, it's a tool to add to the mystery. What did bother me was all those oh lords/oh Gods/ Where am I/who am I -in the script. It would have been a much more interesting 8 screens without any words beyond sound effects. I'd say this to Arctic readers, click back through the comic, ignore the words, and see if you can't still follow the basic narrative? The art's good enough that you don't need sub-par dialogue -let along text-box thought balloons. Screen 4 was the one exception where the words/thoughts were well scripted. It could also keep the dialogue that's in 'alien' just so people know it's an alien not a mutant. If the art is that good, and it is, why wreck it with fugly square balloons? legible font alone can't justify that.

I don't see much daylight between a B+ review from Bryy, and a 3/5 stars opinion from Bluescale
I know I'm not a journalist, and have never claimed to be one. I know you can't have a personal bias against a comic book creator you don't even know besides their handle: 'Ghost'. I know I have more than one follower, but everyone 'comic blogging' started off with none. I know what the differences are between the first 5 minutes of a James Bond film, and a movie trailer style Zuda submission are. Those first 5 minutes, are to get a viewer excited about another installment after the title sequence. Most people already know who the major player is as well. It is James Bond, so you have a reasonable expectation of what kind of story your getting. If the first 5 minutes don't do anything for a viewer, you might as well stop watching. On Zuda their is nothing after the title screen if you don't win, or continue on elsewhere. Arctic was told with a 5 minute Bond action sequence style structure, with none of the history that plays on. The potential for excitement in Arctic got trampled on by the dialogue/captions. Movie trailer structure gives an overview of the various characters/events that are going to happen in the story. It doesn't do one whole scene, it jumps around to show off some of the more impressive/enticing story-beats. Movie trailer story structure for Zuda submissions is very similar to its name sake movie trailers. Ghost didn't show enough of the Arctic 'world' for it to have that kind of appeal. If it's comics, or movies a good trailer doesn't mean the actual story will be good. You do a gut check and make your own judgment. On Zuda you make that same judgment with self contained/cliffhanger stories cause it all only adds up to 8 screens. It doesn't work as a self contained 8 screens, because it ends in the middle of the action with a shot being fired. It's intended to be a cliffhanger, but it's not one that is done well. The reason is: no way do I believe John Davis gets wasted. Cliffhangers that involve solo main characters facing immediate peril aren't very good, because I don't believe their getting whacked in screen 9. Screen 60 maybe, but this early no way. Cliffhanger's that set up a danger to your leads family and friends, or some innocent third party is more suspenseful early on. Setting up a impending threat only the hero(es) know about also works. Any kind of moment a reader can't reasonable guess what happens next, is a good one to end on. My guess is John Davis doesn't get shot, or if he does -it's just a first step to fix his amnesia problem. [For more of my views on Zuda story structure (with examples), see this previous post.] My gut check on Arctic: fantastic art got knee-capped by repetitive, uninspiring, and unneeded captions/dialogue. In 52 more screens I don't think that will change.
Posted by RKB at 3:20 PM