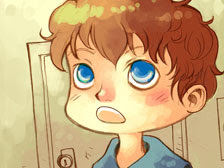 Pavlov's Dream was a January Zuda comic which finished sixth, but is set to continue on off Zuda here. It was created by Shari Chankhamma and Kelsie Yoshida. Here is the synopsis:  The afterlife is different things to different people. To some it's a fiery pit of doom and suffering, others envision it as eternal paradise, and some don't believe it exists at all. Brothers Sasha and Micha never gave it much thought until the day a living shadow enters their lives. Of course, no one believes the tall tales of a sentient shadow Sasha spins, not even his elder brother, until it sweeps both boys away to the land of the dead, a place that is everything and nothing like they'd been told.
Once there they must find their way back home with the help of their new friend and a dead pet goldfish with a penchant for blowing bubbles, avoiding the dangers of a world where just about anything can happen, few things are what they seem, and possessing a pulse makes one a tempting target. But that’s just the start of their adventure, because when the afterlife spills into the land of the living, things really start to get messy.
Now it’s up to two young boys, a wayward spirit and a fish to set things right before the whole world unravels around them.


WHEN CUTE AND CREEPY COME TOGETHER
It's not my go-to genre, but I can definitely appreciate the quality work in this comic. It starts out with Sasha doing shadow puppets on the wall, then the shadow comes alive. It was a well designed screen with very well rendered characters. One of the unique aspects about this comic is Sasha starts out speaking in pictographs as he tries to explain the weird happenings to his family. Sasha doesn't actually speak in words until screen 4, and that doesn't happen till Micha sees for himself the shadow boy on the wall. Between the funny pics and character expressions it works to make readers more curious as to what's going on. Seeing that actual words will be used is a sign in and of itself to readers things are moving on to the next beat of the story. Picto-speak isn't that easy to pull off but it works to convey the excitement of this young child in a more expressive way than just a bigger font could pull off. It also fits into the characterization that Sasha can't slow down enough to be really understood by anyone till his bother knows he is telling the truth. A smart bit of narrative there that takes advantage of the medium of comics. The dialogue-dialogue also fit all of the characters and was just as well done.The colors also aid this comic in pulling off the story-book feel, not too harsh, not too light -it just fits the story.  You have a nicely done action sequence of the shadow boy turning into a bird and leading the brothers into a bureau that happens to be the gateway to the afterlife.


ALL THE PRETTY COLORS OF PARADISE
The afterlife Sasha and Micha end up in is actually a fairy tale landscape style place with big yellow leaves and mushrooms all around. It's a nice -but not surprising- twist on the standard gloom and doom of the afterlife. I also appreciated the technical details of the story AKA effective use of comic book short hand. The creators have the good sense to leave what's unnecessary in the gutters between the panels. As the brothers and shadow boy make their journey to the portal to the land of living  I enjoyed how changing the colorful background conveyed a lot of travel in few panels. The comic ends with the boys crossing paths with the goldfish mentioned in the synopsis and readers get the impression the little band is finally completed and the rest of the story is about to begin. For younger readers, or older readers going for a more up-beat story book read they will probably enjoy this story. The only real failing is it doesn't have that cross over appeal a story like this needs. How many times have you read something and said to yourself 'it isn't normally my kind of thing, but something about this story makes it stand out from it's genre/style confines and grab me as a reader'? That hook that expands creators predictable audience is missing from this comic. If your more into story book tales that skip the grim -then do give this comic a shot over at it's new home.
Posted by RKB at 3:08 PM