Zuda review Fly Me From The Moon/ As Alien was really a horror film, this is really a hardboiled crime story 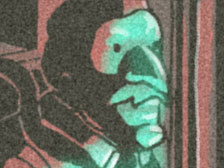 Fly Me From The Moon was a October Zuda comic done by Gabriel Bautista it finished with a final rank of 9th. Fly Me got a favorite from me, here is the synopsis: Titus Simirica is a dead man! What else can be said for a man who is being chased by one of Chicago’s premier mob bosses and a group of mysteriously strong men in black?
The year is 2157, and lunar property is a hot commodity! Moon cheese is no longer a cute children’s phrase, but an incredible raw material found deep within the surface of the Moon. It is refined to produce copious amounts of pure energy, and you better believe it’s pricey!
But what happens when there are threats of civil war on the moon colonies? What if you owned a piece of that highly sought after land? Would you get rid of it, or sit on it?
Follow Titus as he does his best to ditch his lunar property on businessman/crime lord Kevin Harrell, and steer clear from the mystery super men that want their land back!
May lady luck be on his side! GOD SPEED TITUS!

The reason this comic got a favorite from me is because I enjoyed the story (pace and dialogue) so much. The colors are great, and all the letters are completely legible. What brought this comic down is less than impressive art. It's not horrible but it didn't rise to the level of the story, if this was a first time entrant I wouldn't be typing this at all. However, this is Gabriel Bautista's 4th Zuda comic and I expect to see a progression in the art,  not a regression. You expect to see a creator continue to get better, not have his previous art efforts  look so much better. The concept and characterization has improved in Fly Me, so why would the art be left behind? Frank Miller seems out to see how 'cartoony' his style can go in a rebellion against photo-realism, and the work in this comic seems along the 'how loose can it be and still tell a story' variety as well. This doesn't grab me as a reader when a well known artist does it, or someone who is making a name for themselves. Talk your time to do the best comic you can. It's a marathon not a sprint. Don't just send something in you think is good enough to get in, spend the time on it to go for a win. MPD57 has had posts to that effect about various Zuda contestants and that's how I feel about this title. After the first panel overhead shot with the ceiling fan it's the dialogue that draws you in. It's instantly just sounds right and has a ring of truth about it. With only one end of a phone conversation being heard it builds suspense as to what they're talking about. As a reader you can guess it sounds a lot like a phone call that might have been overheard in some real world corporation that was headed for a Madoff style melt down. Light coming through the shutters and the coloring job done on this part saved the lead character from just being a slightly defined glob with good lines to say. It was a nice touch to have the secretary peaking in the room on the last panel of screen 1. Once Titus gets outside on screen 2 in come the reds and greens in the color scheme, which again look fantastic. Titus calls to tell his wife get the hell out of there house, then sets up a meeting with that crime lord mentioned in the synopsis. Harrell the crime lord takes the bait on screen 3 and from the dialogue Titus reveals himself as a smooth operator. On screen 4 we see more of Titus's secretary, and some mysterious men silhouettes in fedora's and overcoats trying to see Titus. Using science fiction for a weirder, more memorable, MacGuffin as well as better technology helps the story avoid having a too stereotypical setting or feel.

Screen 5 is the first big action screen. The three guys in trench coats punch there way through a door, and leave a message with the secretary they want there land back. It is a good start to the story with more than one opponent for Titus. Screen 6 Titus is eating a hot dog, drinking a soda, and talking on the phone to his brother. He finds out the coup he had been earlier warned about has already happened and one ship had left a hour earlier carrying those men in trench coats that are trying to track him down. Along his way Titus drops his food and reveals his plans to get the hell out of dodge by taking his wife from the moon. He says this in the last panel where we see a close up of his feet and the food he had ealier dropped. I'd say this was a impressive screen layout except for the fact the cup of soda was drawn so -abstract- it can barely pass for a cup. Titus comes back to his wrecked office and his secretary Charlie fills him in on what has happened. It's all leading up to the big reveal on screen 8 and I enjoyed how every screen lead you to click to find out what happens next. There was a coup on a lunar base, the Earth President is destroyed, and Harrell wants to even the score for losing his money by taking Titus's wife. The dialogue on this screen from Harrell was very pulpy, wondering why Titus would want to go to a death trap like the moon, then finding out his wife is still there says: "Titus. You are one sick and demented individual." There is still a mystery as to how this happened readers want to have answered, as well as the classic question: what happens next? The script is tight, the art is too loose, and I think Gabriel Bautista should set his sights on doing a better comic than he has ever done before to go for a instant win.
Posted by RKB at 12:06 AM