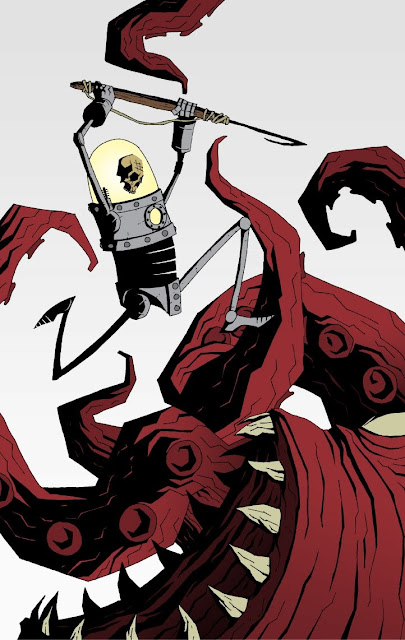 Robot 13: Colossus! is a new print comic done by Blacklist Studios: Daniel Bradford and Thomas Hall. It's up to issue 2 now and can be ordered at there web site, here is a short synopsis: On the surface, Robot 13 is about a skull headed robot who fights giant monsters from Greek Mythology. From a storytelling standpoint, however, it's somewhat a reworking of Frankenstein meeting Homer's Odyssey- it's the story of a thing created by Science who goes on a Hero's journey of sorts to find out who he really is... 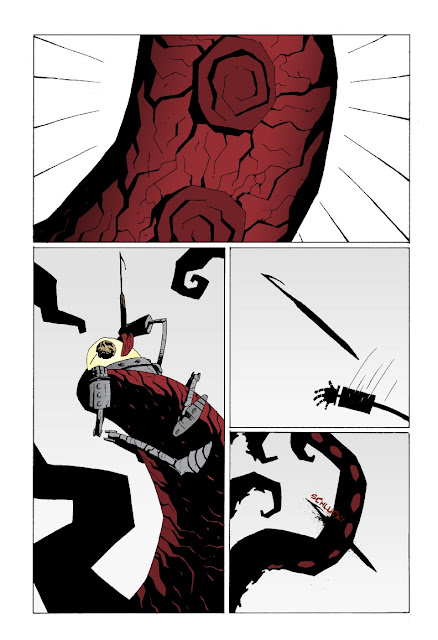 Based on revelations in the second issue it actually has a much deeper theme than just robot vs. monsters, but no need to rush over one of its coolest points. The bulk of Robot 13 #1 is taken up with R 13 getting pulled from the sea, along with a almost instantaneous attack by a Kraken looking sea monster. What members of the crew don't get eaten look on in horror as the fight begins. If your going to draw a western comic you have to be able to draw horses, if your going to draw a comic with robots and monsters you have to be able to make all those critters look cool. looking around in comics shops and online I get a little stunned at how many creators can't pull it off. The creators of this comic didn't just pull it off, they did one of the best action/suspense scenes I've seen in comics lately. In order for readers to take these static images and fill in the blanks between the gutters the art has got to be smooth. You have to be able to draw the figures in conflict from all angles taking advantage of fantastic page composition to wow your audience. I always appreciate it when a character is fighting for there life (or to avoid being crushed into recyclable materials in this case) they don't spend a lot of panels blabbing as they fight. Never mind being realistic, too many word balloons hinder the art, and can slow the action packed pace down to a crawl. In this issue you have a mostly silent fight scene that lets the great art really grab hold of the readers. There are no unnecessary panels everything is done mindful of the 24 page economy to give readers the most bang for there buck and page count. As I said at the start you get more than just an amazing battle sequence. The Robot doesn't know who or what it is, or from whence it came. There are some tantalizing flashbacks that serve to get you wondering about it's origins. A doctor smuggles the robot out on a ship, then casts him adrift in a small boat so he can be free. The robot's confused state, unable to understand human concepts, is well done with the added benefit his confusion about what's going on in the world is one of the most human emotions a character can have. The robot on his little boat promptly gets attacked by a giant lobster that he begins fighting it out with. There is a nice movie like transition shot between the giant lobster in the past to an image of a regular lobster in the here and now being skewered and inspected by the robot. In a nice touch R 13 brings the monsters eye on board and the ships captain says he could make some money showing it off to people. 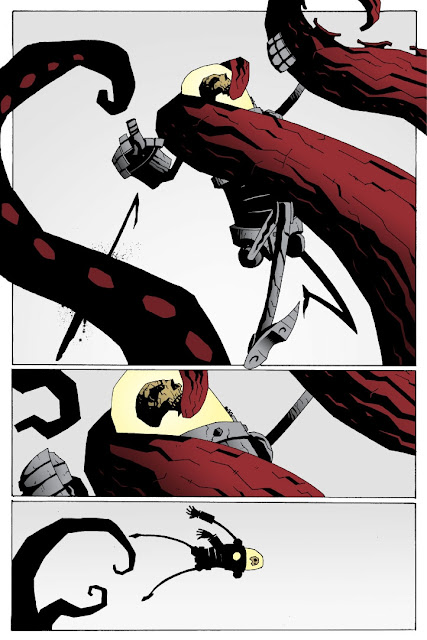 No worries -R 13 is monster and rust resistant

Issue #2 provides a fight with a phoenix, and more clues to R 13's past and purpose. Whenever you have a unnatural creature fighting it out with monsters there will be a Mike Mignola/Hellboy comparison. The art does show a Mike Mignola influence along with old school newspaper adventure comic strip feel. It's important to remember everybody has influences (including Mignola), and it all probably traces back to a creative arts troglodyte who drew mammoths on cave walls better than anyone else. Everyone wants to take what has gone before, build on it, and go off in there own direction. The art here does just that with a number of standout pages which are perfect in conveying the story. The letters are well done, and the colors fit the story so well -it's just another reason to read it. Once you can see the art is there, the next question is what about the story? What makes Robot 13 stand out is all of the back story and future hinted at in issue #2. R 13 is a monster magnet, this issue it's a phoenix and ends up konked out in a snow bank found by a man and his dog. The dialogue between R 13 and a sailor serve to give a good insight into what the robot is thinking and foreshadowing of the upcoming conflict. It also serves to avoid text box thought balloons which I love. The issue opens with a memory that reveals the possible origin of R 13's creation, and closes with the reveal of its ultimate foe.The comics opens in the ancient world in Crete as the greatest minds in there world plan the creation of a 'man of bronze' champion to defend the people from dark threats. The comics ends with Echidna 'the mother of all monsters' wanting to know where the murder of her children are. A oracle and her teacher are trying to tell her, but in typical oracle fashion the pronouncements are murky. Echidna gets angered and the results are predictably gruesome. Issue 1 was the set up, issue 2 reveals enough you think you know what's going on, but you're not sure, and you still want to read the details. Long ago all the Daedalus types got together to invent a mechanical man to face off against the various man eating monsters in this world. That's  just enough of a hint at what's going on, and a peak at the future to make readers want to pick up the next issue to see how it goes. How did we end up with version 13.0 of the metal man? How was this robot created? Ancients embracing technology to protect them from the monsters of their myths can touch are kinds of areas dealing with humanity, or the lack of it. When you have a concept timing is also important.  lately there has been a number of special on the History channel and elsewhere, about ancient peoples being more technological advanced then modern people had wanted to give them credit for. Ancient computers, mechanical weapons, clock-work inventions created by people so far ahead of there time it's not even funny. Some of the stories about statues of gods 'coming to life were true', but what the people then didn't know was it wasn't supernatural forces, but engineering smarts that lead them to move. It is rather cool to see a comic making use of these concepts. In Robot 13 the monsters are real, and the technology is even more advanced. Magical vs. science -with belief on both sides- in a showdown  makes for a amazing story here. The dialogue and art work together to tell a very entertaining story, which I'm sure is only going to get better as more issues are released. It's a title you should differently check out