Zuda review Evil Ain't Easy/ Either I'm dreaming or I've lived through this before... 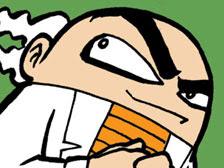 Evil Ain't Easy was a October Zuda comic done by Seth Wolfshorndl that finished up ranked number 4. Here is the synopsis: He may have a Destructo Ray that can level small cities, but that doesn’t help this evil genius deal with the mundane annoyances of everyday life. The diminutive Dr. Nimbus must wade through taxes, rent, gas prices, and even poor customer service in his quest to eventually rule the world. Along for the ride is his newly created henchman (which may or may not be a good thing).


Gag-a-day strips are the Kudzu of online comics

There are so many comics online, more than a few on Zuda, you really have to do something different to stand out, and this strip didn't grab me. The art is cool, the story has some funny jokes, but the field is just too crowed. Humor comics are generally not my go to genre, being good wasn't enough for my vote -you got to be great. The artist is very good at making Dr. Nimbus's face very expressive, especially in the last panel on screen 1 with the sigh. A mad scientist who's having problems paying the bills in this economy should be low hanging comedic fruit. You have 2 kinds of comedians: story-tellers, and the ones who tell jokes. Considering the market you can't be Larry The Cable Guy, you have to channel Rodney Dangerfield. Joke, after joke, after joke, every panel you got to hit the readers with something. Better still hit the readers with 2, or 3, or more somethings every panel. Will there be more misses that way, sure but quantity counts, make up the laughs in volume like Wal-mart does sales. There is such a number of 'set up for the last panel punchline' comics out there, it ends up becoming one big haze where nothing stands out. Screen 2 is a good example of Gag-a-day. On the top of the screen we have a high price of gas joke, on the bottom half a fast food ordering joke. Besides throwing in the bits about being a mad scientist you could probably put any character in the same set-up. Screen exploits the mad scientist background for more than a Dr. Drakken style monologue. Dr. Nimbus is out to find himself a henchman with the job interviews not going well do to yuppie slacker monsters. We see part time monsters, benefit package seeking monsters, and disrespectful monsters, leading the Doctor to create his own henchmen. The sound effects and sight gags are very good in the last few panels of screen 4. The lights go out when Dr. Nimbus plugs things in, the coloring effects and sound effects were very well done. Comedy strips have it tougher on Zuda, and you have be able to bring more laughs with the dialogue.


We don't meet the sidekick until screen 5, what's up with that?


Lothar is the green skinned Frankenstein stoner type Dr. Nimbus created to be his henchman. Buddy comedy is always funnier, the gasoline and pickle jokes could have been dropped for more of this. Lothar has no real respect for Dr. Nimbus, and his dim incompetence makes for a nice contrast with the mad scientist. Screen 6 had some nice exchanges between Lothar and Dr. Nimbus, and great choices in the layouts of the panels. I'd like to see Seth Wolfshorndl back in Zuda with a non-humor comic. Screen 7 feature the appearance of a recurring foil in Mrs. Brewster Dr. Nimbus's landlord. He tells her Lothar is his nephew, you know that's a prelude to comedy hi-jinks. All of these events, the buddy, the foil, should have happened earlier on in the story to increase mine and other readers interest. It still would have needed something else to really stand apart from the masses, but the strip would have been more on its way. Screen 8 ends with Mrs. Brewster telling Dr. Nimbus his rent was due last week, and his sad admission he must go out and find a job. Ending up in the top 4 is a good sign, but comedy is a the hardest way to go on Zuda. The art, colors, and letters are all there, but more funnies in the dialogue. The stuff with potential didn't happen until the end, screen 2 could have never been there and the comic would be better for it.
Posted by RKB at 2:55 AM