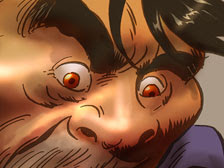 Children of the Sewer is a comic done by Benito Gallego. It got a favorite from me, and my vote. Here is the synopsis: Edmond Ratt is a serial killer. While stabbing a woman in the middle of the street he is spotted by two Police Patrol Officers and escapes seeking shelter in the city sewers. He immediately feels like home in that dark, wet and stinking place.
After killing the police officer who was chasing him Edmond is captured by two strange and pale men who belong to an unknown race called “The Children of the Sewer”. They are born, live and die in the city sewers and rarely go up to the surface. The two men carry Edmond through tunnels and passages to the lair where more people like them dwell.
Their leader, a hulky man called Shlyder, challenges Edmond to a fight to the death. Edmond defeats Shlyder and is about to kill him but when he hears the shouts of the people of the sewer encouraging him to do it he hesitates: for Edmond killing is a way of gaining satisfaction through an antisocial and contemptible behavior. His aggressivity can’t be expressed in a consenting environment.
Shlyder see his opportunity and tries to strike Edmond from behind but Khela, one of Shlyder's women warns Edmond who instinctively hits him and makes him fall to a waterfall drowning in the filthy residual waters.
Edmond becomes new leader of the Children of the Sewer but has little time to relish. He must face mutant monsters that stalk the hidden pipes and tunnels of the underground and fight the enemies that oppose him to rise an incipient empire in the drains. But the biggest threat will be Forensic Psychologist Zoraidh Cripst. She has come to the sewer and is after him!


Benito writes a synopsis the way I write a review ;)

The art does remind you of John Buscema, and of the old EC comics stable. The lead character being a serial killer who goes underground and meets the sewer's denizens makes the story bride the gap between a Marvel or Atlas/Seaboard bronze age comic, and quality crime comics like Crime SuspenStories/ Crime Does Not Pay. Completely legible font (I hate text box thought balloons, but they're mostly well written), and the colors are something else that make this comic stand out. Having a character that can only 'enjoy the kill' when he gets to proper response is a nice nod to Sin City: That Yellow Bastard, among other works. The story opens with Ratt lying in wait for some poor unsuspecting girl to get closer. Having a first screen give you a reason to click to the next isn't uncommon on Zuda, but having a story that you can follow without the synopsis with almost nothing lost is. Screen 2 is the screen that really stood out to me. The artist/writer creator does not let the words cramp the art. It also helps that Benito is a good enough artist to really convey emotion in his characters faces. Panels 3 and 4 came off as dueling primal screens in depictions that linger on the brain. From the set-up it's obvious there will be a number of action scenes in this title, which Benito handles quite well in fluid figures. The police show just in the nick of time and chase Ratt away down a sewer. The text box thought balloons actually pay off in this sequence as what you see in the panels isn't what's going on in Ratt's mind. The whole thing is a trap for Ratt to get close to the cop and carve him up. Screen 4 is the first time we see this creator's imagining of a sewer and it's a well done background. If your going to set your comic in a sewer you need to be able to draw a scary sewer, which this creator does. I don't even want to know what makes the water green...With the text being short and to the point you get all the insight you need into Ratt's thoughts and motivations.


Having a 'bad guy' as your lead

Screen 5 is the confrontation between Ratt and the cop, which is a nice action scene. Screen 6 is where the sewer people finally make an appearance. As Ratt is standing over the police officer's body in ankle deep sewer water they capture him. The actions scenes are so well done with a easy to follow page layout. The only miss being Ratt's thought balloons "his thorax was wrecked" was a clunky thought to have unless he used to be a doctor. "Make them pain, I'll let them do" stream on consciousness style following along is hit and miss at best. Most of the text on this screen was a miss, we don't always have to read what Ratt is thinking. By now every reader should have a good grasp on the way Ratt 'reacts' pull back on the text and let the art be even more amazing. Benito does some nice design work on the sewer people  which you see as they rope Ratt then knock him out with a sewer pipe. The big eyes, pale gray skin, made me wonder just how many times someone had pissed in there gene pool. As you read this comic take time to enjoy the backgrounds (Benito draws a mean sewer), and a little 'old school' panel layout. Screen 7 did a good job in mixing up the close-ups and long shots of the two 'children' carrying off Ratt. Panel 4 was my fav here, Benito can also draw a mean rat. Screen 8 gets to the reveal of the rest of the children of the sewer as well as there slur for normal -looking- folks calling Edmond Ratt "you tanned". It's a cool reveal to end on, and the text box thought balloons here were well written, and gave useful insight into Ratt's future plans. It would have been nice to see at least a panel, or two of Zoraidh Cripst, maybe a cut away to her starting on the case, just to establish Ratt's other major foil. It could help with readers who are looking for a more rootable character to follow along with.  In the comments section on this comic there is a question about the reader investment potential of a story with a unsympathetic lead character. It's not a issue with me because I like the villain on the run stories, and seeing a story mainly told from the other perspective from time to time. Readers don't know how this story will end, but the introduction of Zoraidh Cripst tracking him down for justice will change things. Readers can root for Ratt to reform, or hope Zoraidh tracks him done and makes him pay in a showdown. There's always the potential the whole lot could be eaten by a giant sewer gator. Readers just don't know yet how things are going to play out in Children of the Sewer, but will want to find out what happens next.
Posted by RKB at 3:41 PM