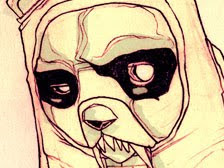 Brother of Bronze Hammer is a November Zuda comic done by Andrew Alexander. It got a favorite from me, here is the synopsis: Brother of Bronze Hammer: The Three Bears
Gritty Tale of an underdog who beats the odds?
Silver leaves his desert farm home to find his sister who was kidnapped the previous night.
The kidnappers (and murderers) ended the lives of his father and older brother in the process, leaving their bodies as Silver's only means of tracking them. And if that wasn't enough...
Colony One
A crime filled trade city, a resting place for the scum and filth outside of the desert. This is Silver's first destination.
The Six Shadows
A mysterious group of Shades (or Desert Sorcerers) that also have plans for Silver's sister.
Lord Kresster
The king of the desert and all things around it. Is he to blame for Silvers problems?
A world with no boundaries and unexpected twists and turns..
Can a sixteen-year-old boy save the day?

Do people in hell (or a desert) want a drink of ice water?

In this flip reworking the Three Bears are total bastards who kidnapped  'Gold Lock', and Silver sets out to find them. It's a sepia tone comic set in the desert sands so everything is the color of parchment. It did make the comic stand out this month, but it might have been even better with more color added. The art is a minimalist style, or Alexander hates drawing backgrounds, either way it works in the page layout. It stands apart as something different than the expected which helps a lot on Zuda. The first screen of Silver standing there with two little sand dunes/hills in the far background is a good indication of the style of this comic. The font on the letters is one size too small, but the text box thought balloons work for this story. The first two screens are shots of Silver looking severe, and filling readers in on the high points of the synopsis with his thoughts.  In between the focus on all the stares there is a close up of a sword Sliver is wearing. All the text is on one panel of screen 2, the 'I'll make the kidnappers pay' style dialogue might of had more meaning superimposed over the sword in the scabbard panel. I enjoy the art style of Alexander otherwise I wouldn't have been able to take all those 'glamor shot' style head shots of Silver. Screen 3 opens with a shot of the entrance to colony 6 nice design on that, and one of the bears is talking about how they got the gold, and Gold Lock is locked up. The character design on all the bears is done very well as they're all memorable looking obviously reprehensible bastards. A part of this comic that really shined is the way Alexander handles the dialogue throughout. On screen 4 two of the bears have this exchange: "Wonder what's so special 'bout her that the six shadows want her?? Maybe we shoulda asked for more money.." to which bear number two responded "Don't overthink it... we're good either way and the jobs done. No looking back.." That's some great hardboiled goon dialogue, all the more enjoyable because you don't expect it to pop up in a fantasy story.

With screen 5 we see all three bears including the little pissed off midget bear. The more thoughtful bear in the middle was amazed they could get away with it, which was a obvious foreshadow of a fight scene. The few panels per screen do cut down on the action impact of each screen. Screen 6 had midget bear rambling along, then seeing Sliver show up in the distance hidden in shadow except for his eyes. Screen 7 is a full screen shot of Sliver flying through the air with a sword to attack bear number one. This is a good action screen which sets up an expected cliff hanger. Screen 8 was a good screen layout which got away from some of the stiff head shots earlier in the 8 screens. the first was a neat looking shot of the after effects of bear number one getting sliced and diced. Bear number two said your going to pay for that, and the last screen managed to introduce a new character -a female bounty hunter. If those first screen text box thought balloons had been worked into screen two you could of had more of a fight scene without losing the back story.  A sped up pace could have giving readers more story, but the dialogue was excellent throughout. The art you will either enjoy, or not -but you reaction to it won't be meh/ with a shoulder shrug. Plenty of promise enough to get a favorite, but not enough to get my vote. I'd enjoy seeing future comics from Andrew Alexander in the Zuda contest.
Posted by RKB at 4:44 AM