Zuda review Old Cthulhu's On The Rise/ walking in the foot steps of Lovecraft... 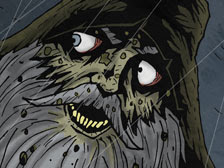 Old Cthulhu's On The Rise is a October Zuda comic created by Daniel Tollin. Here is the synopsis: Sam and Matt are hiking along the English coast when they loose their way and strange sounds start to call out in the night. Something predatory is following them! That’s when they stumble upon Howard, a farmer who warns them of being in the marsh at night and brings them to the town of Old Innsmouth. Old Innsmouth seems at first just a sleepy old town but as Matt’s and Sam’s stay is prolonged due to bad weather they slowly realize that something is not quite right. The townsfolk are overly fond of late night swims in the freezing Atlantic Ocean, and they seem to have more in common with fish or frogs than mammals. However, Everything is not all bad; Beth, the beautiful girl who works in the local pub, has charmed Matt. And though they appear strange, the villagers are friendly. But one night shortly after their arrival, Sam sees something hideous out in the marshes. Something is devouring a poor girl. Scared out of his mind, he races back to the town and tries to convince the villagers that there’s a monster lurking in the marshes.

Believe it or not, werewolves aren't the problem...
This comic started off with a American Werewolf in London tribute as two American backpackers walk down a English road. The balloon font could be bigger, but colors really suit the comic. By screen two you feel Sam's pain at being dumped, and see a quaint Lovecraftian Elder gods star symbol left on a marker. I'm not a big H.P. fan, but I know that symbol is bad news, the two guys just see it as a joke. One of them also makes a Night of the Living Dead reference "They're coming to get you, Barbara!' as a joke. Some good art in the characterizations on these guys faces, it helps a reader 'hear' their words in the right tone. Then they're scared by a odd sound behind them, and this is the impetuous to click to screen 3. With all the reference dropping it certainly brings to mind films like Scream, with the characters aware of all the horror cliches. So much possible foreshadowing is also like having a flash-light shined in your eyes. 2 screens are spent on the two leads running away from the scary sound before they encounter the mysterious stranger. On screen 5 we see the messed up looking human/creature named Howard giving the expected warning about how dangerous it is at nighttime. Unlike with Scream, Old Cthulhu's On The Rise doesn't pull off letting the characters and audience in on the joke. In only 8 screens of a Zuda submissions you don't have that much time to grab readers with a interesting twist, while making genre references and doing the first leg of a Scoby Doo style chase. You have a couple of screens in this comic that seem like they were just in there to set up lines, or try to build suspense. In only 8 screens you don't need to give the ending away, but you do need to move things along. If we had actually seen some of the other towns people I would have been more impressed with the pace.

The Gorton's fisherman freaked a frog-girl in merry old England once -with predictable results
Old Innsmouth is the name of the locale, and a pretty good tie-in with Lovecraft's Innsmouth. The rain throughout this story is a pretty good effect. The wide-open eyes really accentuate the characters fear (Sam and Max), or frogieness (Howard) as the case may be. The art was creepy as hell, and helped the story a great deal. Screen 7 uses see through word balloons to indicate whispering. It just looked weird (not in a cool way) to me, and took me out of the story. Screen 7 has Howard giving Sam, Max, and the readers the low down on Elder signs and Ancient Ones. The second panel on screen 7 had a nice effect keeping the two leads in silhouette as Howard continued on giving them his speech. It made me wish, for once, characters would turn around and go the other way when confronted with a creepy old man leading them to a creepy old town. Screen 8 is a little shot of the town, and a close-up on Howard having some green tentacles coming out of his mouth. It's the typical cliff hanger ending they're just about to go into the town... I figured from the synopsis/first screen the comic would probably end just before the characters get into Old Innsmouth, and I was right. A story that much 'in the mold' isn't going to stand out on Zuda fighting it out with 9 other contestants. I enjoyed the art, but a number of screens seemed wasted on characterization that was accomplished by screen 2. It was too much of a expected cliff hanger, it would have been nicer to see more of the town/its people. If Beth was important enough to mention in the synopsis, it would have been nice to see her in the 8 screens. I hope to see Daniel Tollin back in the contest being more daring in his story's structure.
Posted by RKB at 10:42 PM